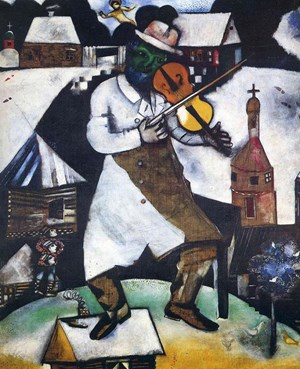 The Stedelijk Museum Amsterdam has rounded off a major five-year research project into the material and technical aspects of the nine paintings by Marc Chagall (1887-1985) in its collection. Internationally, it is the first survey to examine a group of his paintings in such depth, and in relation to one another. The results are of significant value to art historians and conservators all over the world.

The Stedelijk Museum Amsterdam has rounded off a major five-year research project into the material and technical aspects of the nine paintings by Marc Chagall (1887-1985) in its collection. Internationally, it is the first survey to examine a group of his paintings in such depth, and in relation to one another. The results are of significant value to art historians and conservators all over the world. They provide new insights into the structure of his paintings, the media he used, his reuse of canvases, alterations to compositions, painting technique and pigment use. The Stedelijk offers a unique context for this project given that the nine famous paintings in the collection span 35 years of his oeuvre, which enables the works to be compared with each other.

The outcomes of this five-year project will shortly be published, in full, in English in the German scholarly journal Zeitschrift für Kunsttechnologie und Konservierung.

The Stedelijk collection of 40 works by Marc Chagall is internationally considered to be one of the finest of its kind and includes nine iconic paintings – six owned by the Stedelijk, and three on long-term loan from the Dutch state, via the Cultural Heritage Agency. The paintings cover a period of 35 years and thus a large part of his working life and, as such, form a representative body of work ideally suited to studying Chagall’s working method and its development. Over the last five years, the project examined the condition of the works, Chagall’s technique, and the materials he used, to gain a better understanding of his intentions, working methods and what motivated certain choices.

One of the most notable discoveries is the drawing underneath the painting The Synagogue at Safad, Israel. Infrared reflectography reveals an entirely different scene concealed beneath the painting. 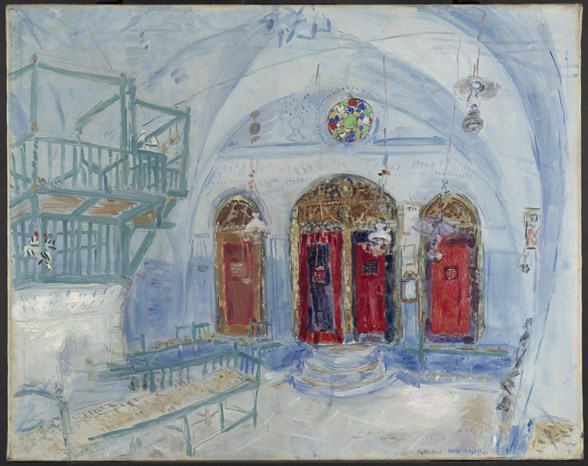 Marc Chagall, 'The Synagogue at Safad, Israel', 1931. c/o Pictoright Amsterdam / Stedelijk Museum Amsterdam. Restored with the generous support of the participants of the BankGiro Loterij

When this horizontal canvas is turned a quarter of a turn, the underdrawing shows a striking number of similarities with another painting by Chagall, namely the portrait of his daughter, Ida at the Window, which is also in the collection of the Stedelijk Museum. In the examined group of works, there was no other underdrawing found of an entirely different subject. In most cases, his underdrawings related to the composition of the painting. In this work, he abandons the cubist-folklore-inspired style of earlier paintings that blend dreamlike depictions of his fatherland with his new life. 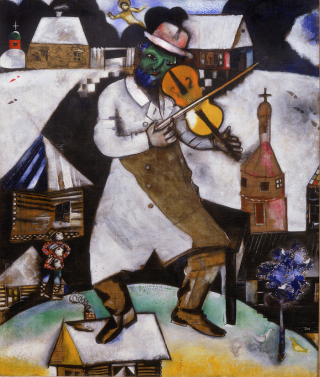 This type of tablecloth is typical of those woven in Vitebsk, the town where he was born and where his wife Bella was staying for the meantime. Perhaps she gave him the tablecloth as an extra memento. Because The Fiddler was painted on a tablecloth, the work is particularly fragile given that tablecloths have a looser weave than canvas. Moreover, Chagall did not use any primer in this work. The underdrawings in The Fiddler show several minor changes in the background. Here, Chagall for instanced sketched a small character wearing trousers patterned with stipples, his arms above his head, reaching for something in the tree. The figure wasn’t realised in paint.

In the painting Love Idyll the conservators discovered that the green in the painting was much lighter than it currently appears. The discolouration that has occurred requires further research into the chemical behaviour of some of the pigments Chagall used. This is all the more important now that the project has established that Chagall used at least eight of the same pigments throughout his career.

Eight of the nine paintings included in the project go on display on 21 September in the exhibition Chagall, Picasso, Mondrian and others: Migrant Artists in Paris. Drawing on the rich collection of the Stedelijk Museum, the show features work by more than 50 visual artists, photographers and graphic designers. What’s more, it’s the first time in almost 70 years that visitors will have a chance to see the Stedelijk’s extensive collection of Chagalls: 40 artworks, including eight seminal paintings, some of which were restored specially for the exhibition.