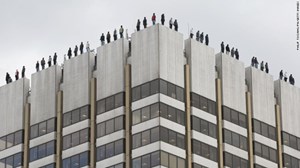 On Monday March 26th, Londoners woke up to the haunting site of 84 life-sized sculptures of adult men, perching precariously on the edge of a rooftop on the cities South Bank Promenade.

On Monday March 26th, Londoners woke up to the haunting site of 84 life-sized sculptures of adult men, perching precariously on the edge of a rooftop on the cities South Bank Promenade.

The figures, created from packing tape, were placed on top of the ITV buildings in central London to represent the average of 84 men who commit suicide in the UK every week. They were installed on the rooftop overnight as part of a campaign called Project 84, which has been launched by the charity Campaign Against Living Miserably, or CALM.

Shockingly, suicide is the biggest killer of men under 45 in the UK and 3 out of 4 suicide victims are male. Despite these statistics, the issue rarely gains press attention. Every two hours, a man in the UK takes his own life. "As a society we have to move past embarrassment and awkwardness, we have to face this awful issue, discuss it and actively work to stop it," said CALM CEO Simon Gunning. “Underpinning this campaign is hope, hope that by telling these stories we can all better understand the complexities of suicide and strive for change.”

The artist behind the work is American artist Mark Jenkins who was chosen to create the piece thanks to his growing reputation as a skilled street artist who uses urban landscapes as his ‘stage’. In the past, his work has often drawn the attention of local police, although Project 84 had full permission to create this piece. Jenkins creates hyper-realistic sculptures and often places them in spaces where the public are likely to interact with them. For Project 84 Jenkins collaborated with Sandra Fernandez.

Each of the 84 figures in the installation piece represent a real man who lost his life to suicide. Their individual stories have been documented on the Project 84 website with the help of friends and families of the victims. 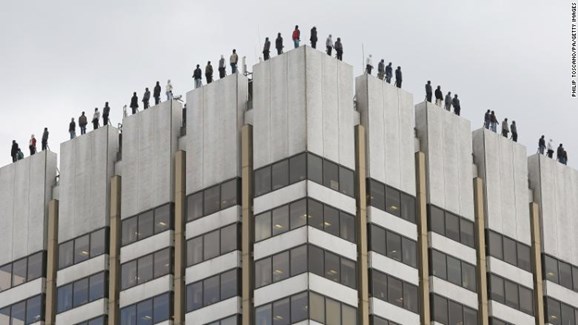 The installation piece is set to remain on the ITV rooftops until April 1st and is accompanied by an online petition that asks the government to make suicide prevention and support a government issue.