A Look Inside the Box 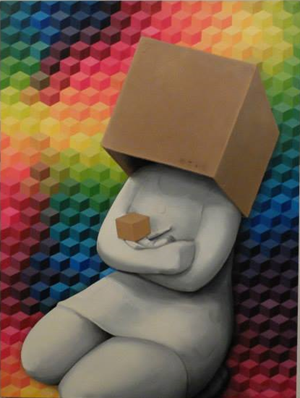 On the walls of Amsterdam, London, and other cities in Europe you may come across a girl with a box on her head. Artdependence Magazine interviews Begoña Toledo to find out more about the artist, the girl inside the box, and the fluidity of street art.

On the walls of Amsterdam, London, and other cities in Europe you may come across a girl with a box on her head. Boxhead, as she is known, started out small: she literally grew in size and recognition, moving from hand-made stickers onto to paste-ups, then walls and eventually canvases. The evolution of Boxhead follows the evolution of artist Begoña Toledo who, through this character, has found a way to express herself in a number of ways, exploring different mediums and roaming through creative spaces, both on and off the streets. Artdependence Magazine interviews Toledo to find out more about the artist, the girl inside the box, and the fluidity of street art.

AD: You’ve lived and worked in Barcelona, Amsterdam, and now London. How do you see the differences between these cities regarding their urban spaces, the possibilities/restrictions, and their respective art scenes?

Boxhead: I lived in Barcelona for nearly 8 years, including my university period, so I guess I was very influenced by what was going on in the faculty etc. It is such a vibrant city, Amsterdam or London are incomparable to it. Although London is definitely full of creative people, here there’s a stronger feel of competition. Amsterdam has got a small but healthy scene, Boxhead was born there, so I can’t say anything bad about it! The main factor that differentiates these cities is their architecture. Barcelona and London seem friendlier to street art than Amsterdam in the sense that they both have more empty walls to paint.

There was a time when all graffiti writers and street artists were anonymous. The rise of social media and the growing acceptance of these practices led many street artists into the public eye, especially as they transitioned from the streets into galleries and curated group shows. How did it feel when you first “came out” as the artist behind Box Head? In that same line of thought, by showing your work off the street you came face to face with your audience, who were previously as anonymous to you as you were to them – what was your initial reaction to this?

Well, before Boxhead I already did art that sometimes was shown in galleries, so I guess I didn’t really feel the transition that much in that sense. I do enjoy chatting to people that have been following my work in the streets and we get to meet face to face in the gallery space. If I think about it, I actually interact with the audience much more when I paint in the streets than when I paint in the studio…

You do commissioned mural work, and you also work with and create products: hand-made box head figures, prints, t shirts, paintings, greeting cards; you’ve added your character to shoes and sunglasses…For the Moniker Art Fair last year you built a life-size Box Head that allowed visitors to see the world through her perspective. Could you tell us a bit more about this installation? In addition, having all your work centered on this one character feels like you’re building a brand and it seems that by limiting yourself to one subject you in turn have the liberty to explore different methods and techniques. How do you see this progressing?

It was great being part of 2014’s Moniker Art Fair, it’s meant a pick in my career for sure. I had the opportunity to work with technology in my installation thanks to a sponsorship by Kaspersky, so I decided I wanted to do something interactive. I’ve used technology before in my work, before Boxhead, and what really fascinates me is the possibility to get the public, the spectator, involved, to make him/her a real participant of the piece. So that’s what we did. We made a box that people will put over their heads and inside there was a screen, connected to a computer and a camera. The camera was pointing out of the box and the computer was rendering the camera input live into a 3D cubes version of the person’s view from inside the box.

I always wanted Boxhead to be a brand. I do feel sometimes that focusing just on “her” could be limiting, but actually only I can make it “limiting”. I’m in the process of finding new languages in my work, and they all include Boxhead. Soon you’ll see some the results. She’s evolving! There’s so many stories I can tell through Boxhead, “she” is just a channel at the end of the day.

Previously, the only way to discover graffiti and street art was to personally explore the urban space. Now, in all the major street art/graffiti cities – New York, London, Berlin, Barcelona, Melbourne, etc - you come across a variety of “street art tours”.  Now, you also have Google’s recently launched virtual library of street art and graffiti from all over the world, complete with audio tours that invite you to “explore the stories behind the art”. What do you think of these various on-site tours, and Google’s virtual tours?

I haven’t thought much about the Google Virtual Tours to be honest. Street Art Tours have their pros and their cons. If the guide is good and keeping him/herself updated with what’s happening in the streets you can learn a lot in one of these tours. You can discover techniques and little anecdotes that will be very hard or impossible to find out by yourself. In the other hand, they are still tours, which means they have an itinerary and a time frame to complete. So you might be missing something great just because you’re following a structured way of walking those streets.

You recently took part in a curated street art show, Manorism, in which several street artists created a series of pieces especially for the exhibition, which took place in and around a large warehouse space in Manor House, North London. Street artists exhibit more and more frequently off the streets, but even so the label is used to identify their work. Under the changing circumstances of the street art scene, how are we to understand this label?

There’s nothing wrong in showing the non-street related work of some artists in a gallery. In this particular case we painted big murals in a big old warehouse, so it’s kind of still “streety”; it’s a public space. But we should stop using the word “street art” when it’s not in the street, period. I consider myself an artist, sometimes I paint in the street, sometimes I paint in my studio. Loads of galleries are using the “street art” label to sell their exhibitions better. I always found it such an obvious incongruence…

You were featured in Bust Magazine’s article, 8 lady street artists cooler than Banksy; you also took part in last year’s Femme Fierce, the UK’s largest all-female street art festival, which made the Guinness World Record in 2014 for largest collaborative mural. Generally, how do you view the effect of the ‘female’ label on artists, and particularly within the scene of graffiti and street art?

Same story… When I did Femme Fierce last year I was supporting a friend of mine with a big vision. It was great to be part of the event and I met some beautiful people through it, some of them I consider my friends now a days. After the event I was called to be part of several exhibitions labeled “Female Street Art”. Double trouble there. It just was ridiculous at some point. Exhibition names like “She Can” appeared on conversations I had with gallerists, and I just couldn’t believe my ears. I believe in equality. I don’t want special treatment. I don’t need it. I don’t want to be named “female” every time my name appears on a magazine or blog. Why? Women might be underrepresented in some fields, but do we want to be overrepresented?  Why do I have to be compared to Banksy just because I’m a woman? I don’t get it…Banksy didn’t make it that far because he is a man… I want to be valued for the quality of my work, not because I’ve got a vagina.

All images courtesy of the artist.