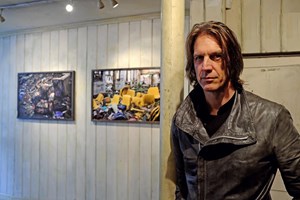 A man spends his days exploring demolition sites in China. He takes continual photographs, literally thousands. He selects the best photographs, selects resonant details, prints them and paints them with varnish. He does this freehand; it requires five layers, so the painting on each takes two days’ solid work. He frames the results, beautifully it must be said, in reclaimed wood from the field and shows them in a credible Soho gallery.

A man spends his days exploring demolition sites in China. He takes continual photographs, literally thousands. He selects the best photographs, selects resonant details, prints them and paints them with varnish. He does this freehand; it requires five layers, so the painting on each takes two days’ solid work. He frames the results, beautifully it must be said, in reclaimed wood from the field and shows them in a credible Soho gallery.

To all outward appearances, Graham Fink is just one more mid-career artist. Ballads of Shanghai is his third solo show at Riflemaker on Beak Street. In China he’s shown twice. But to most people Fink is an adman, rather than a visual artist. He is after all Chief Creative Officer at the China arm of illustrious agency Ogilvy & Mather. He is, one imagines, in no urgent need to sell these works. If you didn’t know just how time consuming his practice is, you might call him a hobbyist.

Fink cuts a rebellious figure in long hair and leather jacket. But despite his advertising fame, he has no apparent self-importance. He talks about his work in unpretentious terms, telling me his interest in visual dereliction stems from his childhood, rather than post-structuralist theory. He shoots and paints ‘beauty’, rather than critique, and in this sense he might be breaking a contemporary art rule. One also suspects he knows this, and more to the point that he doesn’t care too, too much about it. 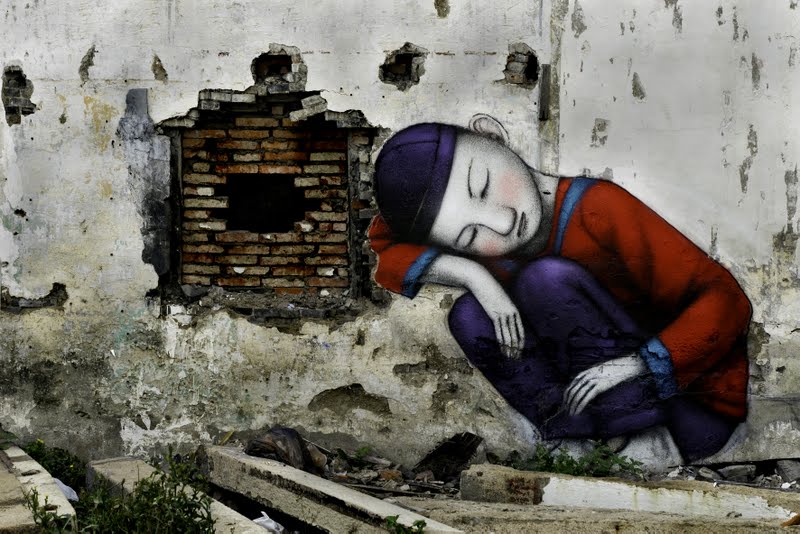 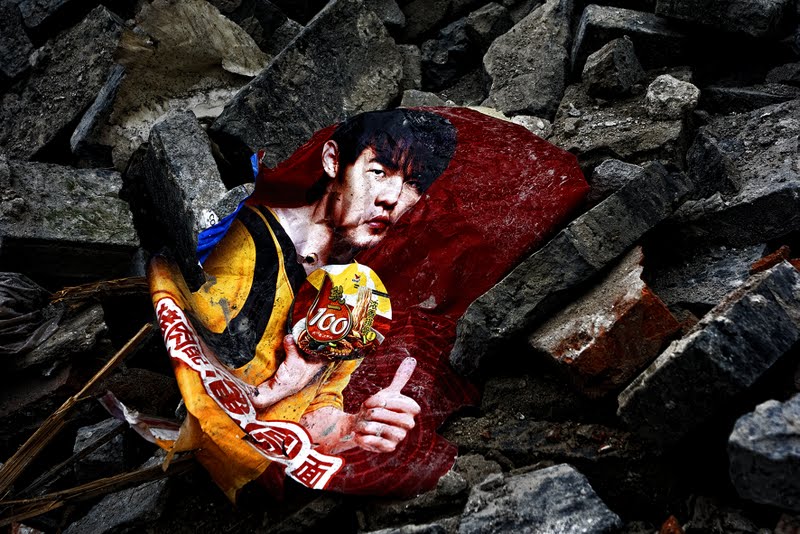 When asked about the artistic reception of his work, Fink is realistic and positive. “I’ve talked to a lot of people . . . about this,” he says. “Some of them say to me, ‘To be really honest with you, 50 percent of the art world will always think you’re a total prostitute and will never take you seriously’.” The adman/artist tells me he responds by thinking: “I’m alright with the 50 percent who do take me seriously, because I am very serious”.

To compound his twofold CV, when Fink compares art and advertising, he expresses some views that won’t be popular. “I think at it’s very best advertising is a form of art,” he says, before giving a shot-by-shot account of a 1978 cinema commercial for Benson & Hedges. It involves iguanas, a helicopter, an empty swimming pool, a frogman and views of Death Valley. Few could disagree with the argument that this film, by movie director Hugh Hudson, has a surrealist pedigree.

“I think there’s a lot of similarities,” says Fink of both art and advertising. “People say to me, ‘You don’t have clients in art,’ but you do! I remember reading Gombrich’s The Story of Art and about how Michelangelo had huge rows with the Pope about the Sistine Chapel”. He says this with no sense of self-aggrandisement, but an innocent love for his first chosen profession, the chance to work on, “amazing pieces of communication, great films, and 48-sheet posters, which to me are like big canvases”.

When it is put to him that some advertising has a parasitical relation to fine art, laid-back Fink is almost heated. “Was it Picasso who said, ‘Good artists copy, great artists steal’?” he asks, with a rhetorical dismissal of such concerns. What follows is an interesting digression about attitudes in his adopted homeland: “In China, what they realised after the Cultural Revolution is they were so far behind the West that they needed to catch up fast, and the fastest way to catch up is to copy”.

“But if you think about it,” he continues, “All the truly great artists would copy the great masters to learn how to draw and how to paint”. It is not quite the same as the much-publicised objections of artists like Gillian Wearing or Fischli & Weiss, but what Fink says about the issue should also be taken on board. “I think you’ve got to do that [to copy] and there’s a point that happens where you think, ‘I don’t need this anymore. I can sort of break free’.” 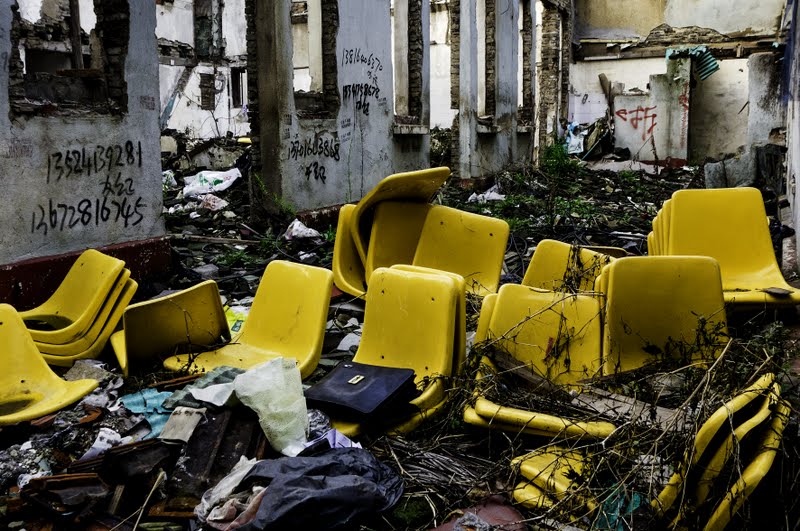 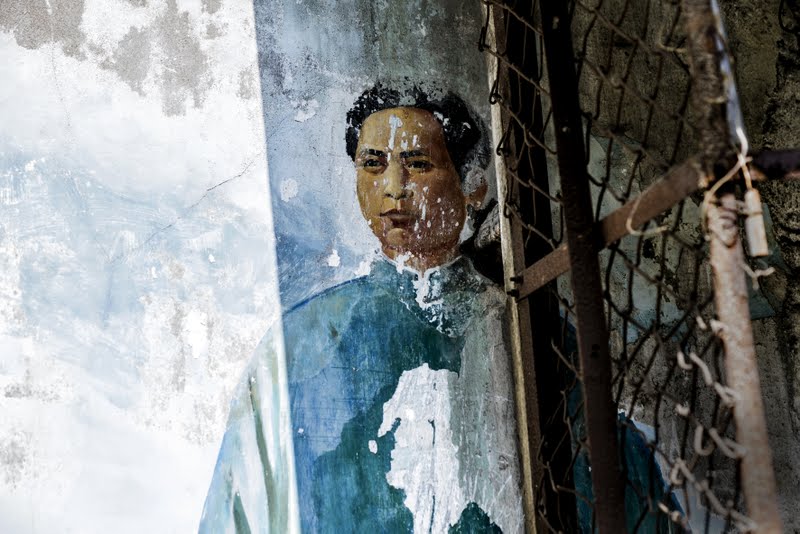 The best way to avoid plagiarising artists is to surely bring them in to work for you. Fink still has a clear passion for the talents of those he has worked alongside since joining his industry, with the groundbreaking agency CDP: as well as director Hugh Hudson, those include Alan Parker, David Puttnam, Irving Penn, and Don McCullin. Indeed it is hard not to envy the clubbable art director when he recounts his experiences wandering the London streets with a Magnum photographer, shooting reportage scenes for a commercial for the Metropolitan Police.

It soon transpires that, as an art student, projects like this were the industry bait for Fink (and many like him before and since). “The more I found out about it, it was all these things I wanted to do. It was filming. It was printmaking. It was working with filmmakers and photographers and making stuff and designing stuff…”, he says with an enthusiasm that hasn’t waned. “And I thought, What an amazing job! And I just thought it was a job where i could be highly creative and do all these different things, so that’s what I did”.

Perhaps advertising is just some parallel art world where people trade artistic freedom to get more money to do the things they, on the whole, love. Fink has no time for the virtue of starving for your work. “No wonder these artists talk about being poor with the cost of materials,” he says. “Do you have to be poor in order to [make art]? No I don’t think you do. Yeah, I think it helps if you’ve got a job which can pay for some of your materials.” 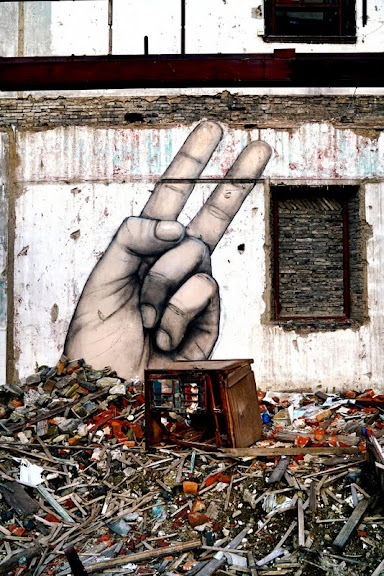 Peace amongst the pieces. Copyright and courtesy Graham Fink

Now at least the global advertising executive has a chance to earn back a few pennies as his work goes up for sale in the West End. But he has already found that self expression comes at a critical price. As we gaze upon his perfectly manicured scenes of demolition, he tells me he showed these photos to some of the Shanghai locals with whom he works, and they complained it was a negative portrayal of China. Fink responded that he found them to have great visual appeal.

“Because I think when you are totally in the moment, when you really really look at something, and you lose the meaning of what it was, and what it’s going to become, you just come to be with that object and I think that is when it gets exciting,” he enthuses. He doesn’t do art speak or starvation but, perhaps remarkably for an adman, Fink does do winning sincerity. “I do find them, as images, incredibly beautiful.”