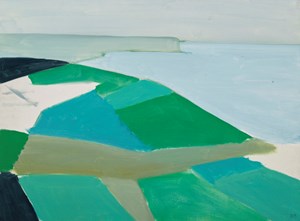 A steep cliff - majestic and austere - takes shape on the horizon of Cap Blanc Nez by Nicolas de Staël. In front of the cliffs, the juxtaposition of colours draws the eye to a beach of fine sand beneath a verdant moor, the one that covered the Côte d’Opale in July 1954. And yet the painter is not at all a magician of reality.

‘Nicolas de Staël borrowed everything from nature except its image,’ said the critic Roger van Gindartaël (quoted in Nicolas de Staël, Rétrospective de l’oeuvre peint, exhibition catalogue, Saint-Paul-de-Vence, Maeght Foundation, 1991, p. 88). What he painted first was the arresting light of the North Sea, the saline mist that clung to the skin, the murmur of the wind against the cold rocks—an immediate impression, in short, of a landscape observed by an eye witness. 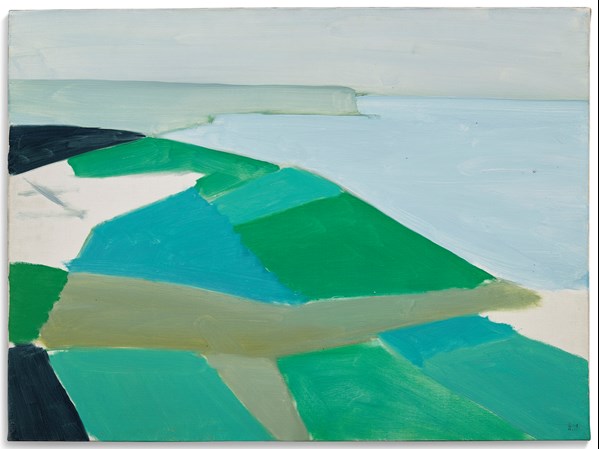 Cap Blanc Nez is part of the frenetic reconquest of the real that took hold of de Staël in 1952: his abstract vocabulary began to bend to a subjective perception of the world. Produced in the summer of 1954—the painter’s last—the work attests first and foremost to a final renewal in his use of materials. The thick paste which de Staël until then had sculpted with a knife morphed into a light material applied with a paintbrush in fluid, nearly diaphanous dabs. Colour alone creates the landscape. Pale, opalescent blues form the sky and ocean on the right. In the foreground, sparkling harmonies of emerald green and jade, verging on aquamarine, adorn the dune.

Under the smooth paint, the white plaster appears transparent. It separates the encompassing strokes, and even depicts on the canvas the white sand and luminous reflections of the cliff.

De Staël’s new painting surprised critics. In February 1954, he had a show at Paul Rosenberg’s in New York. The American public was smitten; all the paintings were sold. In Paris, he presented his latest works at Galerie Jacques Dubourg in June the same year. But the press was quite harsh, sparking doubt in the painter. Over the course of 1954, de Staël became increasingly isolated. In September he moved alone into a studio he bought in Antibes. Cap Blanc Nez is the fruit of this troubled period: the painter’s solitude is evident in the deserted landscape.

Populated with bright colours, his Cape was no less a subject of wonder, as André Chastel described it: ‘Rarely has a man more uncompromisingly preserved that aptitude for bedazzlement which the routine of life can so easily dull or erase […] Vigilance for the unexpected. This attitude to life was fully projected in the painting’ (quoted in Nicolas de Staël: L’Impatience et la jubilation, exhibition catalogue, Saint-Paul-de-Vence, Maeght Foundation, 1972).