After fair report on the results of Art Basel Miami 2017 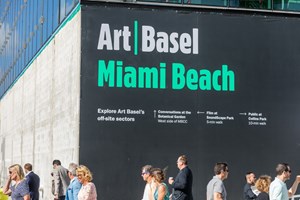 This Sunday, December 10, 2017, Art Basel's 16th edition in Miami Beach closed following strong sales across all levels of the market and robust attendance from international collectors and institutions. This year's show saw the debut of a new floor plan and show design, which was widely praised by exhibitors and collectors alike. The show, whose Lead Partner is UBS, featured 268 premier galleries from 32countries, who presented outstanding works, ranging from Modern masterpieces to contemporary painting, sculpture, performance, photography, works on paper and film – some of which were created specifically for the fair.

Noah Horowitz, Director Americas, Art Basel, commented: '2017 was an important year for our show, as well as for the city of Miami Beach. We were thrilled to introduce the enhanced show design and new floor plan, and it was the first year that Philipp Kaiser curated our Public sector in Collins Park. Additionally, with the launch of The Institute of Contemporary Art, Miami and the re-opening of The Bass, Miami continues to grow its world-class presence as an arts and culture destination. We are already eagerly anticipating next year's edition when the renovation of the Miami Beach Convention Center will be fully completed.'