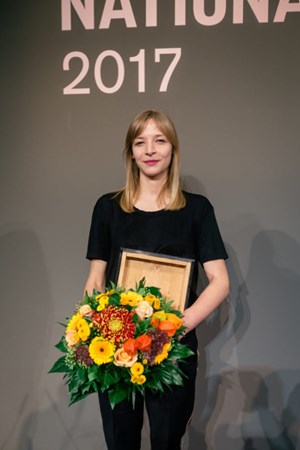 On the evening of 20 October 2017, in the presence of State Minister of Culture Monika Grütters, the winner of the Preis der Nationalgalerie was announced in an award ceremony at Hamburger Bahnhof – Museum für Gegenwart – Berlin.

On the evening of 20 October 2017, in the presence of State Minister of Culture Monika Grütters, the winner of the Preis der Nationalgalerie was announced in an award ceremony at Hamburger Bahnhof – Museum für Gegenwart – Berlin.

With the award Agnieszka Polska wins a major solo exhibition next year in one of the Nationalgalerie’s institutions as well as an accompanying publication.

The jury congratulates each one of the artists for their excellent and thought-provoking exhibitions here at the Hamburger Bahnhof – Museum für Gegenwart – Berlin. After a robust discussion of all four artistic positions, the jury decided to award the Preis der Nationalgalerie 2017 to Agnieszka Polska. Throughout her work, Polska ingeniously interweaves some of the most pressing issues of our time. She deftly creates a poetic and affective relationship between the visual and acoustic language of our digitally infused daily lives by using contemporary imaginary and cultural references–including scientific theories, early animation, and the utopian inclination of the avant-garde. In her exploration of multiple temporalities within our universe she destabilizes the very notion of humanity and humanness. As the personification of the sun in her film states: “My gaze was moving at constant speed, and everything was becoming irreversible the moment I observed it.” We look forward to seeing Agnieszka Polska’s exhibition at the Nationalgalerie in autumn 2018.

Agnieszka Polska, I Am the Mouth, (film still) 2014. Courtesy of the artist and Galerie Zak, Branicka, Berlin.