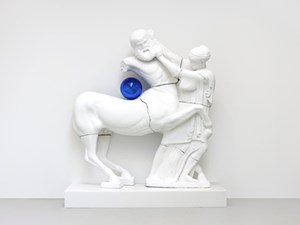 Artdependence can reveal that a legal case between art dealer David Zwirner and Old Master dealer Fabrizio Moretti has now been settled amicably. The $6 million case revolved around a work of sculpture from artist Jeff Koons.

Artdependence can reveal that a legal case between art dealer David Zwirner and Old Master dealer Fabrizio Moretti has now been settled amicably. The $6 million case revolved around a work of sculpture from artist Jeff Koons.

It is understood that Moretti had purchased the sculpture, known as ‘Gazing Ball (Centaur and Lapith Maiden)’  believing it to be one of a series of 4, including one artist’s proof. Moretti claims that Zwirner knowingly attempted to sell him a version of the work numbered as ‘2’, which was clearly fabricated after the edition labelled ‘3’ which had been sold at auction. In addition, Moretti contends that contrary to the original understanding, in addition to the 4 works Zwirner had confirmed, additional ‘prototypes’ were released.

Originally, the claimant was looking for $2 million in damages, but an amended complaint filed in August 2016 increased the claim to $6 million. Moretti claimed that Zwirner had engaged in “chicanery” and played a game of “three-card monte” with the editions.

According to the New York Arts and Cultural Affairs Law, “a purchaser has a right to be given as much information about the piece of sculpture as is known to the seller.”

Moretti’s London-based company, Blue Art had refused to take delivery of the sculpture and Moretti’s lawyer released a statement saying “The law is very strict. If you say it’s an edition of one of four, you can’t hide that there is an additional sculpture by calling it a ‘prototype’”.

The lawsuit was brought after a version of the work failed to sell at Sotheby’s in New York in May 2015. It had been estimated at $1.8-$2.5. Moretti claimed that this failure to sell demonstrated a reduction in the value of the work.

Artdependence contacted Moretti’s lawyer to find out whether the case had been resolved. The lawyers confirmed that Moretti and Zwirner had issued a joint statement: “We are pleased that the case has been resolved amicably, and Mr Moretti and David Zwirner are looking forward to doing further business together in the future.” The lawyers have also confirmed that Mr Moretti’s company, Blue Art, will now receive the sculpture into their collection as part of the settlement.