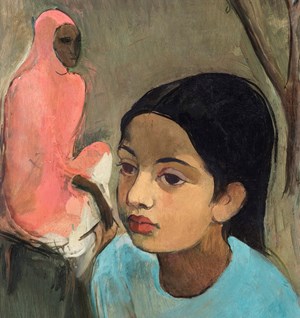 Eighty years after Amrita Sher-Gil’s The Little Girl in Blue was last seen in public, the exquisite painting will be offered for sale at Sotheby’s in Mumbai in an extremely rare appearance of the artist’s work at auction.

Painted in India in December 1934, when the artist was just 21, The Little Girl in Blue depicts the artist’s 8 year old neighbour, Lalit ‘Babit’ Kaur. Her mother, Lady Buta Singh, was a close friend who lived next door to Sher-Gil’s paternal uncle, Sunder Singh Majithia at Nowshera House. 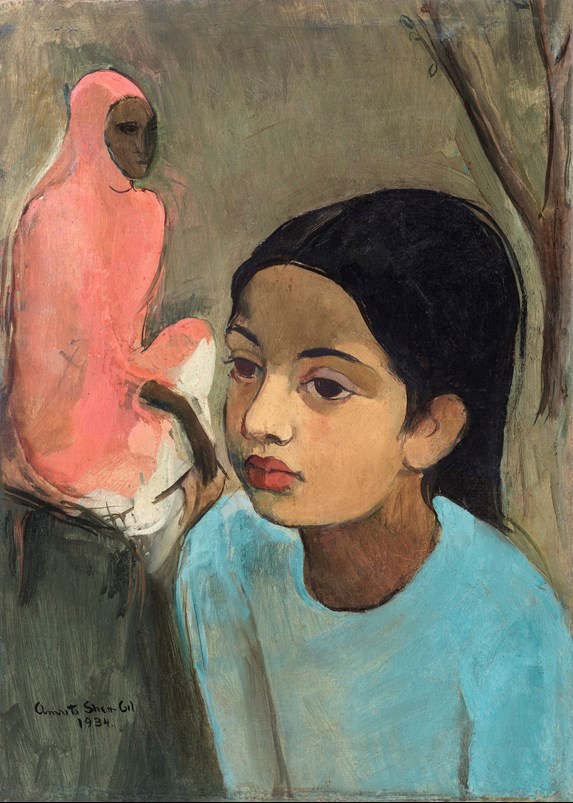 Born in 1913 in Budapest, Sher-Gil grew up in a cultured and intellectual family who initiated and supported her early interest in art. Her mother was a Hungarian-Jewish opera singer and her father was an Indian Sikh aristocrat and scholar. She lived in Hungary, India and Paris during her lifetime, and her art embodies a bohemian combination of east and west.

Sher-Gil moved to Paris in 1929 when she was 16, studying at L’Académie de la Grande Chaumière and later at the École des Beaux-Arts. Whilst in Paris, she was exposed to the work of Paul Cézanne, Amedeo Modigliani and Paul Gaugin. She was particularly enamoured with their uncanny ability to blend the old with the new. Much like Gaugin’s depictions of Tahitian women, Sher-Gil’s paintings were stylistically simple yet visually complex.

The painting has been treasured in the same family collection ever since it was acquired at the artist’s first solo show in 1937 by Charles Fabri – an eminent art critic who is rumoured to have become the artist’s lover.
Very rarely does a singular event leave its mark on the collective perception of a culture of a period as that week in November of 1937 when this painting and its companion works were unveiled in Sher-Gil’s inaugural exhibition at Faletti’s Hotel in Lahore. The landmark exhibition would fundamentally change the perception of Indian audiences towards contemporary art forever. 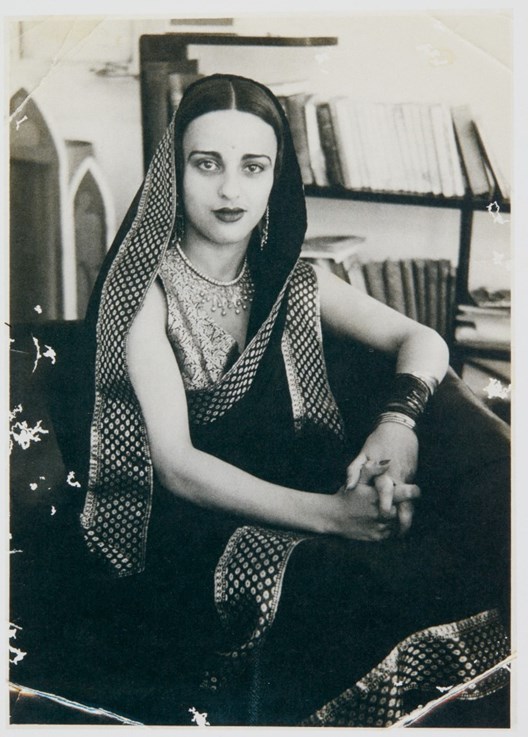 Embodying a bohemian combination of East and West, Sher-Gil’s work belonged to no particular school or style of painting. She forged a revolutionary new path informed by her experiences in Hungary, Paris and India, creating a body of work that was simultaneously aggressively modern and decidedly Indian.

At a time when most artists portrayed women as content and compliant, Sher-Gil’s treatment of female subjects was singularly unique, revealing their loneliness or silent resolve. This was perhaps a reflection of her own isolation in a life caught between different worlds. Nonetheless, she came to be seen an arbiter of style in India, a symbol of the glamour of the inter-war years. When the elites of Lahore arrived to view her exhibition in 1937 they are said to have come as much see Sher-Gil as to view her art.

Now, ahead of Sotheby’s Boundless: India sale on 29 November, The Little Girl in Blue will be placed on public display for the first time since Sher-Gil selected the painting for her inaugural show.

The ‘little girl in blue’ is otherwise known as Babette Singh Mann, a sprightly woman of 92, and one of the very few remaining people who would have personally known Amrita Sher Gil. She recalled sitting three to four times as her mother kept admonishing her not to fidget. She was likely chosen for her high cheekbones and a remarkable resemblance to Sher Gil. However, when faced with the finished portrait, Lady Buta was aghast because the painting did not look realistic enough and did not make Babette 'pretty' (i.e. fair-skinned) enough.

Sher Gil was said to have replied, “If you wanted a replica then you need a photographer.” Sher Gil then told the family that she would re-use the canvas but instead she kept the work for her first solo exhibition in Lahore held three years later. However, to Babette and her family, they were convinced that the portrait was destroyed until she saw it again recently as it was publicised for the auction.

Amrita Sher-Gil
THE LITTLE GIRL IN BLUE
Estimate:
1,003,350 -1,475,515 EUR
This lot is a National Art Treasure under Indian Law and is subject to restrictions, including those applicable under the Antiquities and Art Treasures Act, 1972. This lot may not be exported outside of India by any person other than the Indian Central Government or any authority or agency authorized by the Indian Central Government.
Signed and dated 'Amrita Sher-Gil / 1934' lower left
Oil on canvas
18 ⅞ x 15 ⅞ in. (48 x 40.6 cm.)
Painted in 1934