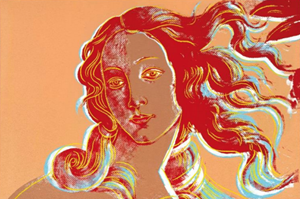 Christie’s Post-War and Contemporary Art Auction, part of ‘20th/21st Century at Christie’s’, a season of sales that take place from 20 February to 7 March 2018, will present work by some of the greatest icons of the 20th Century alongside those artists at the forefront of contemporary art today. The season will be led by Andy Warhol’s Six Self Portraits (1986, estimate on request, illustrated below), a rare masterpiece completed just months before his sudden death in 1987. The present work stands among his last great artistic gestures, his selfimage charged with a poignant sense of his own mortality.

Taking on the grand tradition of self-depiction in a manner unprecedented within art history, Andy Warhol assembled six distinct variations of his iconic 1986 ‘fright wig’ self-portrait, creating a unique sequence that stands alone within his oeuvre, titled Six Self Portraits. His disembodied face emerges from darkness in six intimate 22 x 22-inch canvases, alternately pink, pale blue, lilac, orange, green and cobalt against a void of black. The ‘fright wigs’ are widely considered to represent Warhol’s most deeply personal revelations, stark, rarefied exposures of an artist who ultimately became a greater cultural icon than his most famous celebrity muses. Six Self Portraits was unveiled at Anthony d’Offay’s London gallery between July and August 1986 – the first and only self-portrait exhibition of Warhol’s career. Works from this exhibition now hang in the collections of Tate, London, the Metropolitan Museum of Art, New York, and the Carnegie Museum of Art, Pittsburgh. Warhol’s red Birth of Venus (After Botticelli) (1984, estimate: £4,500,000-6,500,000, illustrated above), one of just six large-scale images of Botticelli’s iconic goddess from the Details of Renaissance Paintings (Sandro Botticelli, Birth of Venus, 1482) series, is also offered in the Post-War and Contemporary Art Evening Auction.