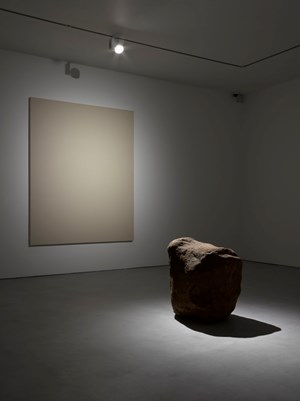 This week Lisson Gallery opens its doors to new solo exhibitions from two artists, both with different approaches and goals to perception, interested in exploring what it is to be human in the deepest sense: Anish Kapoor and Lee Ufan. While Kapoor fills the space with colour and energy through his visually stunning works in bold and bloody red, which connect immediately to our most primary senses, Lee forces us to slow down, to really spend time in the room surrounded by the pieces, to gradually be translated to a peaceful place and experience a feeling of emptiness.

This week Lisson Gallery opens its doors to new solo exhibitions from two artists, both with different approaches and goals to perception, interested in exploring what it is to be human in the deepest sense: Anish Kapoor and Lee Ufan. While Kapoor fills the space with colour and energy through his visually stunning works in bold and bloody red, which connect immediately to our most primary senses, Lee forces us to slow down, to really spend time in the room surrounded by the pieces, to gradually be translated to a peaceful place and experience a feeling of emptiness.

Kapoor returns to Lisson Gallery, where he started exhibiting thirty years ago, with several new paintings and small-scale sculptures. The artist states that in this show he approaches two different types of interiority. One is reminiscent of our human interior in a physical and literal way, using visceral expanses of red to create flesh-like paintings. Perhaps he has used red to provide the pieces with a more realistic look, or perhaps because, as he says: “red has a terrifying kind of darkness which I always find fascinating”. This style is also visible in his previous mechanised installations, such as My Red Homeland (2003), Svayambh and Shooting into the Corner (both 2009).

Through sculptures that fold in on themselves, reminding us of l’origine du monde, the artist offers a gateway to a different kind of interiority. On this occasion he uses pink onyx and, once again, his famous mirrored surfaces, which incorporate the viewer and his surroundings, making him part of the artwork in both a physical and metaphorical way. 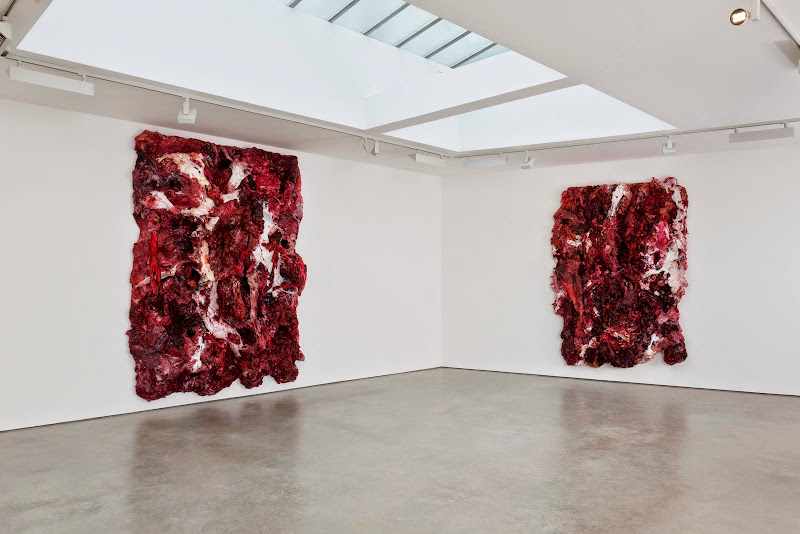 The show represents another manifestation of Kapoor’s interest in the Greek legend of Marsyas, whose skin was flayed by the Greek god Apollo and whose name was used as the title for the artist’s 2002 Turbine Hall commission at Tate Modern. For him, this is not a new journey, but a continuation of the same concerns. While his installation at Tate was impactful for its dimensions and uniformity, the works at Lisson Gallery are much more evidently related to visceral human experience.

Kapoor is convinced that an artist shouldn’t have preconceived ideas of what they will express through an artwork before creating it. One can’t plan to do a work about death or about beauty. It is about having confidence enough in the process. He compares the act of creation to going to the psychoanalyst: you go there, lay on the divan and start to talk. And suddenly there is a whole other thing in the room that is neither you, nor the psychoanalyst; it’s a third element that has been given permission to exist through the space you have provided. Perhaps when one stands in front of the pieces displayed at Lisson Gallery there is an on-going act of creation that allows an extra element of the pieces to emerge. 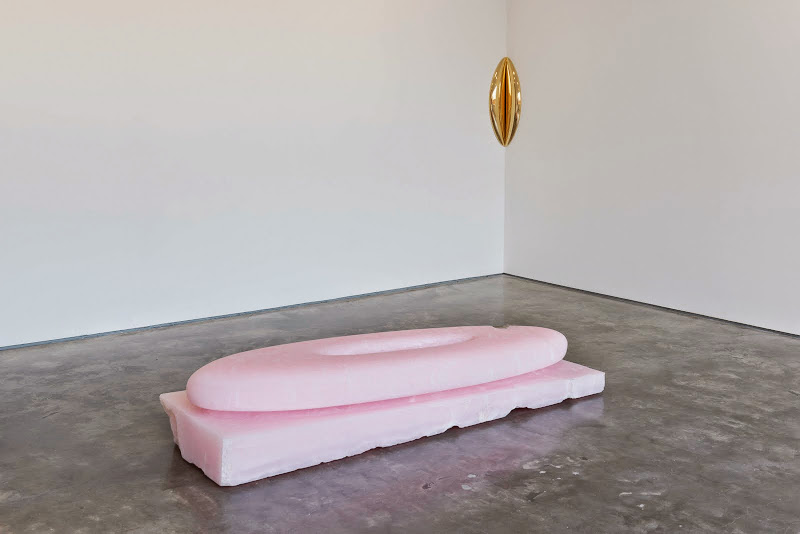 This year Kapoor is also preparing for his largest public exhibition to-date, for the palace and gardens of Versailles (from June to October), where the other artist displayed in Lisson Gallery, Lee Ufan, exhibited his pieces in 2014.

Lee Ufan is a painter, sculptor, writer and philosopher born in 1936 in Kyongnam (South Korea) and based in Japan since 1956. He is especially known for being the main theorist of the Mono-ha (Object School), which rejects Western notions of representation to focus on the relationship between materials and perceptions above expression or intervention.

Lisson Gallery displays two of his famous sculptural compositions, using rocks and two-dimensional surfaces. In this instance, in the minimal and placid backyard of the gallery we can contemplate Relatum-Rest (2013), a composition of a light-coloured rock and a black iron plate that illustrates Lee’s idea that the artwork exists together with the world. In a more intimate and dark space, we find Dialogue – Silence (2013), a rock placed in the middle of the room facing a hanging virgin canvas that seems to stand on an altar. 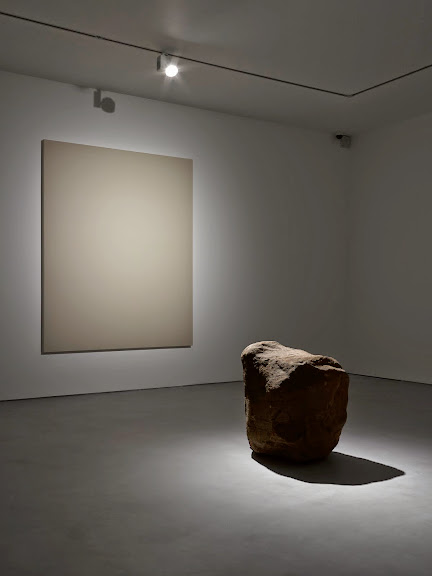 These installations emphasise the importance of the relation between objects, space and events. For this reason, his artwork, whether paintings or sculptures, change depending on the spaces where they are displayed: “With my artworks people tend to take a picture just of the canvas, and that is what you will see in the catalogue, but that´s not the art, that´s not the work. It’s one little hint, one little point in the art. The art is in the space and in the relationship with the work. It looks different depending on the space it is placed in. It’s not the same anywhere you put it,” he explains. “Before the exhibition I came here several times, to look at the space, how the work would be placed, the lighting: the natural lights, the spot lights. It seems simple but it’s actually much more complicated. My work needs to be displayed in a way that is simple but also interesting.”

“This place is something that I put a lot of thought into,” he says, referring to the work on display at Lisson Gallery. “It’s a small space, but you’ve got transitions in it: you come in and you go down, then you go up around there. That also gives another layer of richness to how people can experience the work in the space.”

The space, then, is important, the pieces are important, the composition is important. What is not there is important. In Lee Ufan’s artwork, the idea of experiencing nothingness is integral. To achieve this he reduces the making to increase the not-making. Gesture and the body play a key role in the creation of his pieces. To create his series of minimal paintings Dialogue he enacts a sort of ritual, slowly applying a brushstroke while holding his breath. He repeats this action on the same area of the canvas, applying multiple layers of the same colour, the result being a work where painting and not painting have a similar importance. 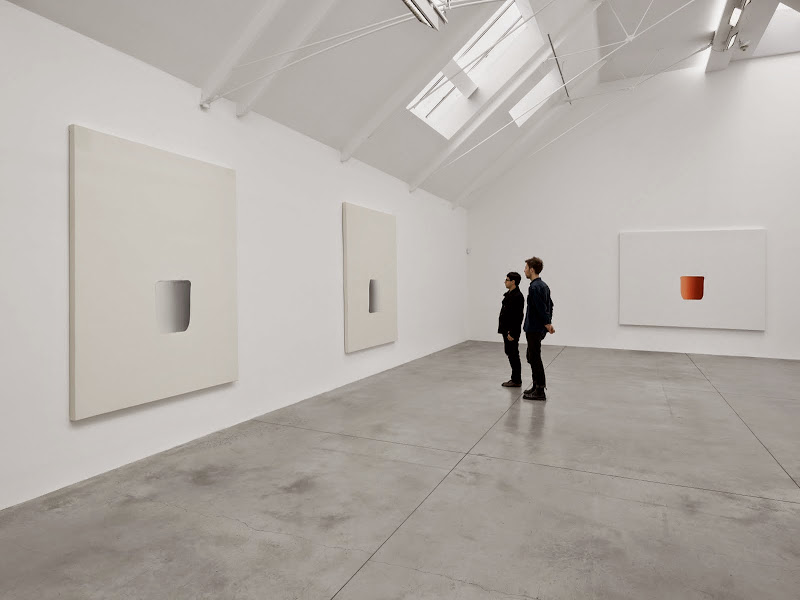 For this series he has mainly used neutral colours, especially grey. “It’s a very difficult colour, it’s not in nature and abstractly is also a difficult colour to work with. But I use stone pigment for the grey, so I think it’s fitting to create something that is pure”. However, he has recently incorporated stronger colours to this group of works, including blue, red and green, although he states that this is a way to experiment and, basically, to have fun: “I started feeling that my thinking is very simple, very restricted and I wanted to try and relax a bit to create something different, to try a bit of colour. My main colour is still grey, but I just started to add a little bit of colour recently.”

Both Anish Kapoor and Lee Ufan are artists with a special approach to space and the relation that humans have with it, especially considering that the empty space is also part of the structure or the oeuvre. These two solo exhibitions will be on in Lisson Gallery until 9 May.

Find out more about the exhibitions of Anish Kapoor and Lee Ufan.