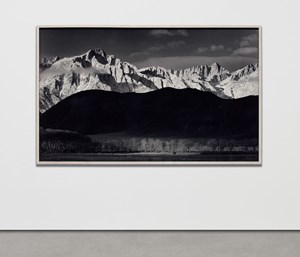 The majestic mural-sized photograph offered here is distinguished by the presence of Ansel Adams’ signature label, which was sent to the current owner in 1969. Adams typically did not sign his murals; the flush-mounted presentation left no border for him to sign, and he was unwilling to write directly on the surface of a print. After acquiring this photograph, the owner reached out to Adams to ask for a signature and a statement of value for insurance purposes. Adams replied with a boldly signed and titled label to be placed on the reverse of the mural’s mount, and a typically genial letter, both of which accompany this lot.

No other photographer of his generation experimented as adventurously or successfully as Adams with larger print sizes. The technical challenges of producing a compelling print in this size were considerable, and few photographers in the first half of the 20th-century had thought of making images beyond the standard formats. Adams’ success with larger print sizes was trailblazing in his own time and was prescient of the current trend in photography in which larger prints by contemporary artists predominate.

Adams’ murals have their origin in the desire for public art in the 1930s. The first notable display of photographs in this format was The Museum of Modern Art’s Murals by American Painters and Photographers exhibition in 1932. In his introduction to that show’s catalogue, Julian Levy identified the difficulties of creating a photograph in grand format: ‘A good photo-mural is not merely the mechanical enlargement of a small photograph. The enlarged mural is a new and independent production, and the photographer who does not visualize in advance the final scale of his picture will usually be surprised and dismayed by the results.’ Adams met these challenges head-on with a characteristic combination of enthusiasm and technical virtuosity. 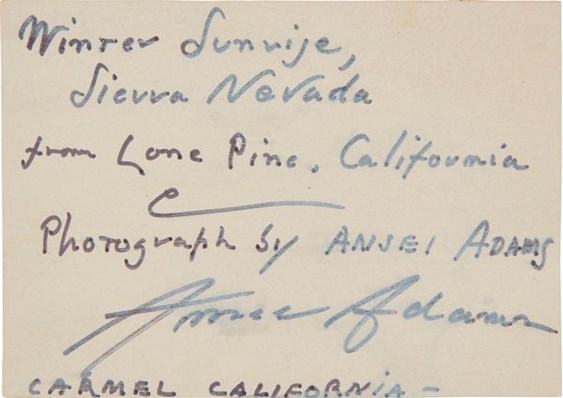 Adams created his first murals in 1935 when he received a commission to produce wall-sized prints of Yosemite National Park for the Yosemite Park & Curry Company. He continued to refine his technique through the following decades as other commissions and opportunities arose. In 1941 he was hired by the United States Department of the Interior to produce a series of murals for the Department’s Washington, D.C., offices, although World War II prevented the completion of the project. Making large prints was time-consuming and costly, and most of his mural work was produced for corporations such as The American Trust Company (later Wells Fargo) and Polaroid.

In 1940 Adams published an article entitled ‘Photo-Murals’ in U.S Camera magazine, establishing himself as an authority on the subject. With characteristic humor, he dubbed mural-sized prints ‘enlargements with a vengeance,’ and further stated, ‘Apart from optical and technical considerations, the size of the photograph has an expressive relationship with the subject.’ Adams was particularly attuned to the effect a print’s scale would have on a viewer, no matter the format he worked in. His 1944 image, Winter Sunrise, Sierra Nevada from Lone Pine—with its sweeping horizontal bands of light and dark tonal values—made an especially successful transition to the mural format yielding an impressive and immersive print. It is arguably the ideal expression of this dramatic image. 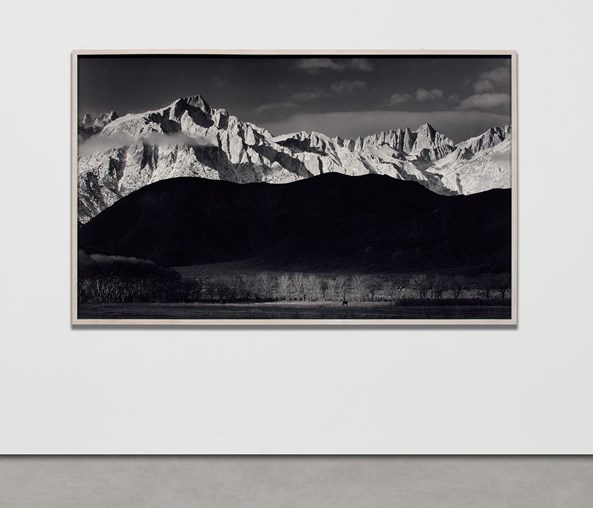 Adams made Winter Sunrise, Sierra Nevada from Lone Pine while photographing the Japanese relocation camp at Manzanar. Adams’ photographs of the encampment of over 10,000 Japanese Americans who had been forced from their homes by the War Relocation Authority were published in his 1944 book Born Free and Equal: The Story of Loyal Japanese-Americans. One December morning during this project, Adams awoke before dawn and drove with his wife to nearby Lone Pine. After setting up his 8-by-10-inch camera on the specially-built platform atop his car, he waited for the right moment. As the sun rose behind him and began to illuminate the Sierras’ peaks, he made one exposure. ‘Within seconds,’ he wrote, ‘the tonal variety that created the mood of the scene was destroyed by a flood of even sunlight.’ Winter Sunrise served as a kind of coda for Adams’ work at Manzanar and he chose it as the final illustration in Born Free and Equal.

Adams printed the mural offered here in 1967 for the Schwabacher Brokerage Company. It hung in the company’s Monterey office until its closure in 1969, when it was purchased by the current owner, Roger Poyner. A lawyer and photography enthusiast, Poyner served as Assistant City Manager for Monterey in the 1960s and knew Adams from the tight-knit Monterey/Carmel community. After taking possession of the mural, and hanging it in a place of honor in his law office, Poyner approached Adams for the documentation which now accompanies the print. 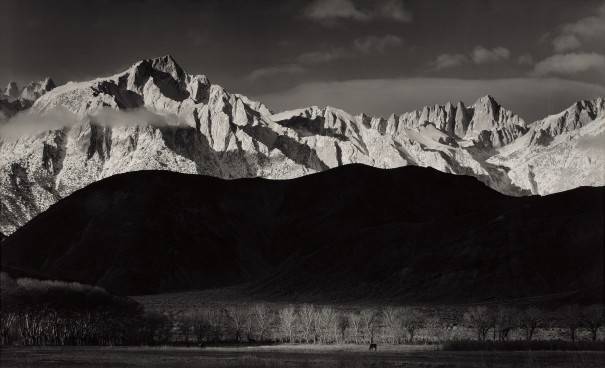