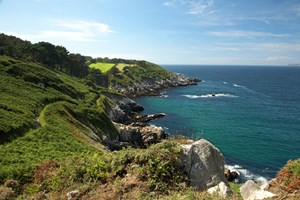 Iron figures would extend four miles out to sea to celebrate shared Celtic and neolithic heritage of UK and Brittany. The home planned for the new work is a peninsula and archipelago of small islands that jut into the Baie de Morlaix in Finistère, near to the site of an ancient burial cairn rediscovered during quarry work in 1955.

Stark on a hill over Gateshead, Sir Antony Gormley’s Angel of the North stands as a symbol of Britain’s northern identity. And across the country, on the Mersey estuary, the sculptor’s group of imposing solo figures at Corsby beach has become part of the landscape.

Now, on the eve of Britain’s potential departure from Europe, Gormley is planning a new and dramatic intervention on the beaches of northern France. He wants to erect a group of seven huge sculptures, made from iron slabs, on the coast of Brittany. They will look towards Britain, the lost island of Europe .

“I am very excited about this,” Gormley said in an interview with the broadcaster John Wilson for his arts podcast These Three. “After all, how do you understand yourself other than by your relations with your nearest neighbours?”

The project has yet to win final approval from the French authorities but the sculptor understands President Emmanuel Macron is supportive. Designed as a response to a vast neolithic grave site nearby at Barnenez, its modern resonance as a gesture of farewell to Britain after Brexit is is clear.

Gormley describes Brexit as “a stupid moment of collective fibrillation” and argues that such an imposed separation from the rest of Europe will be damaging and false. “We belong to Europe, geologically as much as anything else. We were only separated five thousand years ago. The whole idea that somehow we can go it alone by making greater relationships with the former Commonwealth and with our friends and cousins in America is just ridiculous,” he tells Wilson.

Gormley was first invited to France by the president of the Centre for National Monuments, Philippe Bélaval, and the visit they made together to Brittany inspired his latest artistic venture. In 2017 Bélaval tweeted enthusiastically about meeting Gormley to develop a secret grand projet.

The home planned for the new work is a peninsula and archipelago of small islands that jut into the Baie de Morlaix in Finistère, near to the site of an ancient burial cairn rediscovered during quarry work in 1955. The sculptor is soon to travel to Brittany to meet marine engineers and harbour authorities and to inspect tide levels at the sites. 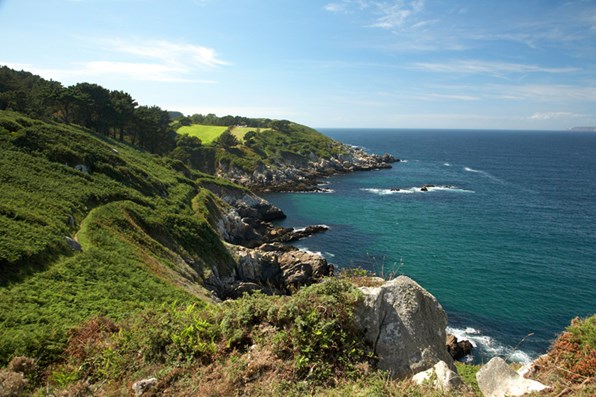 His giant figures, Gormley said, would be made with up to 30 iron slabs balanced on top of each other. “They are sort of massive houses of cards, but made out of blocks that do actually cohere,” he said. “They are an attempt to say something about the human condition – that we are all provisional. We stand up, but we are always in danger of falling over.”

The first would stand on the beach, the second on a promontory and the third on the first island, about three hundred metres out to sea. The entire project would reach out more than four miles (7km) into the sea. A similar sculptural form was used by Gormley on a beach at Kimmeridge bay in Dorset until waves felled it, but he has likened the shapes he hopes to install in Brittany to those now displayed in the first gallery of his major new show at the Royal Academy of Arts in London.

“These sculptures should never be completely underwater, unlike on Crosby beach. They should always be adequately visible and adequately attached to a rock or to an island, part of a known shipping hazard. But it may not happen. We may not get all the necessary permissions,” he explained to Wilson. 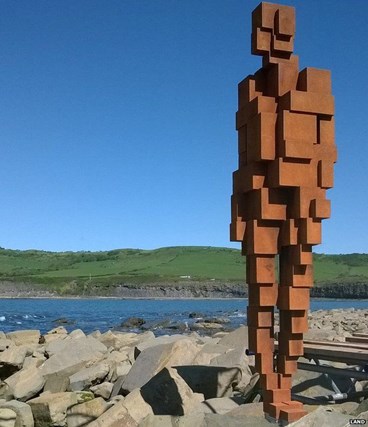 Gormley's sculpture on a beach at Kimmeridge bay in Dorset, image courtesy for BBC

The nearby cairn dates back to 4500BC and contains 11 burial chambers. Most of the passages and chambers are lined with large granite slabs, although some have beehive roofs.

In developing the Brittany project, which Gormley describes as “a wish”, he hopes to highlight the shared Celtic and neolithic histories of Britain and northern mainland Europe. The EU, he believes, was an attempt to heal the divisions of two world wars.

“We all know the EU is inefficient, but most human institutions are inefficient and that doesn’t mean we should not be part of their improvement,” he said. “I sincerely hope this moment of utter instability and lack of movement just disappears and we get on with making a sounder, safer, more just world. Because without the help of our neighbours we can’t do it.”