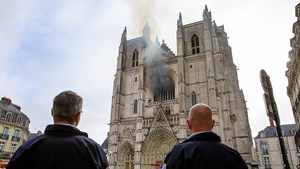 Contrary to the 850-year-old monument in the capital, which still had timber roof beams, the Cathedral of St. Peter and St Paul of Nantes had been renovated with concrete roof beams following a large fire in 1972 which had reduced the roof to ashes. The renovation was only completed in 2013.

More than 100 firefighters were deployed in the western French city of Nantes on Saturday morning to tackle a "violent blaze" at the cathedral.

"For the moment, the fire has been contained," General Laurent Ferlay, the head of the local fire service, told reporters at around 10:00 CEST.

An arson inquiry has been launched, the Nantes prosecutor said.

Footage released on social media earlier by the French Federation of Firefighters showed flames leaping inside the gothic monument as a large cloud of black smoke escaped to rise towards the sky.

Firefighters have called on people to stay away from the area.

Emergency services were alerted shortly before 07:45 CEST and some 104 firefighters were deployed to tackle the fire, Ferlay said. 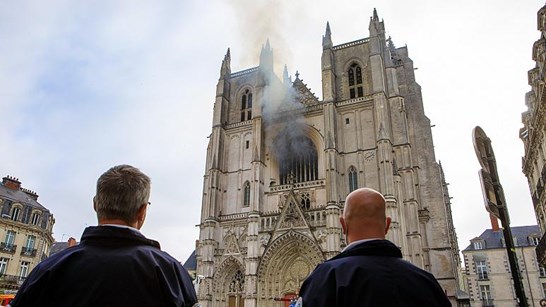 The "violent blaze" erupted "by the organ located behind the rose window", Ferlay explained.

"The roof has not been affected", he went on, adding: "the scenario is not comparable to Notre Dame".

This will be a relief for most French people still reeling from the devastating blaze 15 months earlier at Notre Dame cathedral in central Paris.

Contrary to the 850-year-old monument in the capital, which still had timber roof beams, the Cathedral of St. Peter and St Paul of Nantes had been renovated with concrete roof beams following a large fire in 1972 which had reduced the roof to ashes.

The renovation was only completed in 2013.

Firefighters are expected to remain on-site for the rest of the day and have begun to assess the damage.

Per Ferlay, "damage is concentrated on the great organ which seems to be completely destroyed". The platform on which it stood is also "unstable", he added.

The great organ has been in the cathedral since 1621. It originally had only 27 keys but subsequent restoration works increased the number to 74.

It had survived the French Revolution, WWII bombings and the devastating 1972 fire.

Authorities have launched an arson inquiry with Nantes prosecutor Pierre Sennes revealing that "three distinct fire points" had been found.

He stressed however that "there is no conclusion to be drawn now because we still have a lot of investigating to do which can bring new elements."

A fire expert from the technical and scientific police laboratory in Paris is to be dispatched to Nantes to help with the investigations.

Nantes Mayor Johanna Rolland praised the fire service for their reactivity and professionalism.

President Emmanuel Macron expressed his support to firefighters "who take great risk to save this gothic gem in the city of the Dukes".

Prime Minister Jean Castex said on Twitter that his thoughts are "with our firefighters courageously mobilised to contain the fire".

"To the people of Nantes, whose emotion I share, I want to express my solidarity", he also wrote.

Construction of the cathedral, which began in 1434, took more than 450 years. The gothic monument was listed in 1862 before it was even finished.