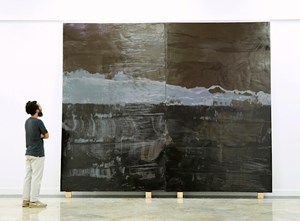 The work of José Yaque is life affirming. Standing in front of his huge canvas paintings we glimpse a vision of that infinite freedom, so rare and so precious, that allows an artist to create their work with an open heart and soul. Whatever José Yaque creates, the influence of nature always permeates his work. It manifests in a variety of forms, but there is a recurring theme around the interpretation of natural resources and phenomena. With artful mastery he manages to depict rocks, soil, water, seamlessly combining abstraction and figurative forms.

The work of José Yaque is life affirming. Standing in front of his huge canvas paintings we glimpse a vision of that infinite freedom, so rare and so precious, that allows an artist to create their work with an open heart and soul.

Whatever José Yaque creates, the influence of nature always permeates his work. It manifests in a variety of forms, but there is a recurring theme around the interpretation of natural resources and phenomena. With artful mastery he manages to depict rocks, soil, water, seamlessly combining abstraction and figurative forms. For José this is the indivisible state of nature. His installations raise questions about life and renewal, penance and healing, diversity and essence.

Yaque was born in Manzanillo, Cuba, in 1985. He now lives and works in La Habana. Artdependence Magazine had a chance to talk to him about the essence of his artwork, the role of nature, life’s myriad of challenges and intuition in art.

Artdependence Magazine: When I was researching your work I didn’t find any real biography for you. When did you realise that you wanted to become an artist? Was there a turning point you can think of? A moment that encouraged you to follow this path?

José Yaque: I think I was about 17 or 18 years old. Up until that moment nothing had really interested me. By chance I started to study at the art academy in Manzanillo. I had no pretension. At that time I was just learning that there was something called art. There was no specific point in my life when I decided to become ‘an artist’. Something was pushing or absorbing me into the art world at that time. In some ways you could say I became interested in art because I hadn’t been interested in anything else until that moment. That doesn’t feel strictly true though. The truth is that art is a dynamic and expanded territory from where one can move anywhere you want, or at least that’s how I perceive it. What seduces me most about art is the possibility of accessing freedom. I think I entered the art world because I saw that possibility. It’s impossible for any human to resist the desire to be free. The concept of freedom is what interests me. Art is the vehicle by which I access it. I don’t like labels. I don’t like labelling myself ‘an artist’. I prefer to think of myself as a human being who likes to create and who is interested in understanding and living that creation. Art is created by the free human and not ‘the artist’.

AD: Almost all of your three-dimensional works are very dynamic. They express life, movement and development. A few latest works which come to my mind are Agujero de gusano (Ladder, tools) and Interior con Huracan (Interior with a hurricane). Yet generally speaking, paintings are thought of as static.

JY: The works I have produced are simply linked to me and respond to different moments or stages of my past. I like diversity in everything, I love that the works are perceived in their most complex forms, that some works are observed as static and in others they are perceived as more dynamic. Although I am fascinated by diversity in the world, I’m also keen on understanding the unity that is present in the midst of that diversity. I’m referring to the essential essence. All humans appear to be different at different moments. This is fascinating to me. If you observe me when I am sleeping you would perceive that I was static, or lacking life - but I am only sleeping. If you saw me running you would perceive me as dynamic and full of life - but I am only running. It all depends on what we want to perceive. It’s so interesting to see that as humans we don’t even always perceive the same thing when presented with the same phenomenon.

AD: When examining your paintings it feels as if we are being invited to see something beyond, to look deeper at the strange landscape and the naturally occurring forms. What was the intention behind the paintings, if any?

JY: The paintings I’ve been working on over the last 3 years include a kind of paintwork that almost wants to talk about itself. It wants to investigate its own origins. As I conceive it, paint is, at is essence, colour. The colour is simply a perception that is caused by pigments that usually come from minerals that are found in nature, in the ground. I believe that the paintwork I’ve been doing is interested in the landscape that rests beneath our feet, the landscape that sleeps under the landscape and wants to talk about the horizons that rest under the horizon.

AD: Can your paintings be referred to as abstract, or is there a hidden figurative context you would like the viewer to see?

JY: I would like the paintings to be realistic because they investigate something concrete, but I know they’re perceived as abstract. I’m satisfied with the fact that they’re real. I think they invite us to perceive a hyperrealism that is found within a seemingly abstract reality that is beneath our feet, just like abstraction is present in the essence of all things that appear to be real.

AD: Nature seems to play a major role in your art. Many of your works are inseparable from natural materials and they raise a question around protecting nature. What does nature mean to you? Is it a source of inspiration, a means for creation, or something else?

AD: What has been your biggest challenge so far?

JY: The greatest challenge was, is and will be the necessity of being both the human being and the creative being.

AD: Do you think your work needs explaining?

JY: I believe that works should speak for themselves and be understood intuitively. When one tries to explain the works it simply adds confusion. In fact, I think the artist is the least likely person to explain his work. That might seem absurd, but I just don’t think an explanation is necessary. The works explain themselves and do what they have to do. I also recognize that for an artist, and I include myself, it’s very tempting to offer an explanation when you’re asked for one. But it’s a trap and a waste of time.

AD: Your work "Interior con Huracán" has a very strong impact on people. I would say that in a way, it warns us about something irrecoverable. What kind of a warning would you like people to hear/see?

JY: Interior con Huracán is a very interesting work for me. It was born spontaneously one day in the studio where I was working as a student of the Higher Institute of Art of Havana (ISA). It emerged abruptly from a constant experimentation, like most of the works that I have done. This has happened on three occasions now and the result is always very different but at the same time, identical. This is something that fascinates me. I think this work wants to talk about the power of the irrational and the role it plays in creation and nature. The irrational and the destructive as part of the creative process itself, and life in general.