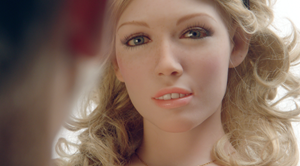 “I suppose the ideal thing would be if my dolls came to life, so they wouldn’t need to be dolls anymore” – with these words we enter the world of Everard Cunion, a RealDoll aficionado, and the protagonist of Sophie Dros’ film My Silicone Love. My Silicone Love will be screening during Amsterdam’s Neu Now festival, taking place September 14 – 18.

“I suppose the ideal thing would be if my dolls came to life, so they wouldn’t need to be dolls anymore” – with these words we enter the world of Everard Cunion, a RealDoll aficionado, and the protagonist of Sophie Dros’ film My Silicone Love.

Everard lives in the company of life-like dolls – he gives them names and personalities; they give him companionship, or some semblance of it. Sex may be the first thing that comes to mind when we think of rubber women, but Everard’s girls offer more than that: mainly, they offer safety, comfort, and a reprieve from loneliness. The most important woman in his life – his mother – passed away years ago, although Everard lives alongside her absence every day, keeping a room with her things intact, writing down memories of her so he won’t forget…

On the one hand, there is the surprising candor of the protagonist: Everard speaks openly about his personal blend of reality and fantasy. On the other hand, there is Sophie Dros’ ability to equally represent both. We know, and Everard knows, that the dolls are not real women – they don’t move, they don’t talk, they are only passively present. But, as the camera captures their silence at night, and the morning light falls over the impossibly symmetrical faces, we almost expect those glassy, vacant eyes to flicker, blink, and come to life.

With My Silicone Love, Sophie Dros masterfully enfolds discomfort with tenderness, pairing her perceptive camerawork with an accompanying score that touchingly conveys the longing, wistful desire of make-believe.

Artdependence Magazine: Your film My Silicone Love will be showing at Neu Now. When I saw the preview for your film, I recognized the main character from another documentary I saw years ago – Guys and Dolls. So, your subject was not really a stranger to being on camera…

Sophie Dros: Yes, he’s been on camera before.

Was he open to your project at first, or did you have to convince him to work, again, on a documentary?

I don’t think I had to convince him to work on the film, but I also think that the way in which I was planning to make the film was very different from…well, I don’t even want to call Guys and Dolls a documentary, because I don’t think it’s a proper documentary. I think it was more like an item... it was only about the phenomenon of guys who live with dolls.

Of course, there are many different styles of documentary film making. What would you say is your style?

I think for me, there are two things I’ve found to be important in my documentaries: one of them is the intention to show more than just a crazy phenomenon. So, for me, it’s really important to take an exotic topic, and then to look further than the exotic topic. To try to really get to know the person behind the topic.

The other thing that is important for me is to have some kind of style in my visuals. So, not just put the camera on your shoulder and run after your character. Instead, aim to make it more like art. With my camera man we always create a picture first and we tell each other: the camera cannot start recording before the picture is perfect.

In relation to that, I feel like in your style of working you have to be ready to be surprised, since you’re also investigating a phenomenon for yourself through your medium. So, how do you prepare to be prepared for anything?

For me, the story always starts with a pre-conceived judgment I have about someone, or something. When I first read about guys who are living with dolls I thought that’s the weirdest thing you could ever do, and I thought he must be crazy. That’s my starting point! From there, I would like to be surprised. To do that, I am going to look for something that I can recognize within myself. So, I’m going to start talking to him, and at one point… well, in this case, Everard told me about the loss of his mother, and that was something that I could relate to… I know how it feels to lose someone that is so close to you, and I know the feeling of wanting everything to stay the same. That’s something that I can understand. While I don’t understand why you want to live with dolls, now I do understand why you want to keep everything the same.

So, that’s how I ‘get surprised’. At the beginning I have my own judgments about someone, and then I really want to get to know the person better and try to find something that I can recognize. This is the road I want to take the viewer in, as well: from judgment to recognition.

Visually, though, it’s much more difficult to give yourself the opportunity to be surprised, because I also want to make a beautiful picture! But I think it has a lot to do with training: trying to look and imagine where things are going to happen, and to have the camera ready to capture that.

Would you say then, that either your art or art in general is about finding these points in common: a connection between the work and the person, and the subject of the work?

For me it is. I think that every film I make is art, and art is something that works well if it’s super personal. My films are never about me, but they are also about me. Otherwise, anyone could make them. And, for me, it’s really important to find something that I can recognize myself in - that it’s a personal story, as well.

So far, you seem really interested in gender and sexuality – not only with My Silicone Love, but also with Rubber Romance - another film, and What’s a Gender - a short…Are you looking to continue exploring these subjects?

Well, my new documentary is about gender as well. This feature is actually a longer version of What’s a Gender, with more characters - about 5 or 6 people who are completely gender fluid, meaning that they do not choose between being ‘man’ or ‘woman’ – they are somewhere in between.

I’m also working on a documentary about a female body builder. This is not really that sexual… but, I think the point in common between these projects is not about something sexual, but rather, it’s always something that I do not understand in the beginning. So, something that I find really fascinating, which makes me think wow, I could never imagine that you can live like that…

If we could just go back to My Silicone Love…well, I think it’s interesting when you consider the question of objectivity with these type of projects, and the effects of your involvement in the lives of your subjects. So, how do you feel about your ‘footprint’ as a documentary film maker? I mean, during filming you set up a date for Everard, and you got involved in his life, and then you left, and he’s a very lonely character…

I think this is one of the things that I struggle with the most. You do have some kind of responsibility for your characters, I think. In my case, with Everard, I found it really difficult to acknowledge that he started to grow on me as a person. So, of course, sometimes it’s really really difficult to see a scene unfold, and as a filmmaker you’re like wow this is a great scene for my movie! but as a person you think I’m going to interfere right now! I’m going to help him, because this is not good for his personal life. So, that’s a really thin line, and I don’t have a solution for it, but I always follow my intuition. I don’t want to harm anyone.

In my case, with Everard, I really wanted the best for him. So, when he went on the date, as a filmmaker I probably shouldn’t have talked to him about it beforehand, but as a friend I wanted him to succeed. So that’s why I did talk to him, and I said to him you’re a great person, even if she doesn’t want you, or, maybe you should ask her these type of questions, and I advised him, as a friend. In the end, as a documentary maker, it was better for me that he didn’t succeed, but as a friend I really wanted him to succeed.

Was Everard happy with the final result of the film?

Well, it’s funny because he really liked it…at least, he really liked the scenes with his dolls. He was like - “oh I really like how beautiful you’ve made my girls look!” - but for the rest, he didn’t care much. He was more like “I like it if you like it”, and, “yeah, it’s me” he said.

After all this, I’m wondering: when did you decide to work with film as your main medium?

At first I studied theater, but it was not for me. What I hated about theater was that you destroy everything once you’re finished. You work on something and then it’s gone. And what I really love about film is that it exists forever.

Personally, the reason why I chose to work with documentaries is that I think this is the best medium to learn, and to see, and feel, and hear things about other people or lifestyles that you would otherwise never get involved in. You know what I mean? Otherwise you would never know about a guy who lives with dolls. And now you can just watch and learn.

Given that you use your medium to explore and gain understanding on certain subjects, how do you feel about new developments in film technology that allow the viewer to immerse themselves even more into the scene - are you looking to maybe doing virtual reality at some point, or will you stick to the type of technique you are using now?