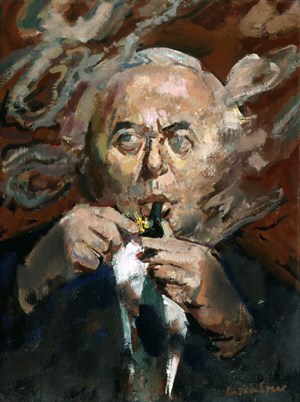 The 1970’s art world showed the continued influence of movements from the 1960’s such as Minimalism, Post-Minimalism and Performance Art. The mid-70’s brought the return of painting as a serious medium for avant-garde artists. Feminist Art, Land Art and Photorealism also became increasingly prevalent during this era, largely due to evolutions in the broader social and political climates.

The painting Harold Wilson is on display in the United Kingdom’s National Portrait Gallery. Wilson was known to be a gifted speaker and a skillful politician. In Spear's portrait, Wilson is portrayed with the air of hard-won informality that defined his public style. The sittings for the portrait took place in Downing Street. Wilson is shown with his trademark pipe. Spear described Wilson as 'a great actor, using a pipe as an extension of himself.'