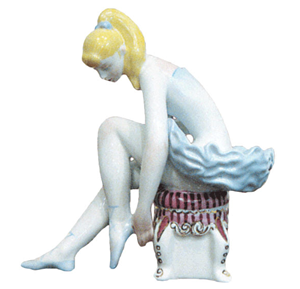 A piece of beautiful Soviet-era porcelain, depicting a ballerina adjusting her footwear whilst sitting on a stall, became one of the most talked-about pieces of Ukrainian art from the last decade in 2017.

A piece of beautiful Soviet-era porcelain, depicting a ballerina adjusting her footwear whilst sitting on a stall, became one of the most talked-about pieces of Ukrainian art from the last decade in 2017. Created by Ukrainian sculptor Oksana Zhnykrup, the piece is known as ‘Ballerina Lenochka’ and was created at The Kiev Experimental Ceramic-Art Factory.

Following several months of negotiations, Artdependence co-founder, Dirk Vanduffel, is happy to announce that the magazine was able to purchase the original piece from the Voloshyn Gallery of contemporary art in Kiev, who had procured the piece from a private collector in the city. Located in the cultural centre of Kiev in a historic building, the gallery promotes Ukrainian art on the international art scene and champions new and developing artists from the region.

‘Ballerina Lenochka’ was made famous worldwide this year after Jeff Koons created an enlarged copy of the work using inflatable material and installed it at Rockefeller Center in New York. Koon’s claimed that his sculpture sought to bring awareness to the International Center for Missing & Exploited Children. He named the piece ‘Seated Ballerina’. Koons did not credit Zhnykrup when he released the work, although her family later revealed that Koon’s representatives had bought the rights to the sculpture back in 2010.

Artdependence were one of the first to reveal the striking similarities between the two works, sparking an international debate around whether the work was in violation of copyright laws. The article was a very well read piece of 2017 and later on the story became one of the biggest art debates of the year.

Oksana Zhnykrup (1931-1993) was a renowned Ukrainian porcelain artist. In 1955-1987, she worked at the Kiev Experimental Ceramics and Design Plant, creating designs and decals for tableware. She created lyrical female figurines, sketching them from contemporary life and literature. Her works were exhibited at republican shows of decorative arts in the USSR, as well as at international art fairs in Leipzig, Chicago, Zagreb, Thessaloniki, Turkey, and Canada. Her works can now be seen at the National Museum of Ukrainian Folk and Decorative Art.