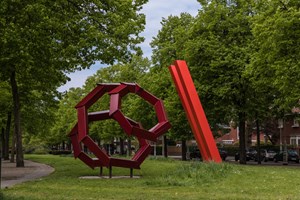 ARTZUID 2017 takes place 19 May-17 September. Fifty monumental abstract sculptures by Dutch artists are positioned in Berlage’s Art Deco district in Amsterdam South. The sculpture biennial follows the theme year ‘Mondriaan to Dutch Design – 100 Years of De Stijl’ and shows the influence of the Dutch art movement De Stijl (The Style) on sculpture. The artists are of different post war generations working in the abstract tradition, including André Volten, Joost Baljeu, Auke de Vries, Krijn de Koning, Esther Tielemans, David Jablonowski and Saskia Noor van Imhoff. This fifth edition of ARTZUID curator Rudi Fuchs, former director of the Stedelijk Museum Amsterdam, aims to position Dutch abstract sculptors internationally. In the Zuidas business district additional works of international artists will be on show, among which Cristóbal Gabarrón’s Enlightened Universe which was made on the occasion of the United Nations 70th anniversary in 2015.

Curator Rudi Fuchs about his choice: “Without a doubt the great new revelation of modern art was abstraction – particularly of the rectangular variety. This breakthrough paved the way for a new clarity as well as agility of design. The making of art changed profoundly as a result. Rectangular and other similar shapes are able to move freely, and can therefore be connected in many different ways. A figurative shape like, say, a tree stands rooted in the earth with its top in the air. By contrast a rectangle does not have a top and a bottom in the same way and is therefore able to move in free and unpredictable ways – just as a kite can make all kinds of swirls and swoops that would be impossible to imagine beforehand. It is precisely this freedom – freedom from formal rules and conventions – that came to typify the magical way in which modern art has evolved over the last century. Everything has been freed in an incredible way. It was its relentlessness and sharpness of formulation that gave abstract art its groundbreaking energy. In the Netherlands it was of course the art of Mondriaan that set all this in motion."