Banksy Confirms Nottingham Artwork of Hula-Hooping Girl is His 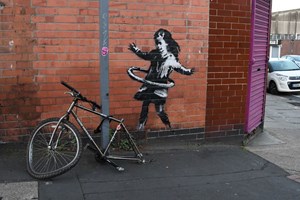 Banksy has confirmed that street art of a girl hula-hooping a bicycle tyre is his handiwork. The elusive graffiti artist confirmed on his Instagram page this morning (Saturday, October 17) that he is behind the new artwork in Nottingham.

Banksy has confirmed that street art of a girl hula-hooping a bicycle tyre is his handiwork.

The elusive graffiti artist confirmed on his Instagram page this morning (Saturday, October 17) that he is behind the new artwork in Nottingham. 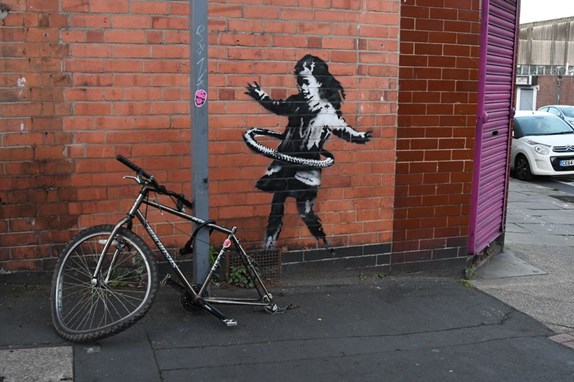 He wrote alongside the post: "Banksy's next job could be in Bicycle repair - he just doesn’t know it yet."

It appeared to be a play on words mocking the government's controversial Cyber First advert depicting a ballet dancer, which was widely criticised last week.

Banksy, who started as one of Bristol's DryBreadZ Crew in the early 1990s, left his latest creation in the Lenton area of the city.

It appeared on Thursday (October 15), on the wall of AVI Hair & Beauty salon along Rothesay Avenue, - Bristol post reports.

Nottingham City Council put a protective cover over it, and graffiti was scrawled on top of it.

Two women spent hours cleaning off the spray paint from the perspex, to uncover Banksy's work beneath.

The salon's owner Surinder Kaur told Nottinghamshire Live on Thursday: "I've never heard of Banksy before, so I did not know what to think.

"Now I know who he is, it is quite a shock, especially with all the crowds. It will be magic if it was done by him.

"I did not know about it until now. But the landlord says it has been there for two to three days."