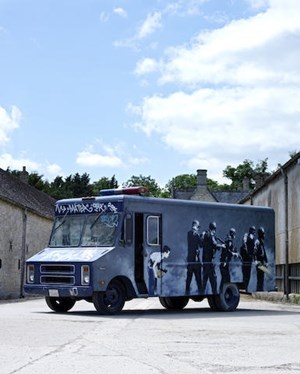 The van has remained shrouded in mystery since September 2006, and has since been verified by the Pest Control Office, Banksy's authorisation service. It was shown for the first - and only time - in an industrial warehouse in downtown Los Angeles, when the anonymous figure from Bristol, England, made his American debut with a solo exhibition. There was little pomp or fanfare, but the word spread like wildfire. Queues snaked their way around the block, and on the opening night Brad Pitt, Angelina Jolie, Cameron Diaz, Jude Law and Dennis Hopper were all on the guest list. The show was wacky and eccentric, with an Indian elephant, painted red and gold, lumbering around the gallery, and guests under strict instructions not to discuss the 'elephant in the room'.

But the true centerpiece was the SWAT van, spray painted in Banksy's irreverent, insouciant style, combining vicious black humor with his anti-establishment message. The painting depicts heavily armed Special Forces agents being hoodwinked by a small boy. Banksy, who has tussled with the police throughout his career, once said "My main problem with cops is that they do what they're told," he said. "They say 'Sorry mate, I'm just doing my job' all the f***king time." Banksy's characteristic stenciling technique, artfully employed on the SWAT van, was inspired by an incident: while the artist was hiding from the police under a rubbish lorry, he noticed the stenciled serial number. Stenciling has since allowed him to carry out complicated graffiti pieces extremely quickly, before he melts away into the night.

The controversial artist's SWAT van sent shockwaves throughout LA and the world in 2006. 'In the land of beautiful people, an artist without a face' was the New York Times headline following the exhibition. In the ensuing months and years he rocketed to international fame. His work regularly fetching six figures at auction, but he continues to work as a practising street artist.

Ralph Taylor, Senior Director of Bonhams Post-War and Contemporary Art department, said of the SWAT Van, 'All of Banksy is on show here: his bravado, his imagination, his technical prowess, his confidence and his willingness to put his head above the parapet and use truth as a weapon.'