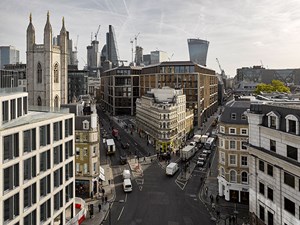 The 2018 RIBA Stirling Prize judges were unanimous in their decision to award Bloomberg the prestigious prize describing it as a “once-in-a-generation project”. RIBA President, Ben Derbyshire added that it is a “monumental achievement”.

The 2018 RIBA Stirling Prize judges were unanimous in their decision to award Bloomberg the prestigious prize describing it as a “once-in-a-generation project”. RIBA President, Ben Derbyshire added that it is a “monumental achievement”. 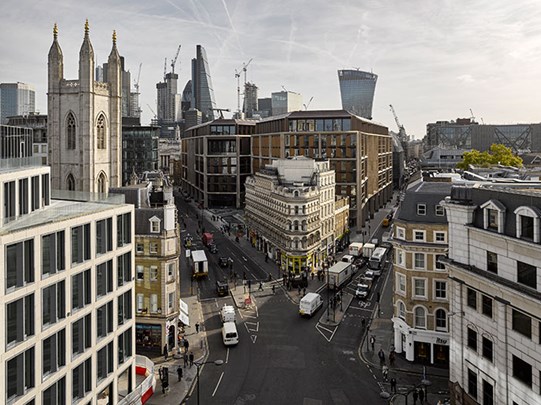 Thought to be the largest stone building in the City of London since St Paul’s Cathedral (c. 1675), Bloomberg is a state-of-the-art project which has pushed the boundaries of research and innovation in architecture.

Years of systematic research led Foster + Partners to radically re-think the standard ‘office-in-the-city’ format and develop ground-breaking systems to make it the most sustainable in the world. Ben Derbyshire says that it has “not just raised the bar for office design and city planning, but smashed the ceiling.” 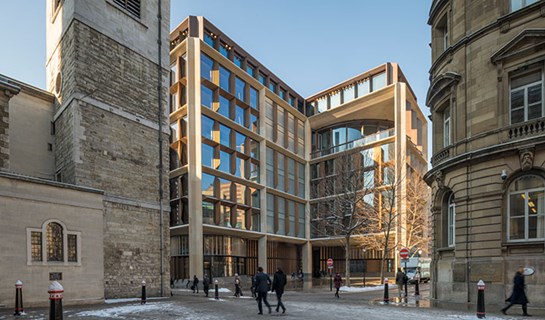 At 1.1 million square feet, Bloomberg occupies a whole block in the City and currently provides a workplace for 4,000 staff. Bloomberg comprises two buildings, connected by a bridge, which sit either side of newly created public arcade. The arcade reinstates an ancient Roman road called Watling Street, which originally ran through the site.

Even though Foster + Partners originally obtained permission to design a building over double the height, Bloomberg sits at a much more appropriate scale - at a modest ten stories - and seeks to create a dialogue with the City that surrounds it. 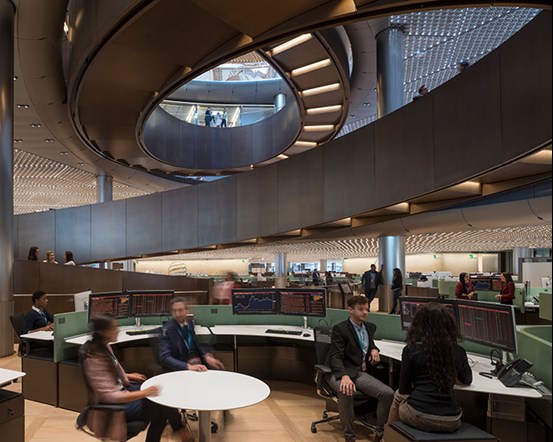 This complex scheme also incorporates new access to Bank Underground station, cafes and restaurants, and a museum displaying the Roman Temple of Mithras, which was discovered on the site sixty years ago.

It’s a building of contrasts: restrained, sensitive and elegant from the outside with a dynamic, open-plan interior to encourage and facilitate the global financial information company’s collaborative way of working.

Unlike most offices, instead of a large central core formed of lifts and staircases, Bloomberg’s services are pushed to the edge and the people form the core of the building. 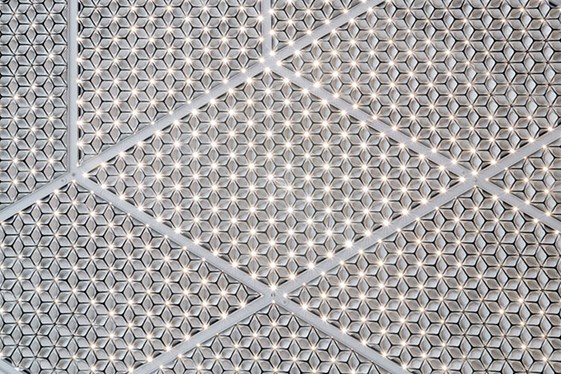 Everyone passes through the reception lobby before being drawn into the ‘Vortex’ – a dramatic double-height space created by three curved timber shells. From here, high-speed lifts carry you directly to the sixth floor ‘Pantry’ – a large concourse and café space with views across the City. A 210m high bronze ‘ramp’ that is wide enough for impromptu conversations without impeding the flow of people, winds down and links the office floors below. Workspaces are clustered in the wide open-plan floors which are filled with pioneering new technologies including multi-function ceilings fitted with 2.5 million polished aluminium ‘petals’ to regulate acoustics, temperature and light.

Bloomberg has been credited as the most sustainable office building in the world. Research and technological experimentation led Foster + Partners to develop pioneering power, lighting, water and ventilation systems to utilise waste products, respond to the building’s external environment and adapt to its occupancy patterns. These systems will benefit the future office design for years to come.

This ground-breaking project demonstrates what is possible through close collaboration between highly-skilled, imaginative architects and a sophisticated, civic-minded client. Bloomberg is an astounding commitment to quality architecture.