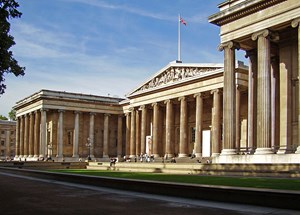 A group of 8 historic objects from Iraq seized in a Metropolitan Police raid are now going back to Iraq, thanks to the British Museum.

A group of 8 historic objects from Iraq seized in a Metropolitan Police raid are now going back to Iraq, thanks to the British Museum. The items were suspected to be looted and seized from a now defunct London dealer in a Metropolitan Police operation on 2 May 2003. The dealer failed to supply proof of ownership, subsequently ceased trading and the objects passed to the Crown and then to the British Museum for analysis this year. The objects were identified by Museum experts as being from Iraq, specifically from the site of Tello in Southern Iraq, where the British Museum’s Iraq Emergency Heritage Management Training Scheme has been conducting archaeological excavations since 2016.

These objects were successfully identified as being from the site at Tello thanks to the British Museum’s Iraq Scheme, as experts were able to link up investigations into suspected areas of looting in Tello with the objects brought to the Museum for identification in 2018. Three of the objects carry Sumerian inscriptions in cuneiform script which identify their origin as the Eninnu temple at ancient Girsu (modern Tello) in southern Iraq. This temple was sacred to the god’s patron deity Ningirsu and is located in the area of Tello known to modern scholarship as Tell A and where current excavations are revealing the plan and extent of this important complex. The other items are also identical to objects known from excavations at Tello and most likely also originate from the same site.

In 2015, a potential crime scene was recorded as part of an initial survey of the site at Tello, and in more detail in 2016 as part of the Iraq Scheme and shown to consist of dozens of shallow pits, usually less than a metre deep and up to three metres across. These are concentrated in certain areas of the site: the largest number are on the northern side in the Sacred City, followed by an area known as Mound of the Tablets where many cuneiform objects had been found previously. The site of Tello then remained untouched until looting began at the beginning of 2003 according to information from the State Board of Antiquities & Heritage authorities (Nasiriyah), Thi Qar archaeological police and local tribesmen.

These 8 objects were removed from the site in 2003. This activity would have been clandestine, probably carried out at night and possibly conducted by a small number of individuals over a limited period of time as the scale is not as extensive or systematic as witnessed at other sites in southern Iraq. This activity corresponds to a phase of widespread looting of particular archaeological sites in southern Iraq between the 1990s and 2003/04 and analysis of the art market shows that similar inscribed cones were offered for sale during the same period. Since then looting was brought to an end with the establishment of the archaeological police of the State Board of Antiquities and Heritage in Iraq, and the site of Tello is now protected once again. Press release British Museum’s Iraq Scheme helps reunite objects from ancient site of Tello On Friday 10 August, these objects were formally handed over to the Iraqi Embassy in a small ceremony held at the British Museum. From here they will return to Iraq.