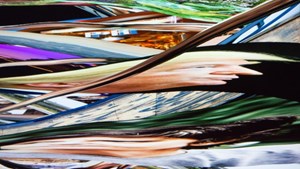 Media artist Casey Reas’ latest exhibition Linear Perspective at Charlie James Gallery in Los Angeles’ Chinatown is presented in a completely blacked out space reminiscent of the void of our societal collective consciousness. Upon entering, one is immediately exposed to the wall-scale title piece, an unfolding electronic painting projected onto a black wall that slowly emerges in digital brushstrokes of surreally flattened and warped images.

Media artist Casey Reas’ latest exhibition Linear Perspective at Charlie James Gallery in Los Angeles’ Chinatown is presented in a completely blacked out space reminiscent of the void of our societal collective consciousness. Upon entering, one is immediately exposed to the wall-scale title piece, an unfolding electronic painting projected onto a black wall that slowly emerges in digital brushstrokes of surreally flattened and warped images. Each image represents a single front page of The New York Times, above the fold section, starting from January 1, 2015 to the current day, non-recognizable in its warp, appearing from a single point and moving horizontally across the plane. The building up of these visuals creates a constantly changing picture of our mainstream news environment obliterated into color, shape and form.

The seven other works in the show, revealed on digital screens, also reflect the artist’s engagement with mass media. Some examples include AYFABTU (Followers), in which we see a shifting pixelated portrait of the artist’s Twitter followers. KTTV (August 2015) fragments a month’s worth of prime time news into oblivion alongside a soundtrack that hints at the sensationalism of the subject matter. https://www.youtube.com/results?search_query=adventuretime (30 July 2015) translates YouTube searches into an amalgam of blips, dots and dashes rendering content meaningless. 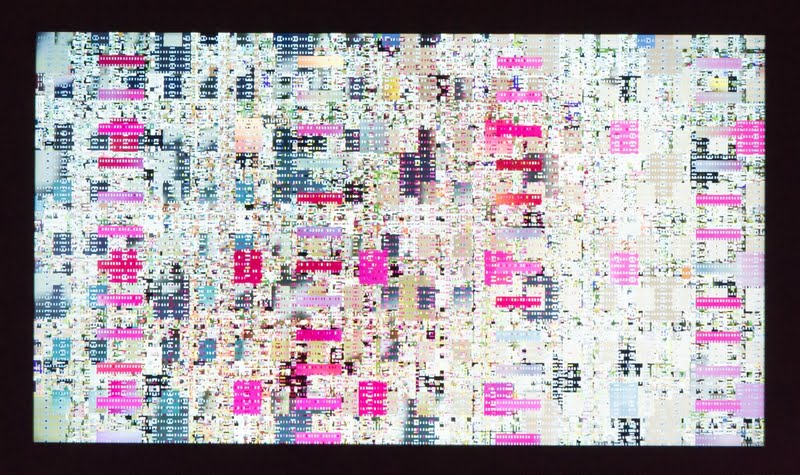 To make his art, Reas, a professor at the University of California, Los Angeles, creates custom software fed with distinctive algorithms to manipulate material gathered from newspapers, social media profiles, broadcast television and YouTube searches.  What results are stunning, ever-shifting glimpses into his personal confrontations with media. The two pieces in an isolated back room hang accompanied by headphones and a chair, upon which one may sit, to become further enveloped into the work’s eerie world.

I recently spent some time with Reas to delve further into his process.

Artdependence Magazine: By transforming streams of the constant barrage of information that surrounds us into beautiful extractive works of art, are you attempting to turn off the noise, add to it, obliterate it, and/or elevate it?  What was your original desire when you began to work in this direction?

Casey Reas: This work started with television signals. I was recording hours of HD video over the air and selecting 30 minute unedited segments as the source material. These cut-up collages started with a body of work called CENTURY. I was directly referencing lines of works from the last century, in this case Georges Braque to Kurt Schwitters to Nam June Paik. It was about the dominant mass media of the twentieth century colliding with (or being eaten by) the dominant media of the now, computers and the Internet. It was about the signals moving from analog to digital and most importantly, how that shift has changed the medium and how we experience it. 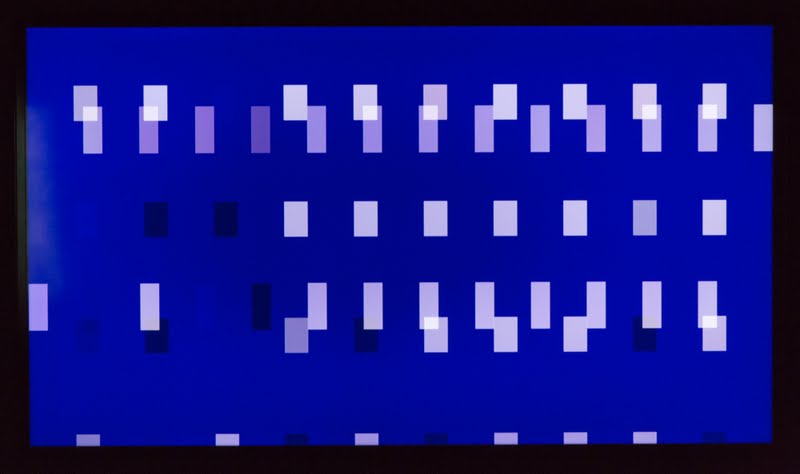 AD: I am reminded of ancient alchemical processes when I view your screens—the act of turning one substance into another only using technological algorithm instead of fire. What are you burning and what do you hope to gain in the process?

CR: For each group of work it's different. For the television work, it's amplification to search for the essence of the source. For the photography work, it's distortion to break down the fantasy of objectivity and to remove editorial hierarchy. For the social media profile photos, it's fracturing the individual to construct a mob.

AD: Give me concrete examples. What was behind the desire to create the perpetual portraiture in your Twitter followers piece?

CR: The AYFABTU (Followers) work is one within a series of three and each explores different social media platforms. The three, in order of creation, are AYFABTU (Patrons), AYFABTU (Followers), and the unfinished AYFABTU (Friends). They are reactions to, in order, Kickstarter, Twitter, and Facebook. Like many people at the moment, I'm thinking about how individuals present themselves online in different contexts. I'm specifically engaged with portraiture on social media platforms. I'm also curious about how I relate to these other people. Some are intimate friends, others are acquaintances, and others are complete strangers that share only this online media connection. I'm compressing unique identities into a less differentiated mass. I think of these as self-portraits.

AD: What about your New York Times above-the-fold piece?

CR: Linear Perspective broadcasts each image from a single point from left to right. Each image moves from an abstraction on the left to degrees of legibility as it moves right on the wall. It's a part of the history of ideas from the invention to perspective, the shift to an objective and mathematical way of representing space, to the camera obscura to the film camera. The images are among those that are most relevant and consequential to our society, the primary editorial decisions on the front page of The New York Times. They dictate what is important, what I should be thinking about, and how I should be thinking about it. These images frame our worldview – how we think about our society and ourselves. I am pushing these images back into a state of ambiguity and subjectivity where I am more in control of what I read and how I perceive.

AD: What about the You Tube and television news station pieces with sound?

CR: KTTV (August 2015) and https://www.youtube.com/results?search_query=adventuretime (30 July 2015) are similar works. They are in the tradition of Burroughs and Cage, Paik and Sharits, but they are continuous and nonlinear in perpetuity. They fragment the mass media of the moment, television and television on the Internet.

AD: Your medium is software and your material is code – when did you first decide upon this vehicle for your expression, how did it begin and how has it evolved over the years as you have realized your voice as an artist?

CR: I've been writing about software as my medium for years and I continued that into the idea of the software studio as a site for working. It was a comparison to photography, once the domain of technical wonks and now a recognized medium within the arts.

I'm shifting away from “software” to a more general description of the work as “conditional media”. Conditional media is more of an approach to thinking about work that is shared by choreographers, composers, and visual artists rather than specific to one medium or technique. It's about the work changing and unfolding according to a set of rules or systems. The Open Work by Umberto Eco was an influential text that shifted my thinking about this around twelve years ago.

I started working with software because it was the only way that I could realize my ideas. It augmented my ability to think. Before I was able to write my own code, I wasn't able to find my way. Now after fifteen years, I can think outside of that technical frame and more is possible. 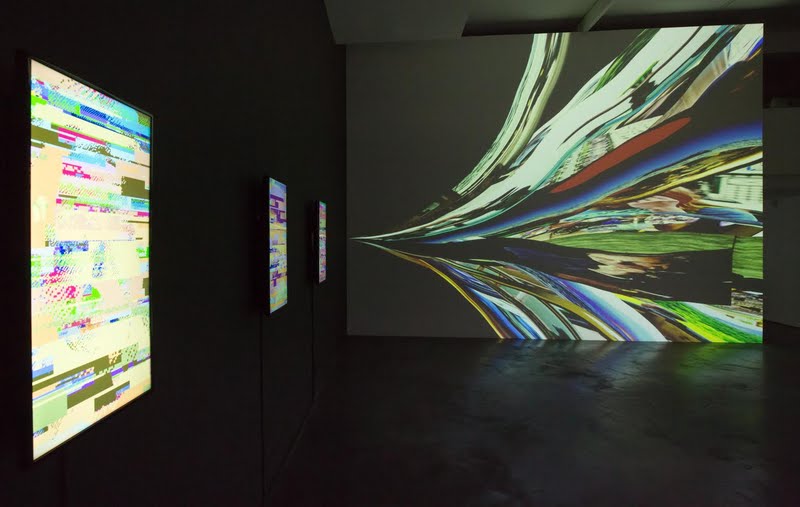 AD: Many of your pieces are simply visual and transfixing as such in their constantly transitioning movement – what compelled you to add sound to certain pieces?

CR: I'm curious about what compelled me to exclude sound for such a long time in this series of work. These are my first works to have sound and working with only image was a hard habit to break after fifteen years. I'm thrilled to show these works for the first time. Because the source material is audiovisual, I feel the work should be as well. The image and sound are both distorted with similar systems within the separate domains. I think the addition of sound augments the immersion with the work and focuses attention.

AD: While listening to those particular pieces while being fed the visuals I had the same discombobulated sense I get when I watch movies like 2001: Space Odyssey where man is adrift and alone – the only sound being an echoing sort of silence punctuated by primal beats like breathing, the interior of the womb, Doppler Effect-like trails of noise that accompany one’s life then fade away into oblivion. Man floating in the audio chamber of the communal unconsciousness. As the artist, what do you feel when you listen to the works that have sound included and is that in tune with or a departure from the original intent of the piece for you?

CR: I love the comparison. The isolation and anxiety in Kubrick's films from that era, particularly 2001, are relevant. Sound is crucial. The bold passages of Ligeti's music in 2001 are one of the most frightening aspects of the film – it's entirely haunting. For both of my audio works in the show, the proximity of the chair to the screen and the decision to use headphones are important – both enhance the immersion and the isolation. Also in both, narrative and representational images are entirely obscured to focus on other aspects of the signal. 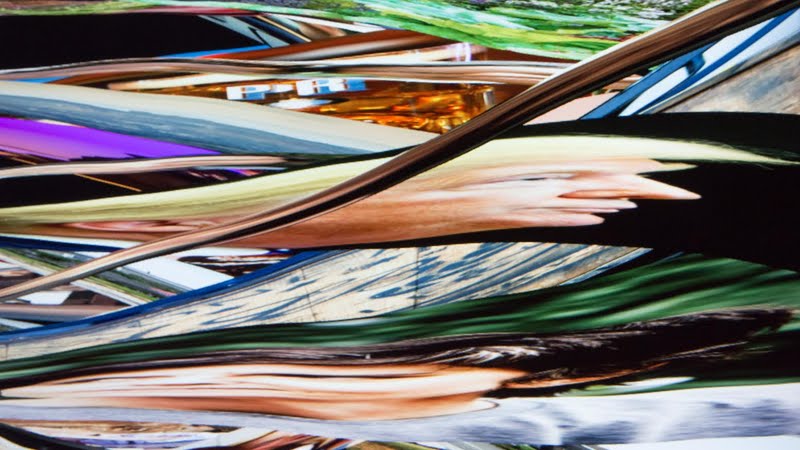 AD: It is written about these works that you are confronting the media that consistently swirls around us? What exactly are you confronting? What do you hope to extrude from this interaction?

CR: I make this work to force myself to scrutinize the media that I'm engaged in and to evaluate my relationship to it. The works don't have a goal or a clarified origin. I make the work to be more aware and to construct new experiences and ways of thinking.

By Kimberly Nichols
Kimberly Nichols is an artist, writer, and social anthropologist in Los Angeles, California. Her conceptual works, literary fiction and creative nonfiction have been exhibited and published internationally. She is the author of the critically acclaimed collection of short stories Mad Anatomy (Del Sol Press, 2005) and is currently writing a second book.