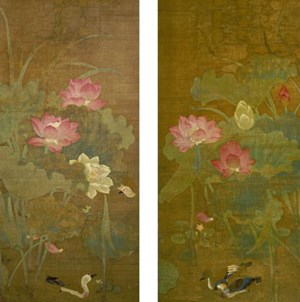 The centerpiece of the exhibition is a wall painting depicting the Seated Bodhisattva Avalokitesvara (Guanyin) that once decorated a temple hall in northern China during the Five Dynasties period. Also on view are four hanging scrolls, including a pair illustrated with lotuses, and a painted wooden sculpture of a seated arhat that has never been exhibited at the Museum.

In the centuries after Buddhism was introduced to China in the early part of the Han dynasty (AD 25–220), the style of Chinese Buddhist art developed its own unique characteristics. Spanning nearly 600 years—from the Five Dynasties (907–960) to the early part of the Ming Dynasty (1368–1644)—Chinese Buddhist Art, 10th–15th Centuries explores this evolution with rarely exhibited works from the Museum’s collection that depict significant Buddhist subjects, including bodhisattvas, arhats, and lotuses.

The centerpiece of the exhibition is a wall painting depicting the Seated Bodhisattva Avalokitesvara (Guanyin) that once decorated a temple hall in northern China during the Five Dynasties period. One of the oldest and largest surviving works of its kind, the wall painting was given to the Museum by C.T. Loo, the preeminent dealer of Chinese art and artifacts during the first half of the 20th century. Also on view are four hanging scrolls, including a pair illustrated with lotuses, and a painted wooden sculpture of a seated arhat that has never been exhibited at the Museum. 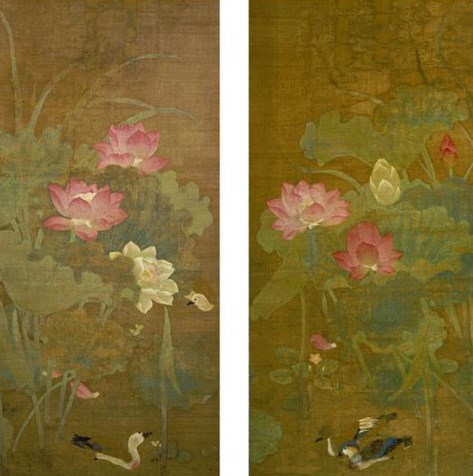 The mated pairs of waterfowl in this matched pair of paintings of lotus are symbols of marital fidelity and happiness. The promise and richness of life are represented as flower buds and full blossoms rendered in minute and sensitive lines of white and pink against large lotus leaves in contrasting malachite green. These hanging scrolls were created by the southern Piling studios which were famous for their decorative paintings of birds and flowers, specializing in works with themes of celebration and harmony. In China, the lotus evokes memories of hot, languid summers filled with the flower's lovely fragrance. Matching lotus scrolls were presented to newlyweds in hopes of a productive family life, for each flower hides a pod filled with sweet seeds, symbolizing abundance and many children to the loving couple.

This fragment of a mural painting depicts one of the many manifestations of the Bodhisattva Avalokiteśvara, or Guanyin in Chinese. The deity is shown seated in the cross-legged lotus position for the purpose of meditation. Behind him is a circular halo indicating his divine status. The Principal identifying attribute of this popular bodhisattva of mercy and compassion is the small image of the Amitābha Buddha, the Buddha of Infinite Light, set into the front of his elaborate crown. Theologically, bodhisattvas are usually gendered as male, thus the face of this bodhisattva is shown with a wispy mustache.

In addition to the 33 manifestations of the Bodhisattva Avalokiteśvara, the deity may also be represented in another six forms that correspond to this manifestations to protect the six realms of reincarnation within the Esoteric or Tantric branch of Buddhismean. These are the Divine Guanyin for being in hell; the Thousand-armed Guanyin for hungry ghosts; the Horse-headed Guanyin for animals; the Eleven-headed Guanyin for bellicose demons; the Pure Guanyin for humans; and the Wish-fulfilling Wheel Guanyin for heavenly beings. This painting most likely represents the root form of the Bodhisattva Avalokiteśvara (in Chinese, Sheng Guanyin, meaning the "Divine Guanyin"). If this is the case, then the proper right hand (on the left side), whose painted traces have been lost, would have held a lotus flower as its main attribute.