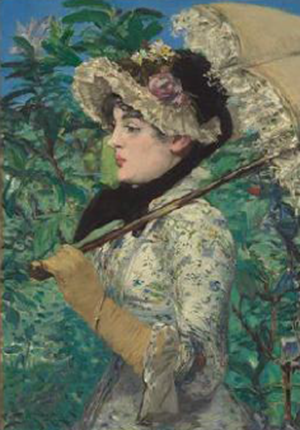 Christie’s is delighted to confirm that the J. Paul Getty Museum in Los Angeles is the new owner of Edouard Manet’s Le Printemps (Springtime), sold at Christie’s New York Wednesday night for $65,125,000 (£41,028,750 / €52,100,000) after an epic bidding battle between private and institutional clients from the Americas, Europe, and Asia. The price set a new auction record for any work by Manet, nearly doubling the artist’s previous auction record of US$33.3 million, set in 2010.

Of the 30 paintings that Manet exhibited at the Paris Salon of 1882 over the course of his lifetime, Le Printemps was the last remaining in private hands. Proceeds from its sale will benefit a private American foundation supporting environmental, public health and other charitable causes.

Impressionist and Cubist works proved particularly appealing to clients this season, with 100% of the sale’s Impressionist and Cubist offerings sold -- an indication of heightened interest in this movement as well as the great rarity of the works offered. The Cubist selection was led by a collection of three works from the Melamed Family Collection, which totaled $10,151,000, including:

o GINO SEVERINI, Etude pour Autoportrait au canotier, charcoal, pastel and white and blue chalk on buff paper, 1912-1913, price realized: $4,757,000 – a new auction record for a work by the artist in this medium.