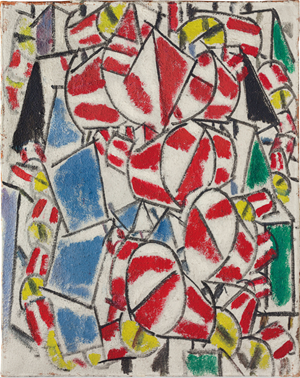 Offered for the first time at auction, a groundbreaking painting of the early 20th century that marks a departure from the purely figurative and the advance towards abstract art.

Offered for the first time at auction, a groundbreaking painting of the early 20th century that marks a departure from the purely figurative and the advance towards abstract art.

Painted by Fernand Léger in 1913, Contraste de formes  belongs to a series of paintings that changed for ever the way we look at art. Across the course of just a few months, in a sequence of some 14 canvases, Léger advanced beyond Cubism into a visual language that abandoned the representational concerns of his contemporaries, Picasso and Braque. Instead, his only subject was pure, abstract shapes and colours, hinged on a network of forceful lines.

The Contrastes de formes  have long been considered cornerstones of important collections of modern art, and thus nearly all examples from the series are today housed in major institutions. This exquisite picture, offered in New York on 13 November, comes from the property of the Anna-Maria and Stephen Kellen Foundation, and proceeds from its sale will go towards the foundation’s philanthropic mission.

Léger wished to replace the illusory dynamism of Italian Futurism, with its use of modern, cosmopolitan subjects treated in motion, with a true pictorial dynamism. He also sought to move beyond the influence of Cézanne, whose work had made an overwhelming impression on him when he saw the master’s memorial retrospective at the 1907 Salon d’Automne. Léger felt that the accelerating pulse of modern living required a more radical approach in order to reflect its new sensations.

La femme en bleu, painted in mid-1912 and shown at the Salon d’Automne that year, was his answer to these issues. Léger took a stable subject — as in a Cézanne portrait — and invested it with extreme formal contrasts: flatly coloured planes opposing modelled tubular, conical and cylindrical forms.

He was by now on the verge of pure painting — only vestiges of the subject remained — and in early 1913 he took the plunge with his Contrastes de formes, the series that occupied him for the remainder of the year and into 1914. Léger fabricated a tumbling surface in which shapes simultaneously appear to project out of the picture plane or recede into it, thereby suggesting volume. All the component lines, forms and colours are actively engaged as they play off each other to create a jolting, rhythmic composition.