Curator Stefano Collicelli Cagol asks: What is Experimental? At Artissima 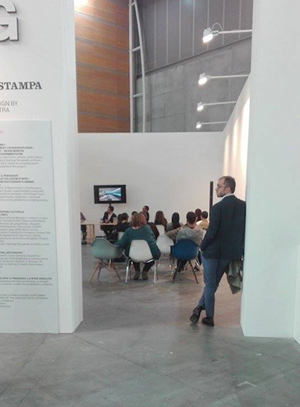 Art fairs are unifying: they bring together artworks, and they bring together people. The benefits of attending an art fair, therefore, extend to a social and educational experience. Artissima, in particular, places a lot of emphasis on the connectivity of art world participants and art lovers. Ever in search for innovative initiatives, and in the interest of asking the important questions, Artissima this year included a series of talks, titled What is Experimental. These talks are being led by Stefano Collicelli Cagol, currently curator for Norway’s Trondheim kunstmuseum.

Art fairs are unifying: they bring together artworks, and they bring together people. The benefits of attending an art fair, therefore, extend to a social and educational experience. Artissima, in particular, places a lot of emphasis on the connectivity of art world participants and art lovers. A successful program over the years has been the Walkie Talkies – where curators and collectors lead groups of interested individuals over the fair grounds, discussing and discovering artworks, artists, and specific themes. Ever in search for innovative initiatives, and in the interest of asking the important questions, Artissima this year included a series of talks, titled What is Experimental. These talks are being led by Stefano Collicelli Cagol, currently curator for Norway’s Trondheim kunstmuseum. We reached out to Stefano to find out more about this project, and his thoughts on experimental practices.

Artdependence Magazine: This won’t be your first time at Artissima – last year you acted as curator for In Mostra, the exhibition within the fair. This year, you will be curating a series of talks, titled What is Experimental. What is it about Artissima that keeps you returning?

Stefano Collicelli Cagol: Artissima is a fair with a strong curatorial presence, both in its structure – with curated sections such as Present Future, Back to the Future and Per4m – and in the public that is able to attract, as many international curators flock to Torino during these days. This aspect of Artissima has always attracted me as, on the one hand, it provides a platform for information exchanges and discussions with peers, while on the other hand it ensures a great quality in the projects presented by the galleries in the curated sections of the fair, further strengthening the achievements of the selection committee.

AD: What is Experimental will bring together curators from non-profit or institutional spaces in debate. As a curator yourself, what would you say are the ideal breeding grounds, so to speak, to engage in experimental practices?

SCC: What is Experimental sees in conversations curators from different backgrounds, living in different parts of the worlds. In the first talk, Sorhab Mohabbi, Associate Curator at REDCAT, Los Angeles will explore the transformation of the institutional and non-institutional landscape in his city in conversation with Davide Quadrio, who will present what is happening in the Shanghai’s institutional context, where he works as a producer and curator for the Aurora Museum.

In the second talk, Tobi Maier, based in San Paolo introduces the practice of curators organizing exhibitions in their home, while Natalia Sielewicz, curatorof the Modern Art Museum in Warsaw reflects on post-internet art and its impact on experimenting with new formats for the production and circulation of art. In these ways, the talks aim to show a range of breeding grounds to engage with experimental practices, highlighting the willingness of different subjects to put into question the conditions in which a given institutional landscape is operating.

If a system provides you rules and limitations, as a curator I believe our role is to propose alternative ways of doing things to provide such spaces for artists and discourses. Art is at the core of our commitment, but at the same time there is a constant need of making sense of the context in which one is living. Having an experimental attitude towards a context in which we operate, for me, is the essence of a curatorial practice - something very different from the role both of an art historian and of a museum curator.

AD: To talk about experimentation is to talk about trial and error. In this process, failure is inevitable. Yet, failure has long been considered a taboo subject. But, it is becoming more prevalent to talk about failure as part of the learning process (it’s been particularly embraced by the startup culture). Do you think the art world openly discusses failure? What form does this conversation take?

SCC: I think there are many art worlds so I am not sure how to answer this question. Each context seems to abide to its own rules, certainly among the most established institutions I have the feeling that failure tends to be limited to the minimum and it is not really addressed, at least publicly. The tendency to promote solo shows that we are witnessing in the last five years seems somehow to confirm this to me. A different case can be made for more temporary spaces or projects that are more interested in embracing the theme of failure. In this case, it can take the form of a work of art or of a series of discussions, educational projects or institutions set up with the intent to last only for a particular period of time.

AD: Of the shows you’ve seen recently, which would you say has been the most experimental?

SCC: I loved the show that Francesco Barocco and Giulio Paolini presented at Studio Salvo of Norma Mangione Gallery in Turin. The idea of the show came into being after Paolini experimented for the first time the making of an etching under the guidance of younger artist Barocco. Happy with the result they decided at first to do a public presentation of the editions they produced during the workshop but then the idea expanded into a real exhibition with one room presenting the editions alongside other works from both artists, while other two rooms of the Studio Salvo devoted each one to one of the artists’ works. I found the show thoughtful, beautiful, and touching, as it was exhibiting the result of an artist challenging himself by working for the first time with a new medium under the guidance of a younger colleague.

In term of exhibition-making, probably the most inspiring among the recent ones I visited was Making and Unmaking at the Camden Art Centre, London curated by Duro Olowu who combined works of artists from different generations and contexts alongside textiles and objects not necessarily belonging, strictly speaking, to the art world. Finally, in term of initiatives, I loved Home Works Forum 7 organised by Ashkal Alwan in Beirut, one of the most vibrant events I have been in the last year, where exhibitions, performances, discussions, workshops were happening within a powerful and friendly educational context.

AD: Of the shows you’ve curated, which would you say has been the most experimental?

SCC: I loved to experiment with the catalogue of the exhibition Seven Little Mistakes, which I curated at Museo Marino Marini, Firenze in 2010, where I produced a publication in the form of a series of cards with images of the exhibitions, texts on the invited artists and ‘curatorial cues’ (as would say curator Zasha Colah) around the concept of the exhibition. In this way, the readers could reshuffle the publication recreating the exhibition according to their interests.

But, as an exhibition, I would say the project More on This Story Soon…. It was the result of a residency at LUX Artists’ Moving Images and Fieldbrodcast, London I did in 2014. Fieldbroadcast is an application for smartphone, pad and laptop that interrupts your activities by sending unannounced videos on your device, while LUX is an institution with an incredible film and video archive. Every day, I combined one of the videos from the archive with a news of the day, using the app as a sort of apparatus to breaking the news. I was posting links to a certain news and selecting one video from the archive that could help to understand the event from another temporal and linguistic perspective. It was a way to reactivate the archive, to respond through art to the understanding of the present and to rethink today’s broadcasting of the news, how it is changing with the new digital technologies and non-professionalists that are involved in the making of videos in areas where journalists either are not allowed to enter or are not physically there at the moment an event occurs. Because Fieldbroadcast does not have an archive or podcasts on purpose, there is no documentation about the project.