Da Vinci's Salvator Mundi Will Be Exhibited from September 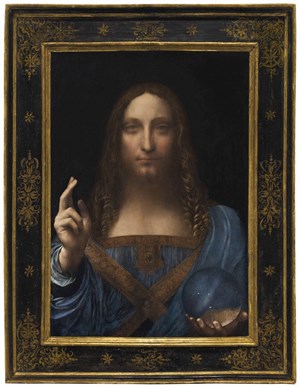 Salvator Mundi by Leonardo da Vinci will be unveiled to the public at Louvre Abu Dhabi on September 18, 2018.

Salvator Mundi by Leonardo da Vinci will be unveiled to the public at Louvre Abu Dhabi on September 18, 2018. Acquired by the Department of Culture and Tourism – Abu Dhabi in 2017, Salvator Mundi is one of fewer than 20 known surviving paintings by the Italian Renaissance master and is his final work to enter into a cultural institution’s collection.

Salvator Mundi was auctioned for a record $450 million (AED1.65 billion), making it the most expensive panting ever sold at a Christie’s New York auction in November 2017. Initially the identity of the buyer was not disclosed but it was later disclosed to be Abu Dhabi’s Department of Culture and Tourism. It has been loaned to Louvre Abu Dhabi for a long-term.

The masterpiece will be loaned by Louvre Abu Dhabi to Musee du Louvre to be displayed at a planned Leonardo Show, held to mark the renowned artist’s 500th death anniversary from October 2019 to February 2020.