Diane Arbus and the Use of Black and White 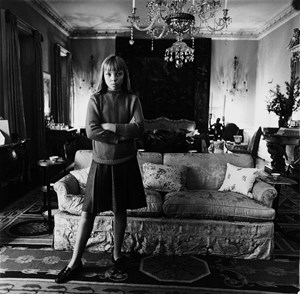 Diane Arbus (Diane Nemerov) was born in New York City in 1923 to a wealthy Jewish family. Despite the prosperity of her surroundings, Diane’s early life was difficult. Her father worked long hours running his own company and her mother was prone to depression, often leaving her three children in the care of governesses and maids. It was a childhood that Diane would struggle to come to terms with and strive to leave behind.

Diane Arbus (ne Diane Nemerov) was born in New York City in 1923 to a wealthy Jewish family. Despite the prosperity of her surroundings, Diane’s early life was difficult. Her father worked long hours running his own company and her mother was prone to depression, often leaving her three children in the care of governesses and maids. It was a childhood that Diane would struggle to come to terms with and strive to leave behind.

Her creativity and style began to emerge at an early age and she began creating paintings and drawings whilst still at high school. Her father encouraged her creativity and put an emphasis on painting as a medium for her work. Unbeknownst to him, Diane found the medium unsatisfying. 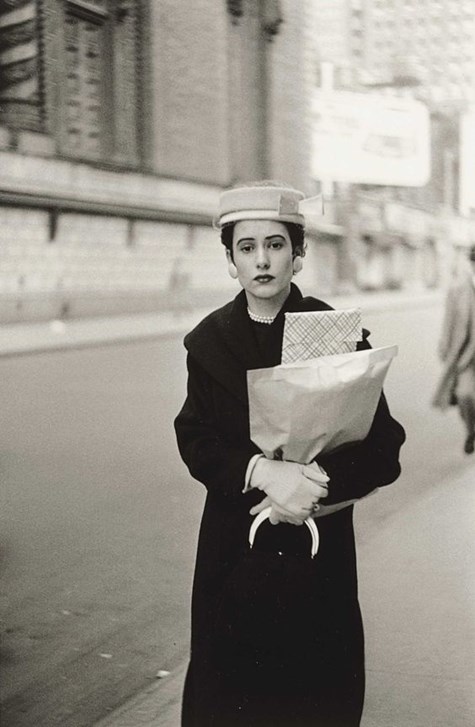 In 1941, at the young age of just 18, she married the actor Allan Arbus, who encouraged her creativity and talent, introducing her to the art of photography and turning their small bathroom into a darkroom. Diane’s father, David, hired the duo to take photographs for his fur business. It was their first professional project.

Inspired by this new outlet, Diane signed up for classed with the renowned photographer, Berenice Abbot. When Diane became pregnant in 1945, she used her newfound skill to document her gestation period and journey to motherhood.

Together, Allan and Diane Arbus used their photography skills to work in the fashion and advertising industries, securing features in high profile magazines. It wasn’t long before Diane began to explore her own photographic style, studying under the photographer Lisette Model. 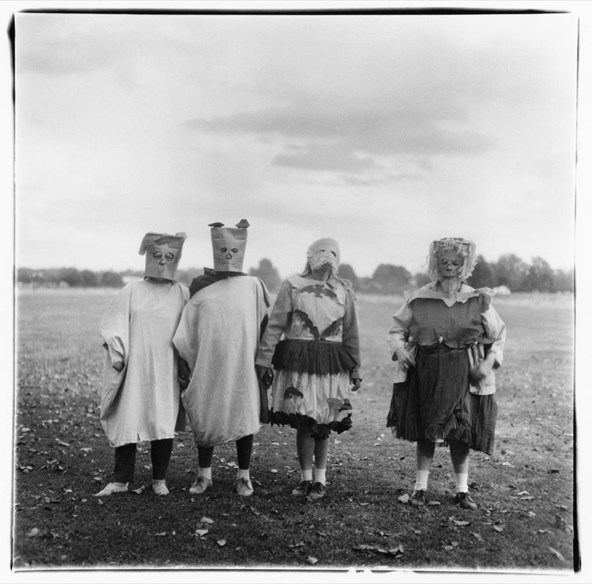 In 1959, Diane and Allan’s marriage began to break down and the two separated, leaving Diane with the space and time to pursue her own work with more passion. She moved to a new apartment which she turned into a working space, sleeping on a temporary mattress on the floor. As Diane pursued her personal work and scraped together a living through occasional commercial projects, Allan continued to work in the fashion industry, allowing Diane access to professional equipment and dark rooms.

As a long-term inhabitant of New York City, Diane began to take photographs of the people she encountered, visiting often overlooked locations including morgues, body-building competitions, youth gang meetings and seedy hotels. Diane, a privately-educated, upper-middle class mother, left her early upbringing behind to passionately tell the story of New York City’s underdog and underrepresented inhabitants. She sought out people who were marginalised, left behind or singled out.

Despite the relative luxuries of her early life, Diane openly identified herself an outcast, claiming a feeling of kinship with those she photographed. In her work, she elevated her subjects from forgotten individuals to celebrated subjects of fascination. 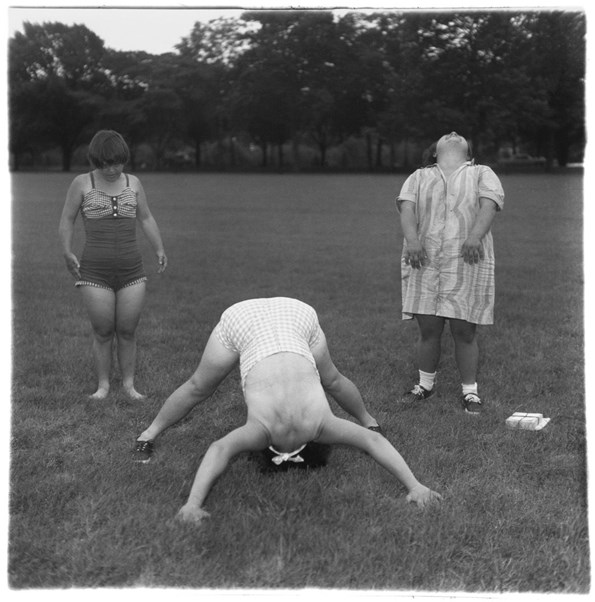 In July 1960, Esquire magazine ran several of Diane’s photos and public interest in her work grew rapidly. By the mid 60s, Diane Arbus had become one of the most prominent photographers of her generation.

As Diane’s professional life flourished, her personal life faced challenges. She was known to suffer with bouts of depression. Arbus committed suicide in 1971, still living in New York City.

Diane Arbus’ work continues to capture the imagination and has remained popular long beyond her death. Some critics condemn Arbus for objectifying her subjects, whilst others celebrate her deep compassion and sensitivity.

The vast majority of her work is created in black and white or sepia tones. Her photographs strip her subjects back to their barest essence, often capturing a moment of raw honesty. The black and white image is fairly unique to photography, a medium which offers to capture the world exactly as it is for a fleeting moment of time. By creating the images in black and white, Arbus at once captures a fleeting moment of reality and also reminds us that she is the author of that image, stripping it of its colour and dictating the way we look at that moment. 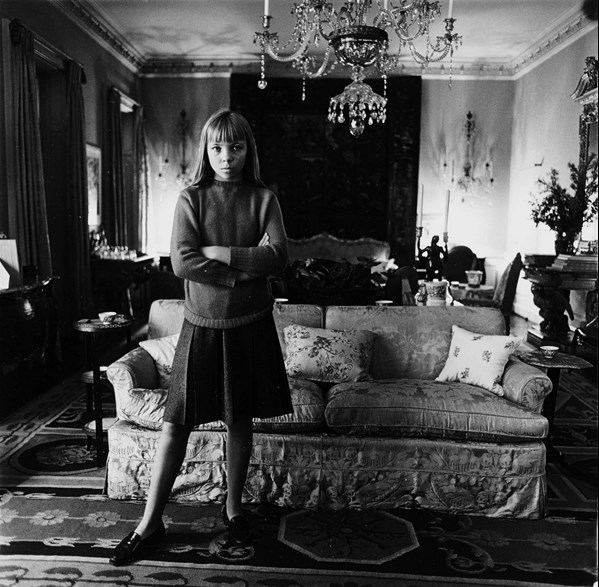 Arbus’ photographs take the world as we know it, and strip back the colour. Many of her models were fairly ostentatious characters – body builders, heavily tattooed people, performers and drag artists. Arbus would often capture these characters at a moment when the performance seems to have stopped or paused for a second, when the real humanity emerges, just for a brief second. By stripping the photographs back to black and white, she strips the showmanship and the glitz away, leaving only the person and their relationship to the world around them behind. 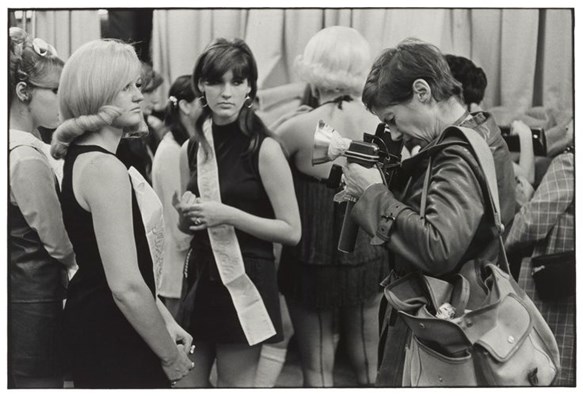 For Arbus, whose upbringing left her frustrated and abandoned in a world that was often pretentious and conceited, stripping away the colour may have been a way of controlling her world and of removing one layer of performance – an attempt to get closer to the essence of humanity, that which her subjects had so often been asked to cover up, or had themselves run away from. For people at the margins of a judgemental society, Arbus allowed them their eccentricities, their pretences and their costumes, but through her photographs, she exposed something of what still remains beneath that surface. Her photographs haunt viewers because they capture something that feels like a rare truth, despite being full of artifice and elaborate displays of personality. She manages at once to show us something that feels real, and to deny that reality by choosing subjects who have created their own reality and built their own disguises. The black and white images further confound our confusion, feeling at once raw, timeless and real, and being at the same time a photographic device, created only in the act of capturing an image on film.