Discover Art outside the big institutions during Berlin Art Week 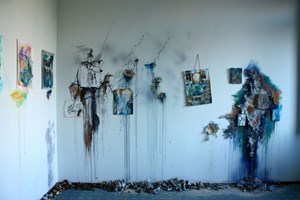 The Berlin Art Week from 13. – 18. September takes place for the fifth time and all art venues in the city time their openings and special events during this one week to create a momentum of attention at the beginning of the new season after the summer break.

The Berlin Art Week from 13. – 18. September takes place for the fifth time and all art venues in the city time their openings and special events during this one week to create a momentum of attention at the beginning of the new season after the summer break.

With about 9000 artists living in Berlin there are many studio communities, which also open their doors for the public during the Berlin art week. One of them the HB55 Kunstfabrik in Berlin-Lichtenberg has its own in-house curator Kerstin Godschalk, who put together a solo show with Attilio Tono called ‘Time Shapes’ and invited other artists of the community to respond to Tono’s exhibition resulting in the group show of reactions. Literally time shapes the geometric sculptures and drawings by Tono as he for example dips his plaster sculptures into red wine. The wine soaks into the clean white plaster, begins to get mouldy and leaves an organic stripped pattern of colours from red to green and ochre on the sculptures surface. In the next room eight artists answer to different aspects of Tono’s work like Boje Arndt Kiesiel with his installation ‘the temporarily available’ for which he collected materials from his studio which are not in use at the moment and created four objects in form of cubes and cuboids. His sculptures only exits for the duration of the exhibition, as afterwards he will reuse the material in its original purpose.

What if an artist can’t open their private studio to the public or is not even from Berlin? Then they become creative and organise their own exhibition in form of a pop up exhibition so they can also be visible during the Berlin Art Week. The group show ‘Räume’ (= rooms) in a former office floor in Lindenstraße 20 is a successful example. The entire building is about to be renovated and until the construction work starts the rooms are empty so that each of the 49 participating artists could pick one room to represent themselves. Some of the artists really picked up the topic of room and actually played with their surroundings by taking down the wall paper, digging holes through the walls or cutting out pieces from the carpet and others took the chance to show examples of their art practice. The resulting exhibition is a joyful discovery of talented artists in a rather unusual setting.

What becomes more and more common is that private collectors make their art collection accessible and show them to the public in from of private museums of public tours through their private homes. A rather recent development is the formation of a group of medium-sized art collection called ‘Mittlere Zusammenarbeit’, who shows selections of their collections together in from of temporary exhibitions. Their latest exhibition can be seen at the Salon Dahlmann, where artworks of twenty contemporary artists from the collection of Haus N and Wemhöner collection are presented under the headline ‘ach, die sind ja alle so unpolitisch’ looking at the current generation, who at first sight might seem less political and activist in comparison to the 68 movement. The exhibition proofs the opposite and shows works by activist artists like Santiago Sierra and Alfredo Jarr as well as artists like Brigitte Waldach and James Bridle, who do express political content in an aesthetic manner.

Berlin is full of art and every one who makes or owns art shows it during this art week in September, there is no chance to overlook it.

By Lavinia Rosen
Lavinia Rosen holds a BA in politics and public administration as well as an MA in art business and contemporary art from the Sotheby’s Institute of Art in New York and London. After graduating in early 2016 she returned to her hometown Hamburg, Germany, where she runs a pop-up gallery KUNSTVOLL and works as a curator and art advisor in multiple disciplines of the art scene in Hamburg. She loves to travel around to visit exhibitions and meet artists all over Europe.