Diversity in the Arts: Why Are the Working Classes Still Underrepresented? 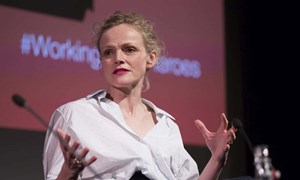 A new report, published in the UK on April 16th, claims that the working class are still dramatically under-represented in most areas of the arts including film, broadcast, publishing and performance.

A new report, published in the UK on April 16th, claims that the working class are still dramatically under-represented in most areas of the arts including film, broadcast, publishing and performance.

The so-called Panic report was put together by Arts Emergency and Create London in a bid to challenge the arts industry to step up to diversity. The report was created from interviews with 237 representatives from the creative industries. It found that the majority of high paid jobs in the arts were occupied by white, middle-class men, with just 12.4% of people working in TV and radio coming from working class backgrounds. The situation in publishing wasn’t much better at just 12.6%. In music, performance and visual arts the figure stood at a marginally more respectable 18.2%. On average, around one third of the population of the UK are from working class backgrounds, making all of these statistics a cause for concern.

Dave O’Brien, one of the authors of the report, claimed that these findings are nothing new and that most people working in the arts are very aware of the lack of diversity. “If it knows there are these social problems, why isn’t it doing better? Why is it much more like an elite profession rather than being open and meritocratic? The sector almost congratulates itself as being the good guys.”

Amongst the barriers to entry named in the report was the propensity of people in the creative industries to socialise with other creative and people working in cultural occupations, meaning there was very little room for diversity to be introduced via social connections.

Speaking at a panel discussion on being working class in the arts at the British Film Institute, actress Maxine Peak highlighted the limited perspective she had encountered in the creative industries. “There is only one class in the north, and that’s working class, and if you’re a woman you will be slightly brassy and a bit blowzy; if you’re a man you’re either aggressive or you’re angsty and poetic. That is the entire north in a nutshell.” During the same panel discussion, speakers identified cuts in youth services and lack of arts lessons in schools as major factors in the industry imbalance.

In 2017, the Labour party launched their own investigation into diversity in the arts, concluding that “class” was often not one of the factors that was considered in this conversation.

Image on top: Maxine Peake spoke of the prejudice she had regularly experienced from people in the industry. Photograph: John Phillips/Getty Images