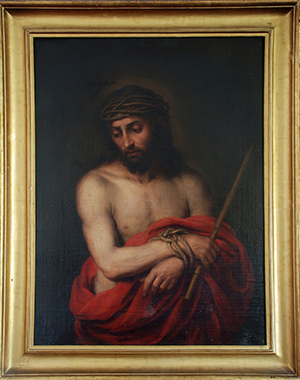 In 2018, we celebrate the Year of the Spanish Baroque painter Murillo, who is born in Seville 400 years ago this year.

In 2018, we celebrate the Year of the Spanish Baroque painter Murillo, who is born in Seville 400 years ago this year. His rich oeuvre rarely comes onto the market. Catawiki has the honor to offer the work “Ecce Homo”, attributed to Murillo and his studio. The auction starts next  Friday, March 16th and runs until March 25th at 20.00. The work has an estimated price of €200.000 to €300.000.

This ‘Ecce Homo’, attributed by Professor Enrique Valdivieso to Bartolomé Esteban Murillo and his studio, is a magnificent example of the technique and style of the Sevillian master. Created during his mature period, this painting shows Murillo's expertise in capturing the delicate muscles of the torso with his brushstroke, using colour and light to create subtle contrasts that give shape to the figure of Jesus Christ. Playing with this contrast, the artist succeeds in masterfully capturing the different textures, from the softness of the skin to the roughness of the strings that join the wrists to the harshness of the crown of thorns.

Murillo is able to capture that moment of profound introspection and emotion contained in the face of Jesus on the canvas, showing precisely the moment when, with his gaze on one side and downwards, he has accepted what will finally be his destiny.

Probably inspired by the Ecce Homo of Tiziano, which is currently kept in the Prado Museum and which Murillo knew, the Sevillian master created an iconographic model. Undoubtedly, it was a great success from the very first moment it was shown among the Sevillian clientele. Murillo uses the iconographic elements typical of the representation of the Ecce Homo such as the crown of thorns, the red tunic and the cane rod that has been placed in the hands of Jesus as a scepter. At the same time, he makes his own interpretation of the theme, humanising the painting by making it an object of deep devotion that has lasted until today.

Provenance. The work belonged to the Duchy of Seville until 1940. During the Spanish Civil War, the painting was confiscated and kept in the Prado Museum, in Madrid. After the war, in 1940, the General Commission of the Defense Service of the National Artistic Heritage returned the artwork to its owner, the Duke consort of Seville, Francisco de Paula de Borbón y La Torre, cousin of King Alfonso XIII, who was then in exile. Currently, the painting belongs to a private collection in Madrid.

The artwork has an export license for its sale within the EU.