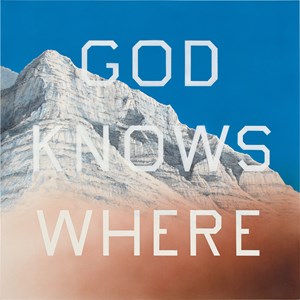 'It’s not a celebration of nature. I’m not trying to show beauty. It’s more like I’m painting ideas of ideas of mountains. The concept came to me as a logical extension of the landscapes that I’ve been painting for a while – horizontal landscapes, flatlands, the landscape I grew up in. Mountains like this were only ever a dream to me; they meant Canada or Colorado' – Ed Ruscha 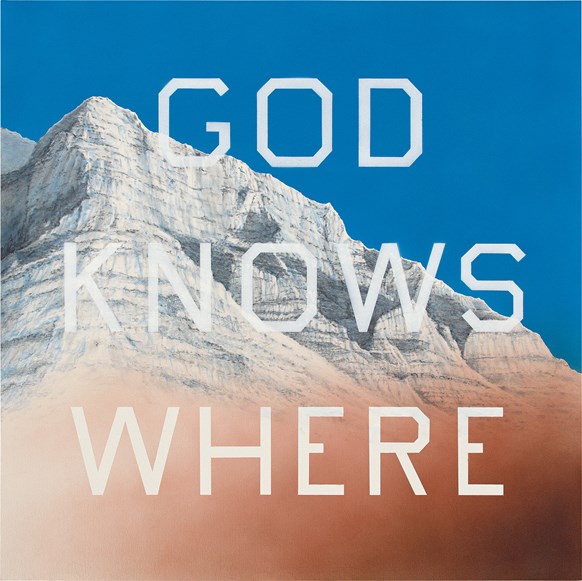 A majestic mountain top hails at the background of Ed Ruscha’s God Knows Where, 2014, while the painting’s three eponymous words, ‘God – Knows – Where’, occupy the foreground. Typical of Ruscha’s investigation of the symbiotic relationship between images and words, the present work is an exceptional example of his use of mountainous peaks as visual backdrops, referencing both the naturalistic theme of snow and the Hollywood appropriation of snowscapes, embodied most prominently by Paramount Pictures’ infamous logo. Silhouetted against a matte sky, the large mountain at the heart of the composition appears to be a cut-out, or a backdrop for a movie set. It flattens and muffles the adventurous potential of what lies beyond, accompanied only by the three words of an unknowable punchline. The text applied with a stencil in Ruscha’s emblematic font is, as the artist explains, ‘one of my own inventions, which I call “Boy Scout Utility Modern”. If the telephone company was having a picnic and asked one of their employees to design a poster, this font is what he’d come up with. There are no curves to the letters – they’re all straight lines – and I’ve been using it for years’ (Ed Ruscha, quoted in Kristine McKenna, ‘Ed Ruscha in Conversation with Kristine McKenna’, Ed Ruscha: Fifty Years of Painting, exh. cat., Hayward Gallery, London, 2009, p. 58).

At once precise and elusive, the scene within God Knows Where is identified by its title as placeless, enlivened and specified only by the heightened detail with which Ruscha composes the image. The picture balances the sublime majesty of the mountainous motif with its commonplace commercial appropriation. The integrity of the natural wonder is furthermore modified – defaced and compromised, even, by the neutral presence of the text. Indeed, as the opaque letters obfuscate the alpine view, the landscape dissipates behind the exercise of painting itself. ‘I like the idea of a word becoming a picture, almost leaving its body, then coming back and becoming a word again’, Ruscha explains (Ed Ruscha, quoted in Calvin Tomkins, ‘Ed Ruscha’s L.A.’, The New Yorker, 24 June 2013, online). With God Knows Where, the artist presents an homage to linguistic and iconographic form, fusing their distinct appearances into a single graphic whole. The scenic environment of the painting also happened by chance, Ruscha elucidates. ‘It’s not a celebration of nature. I’m not trying to show beauty. It’s more like I’m painting ideas of ideas of mountains. The concept came to me as a logical extension of the landscapes that I've been painting for a while – horizontal landscapes, flatlands, the landscape I grew up in. Mountains like this were only ever a dream to me’ (Ed Ruscha, quoted in Elisabeth Mahoney, ‘Top of the Pops’, The Guardian, 14 August 2001, online).

Art historically, mountainous imagery has always been understood as ‘a shorthand for the sublime, from the pantheist canvases of Caspar David Friedrich and the Catskills of the Hudson River School to Ansel Adams’s photographs of the Rockies’, Martha Schwendener notes. Notably, Katsushika Hokusai’s clear portrayal of Red Fuji within his series of landscape prints devising Thirty-six Views of Mount Fuji, 1830-32, stands as an iconic example of how the symbol of the mountain can convey the indisputable grandeur of nature. ‘But Ruscha resists knee-jerk spiritualism (and, one might argue, his own often mentioned dormant Catholicism) by emblazoning slogans that render the scenes absurd’, Schwendener continues (Martha Schwendener, ‘Ed Ruscha—Reviews’, Artforum, New York, November, 2002, online). Indeed, the artist expands on the notion of arbitrary absurdity, presenting his own layered reasons of how the dramatic landscape elements came about. ‘The mountains emerged from my connection to landscape, and experiencing it, and especially from driving across country. They’re based on specific mountains and alterations and photographs, but they’re not really mountains in the sense that a naturalist would paint a picture of a mountain. They’re ideas of mountains, picturing some sort of unobtainable bliss or glory—rock and ways to fall, dangerous and beautiful’ (Ed Ruscha, quoted in Adam Gopnik, Ed Ruscha Paintings, Toronto, 2002, p. 7). In this sense, God Knows Where is redolent of the Pictures Generation's mission to interrogate the indexical nature of images, notably through the use of advertising imagery.

A deserted landscape containing the luminous powers of the sun as its shafts reflect upon snowy grounds, God Knows Where perfectly embodies Sterling Ruby’s claim that ‘For me, [Ed Ruscha’s] work represents the perfect balance of the apocalypse and serenity. It’s almost like it’s symbolizing some sort of dichotic meditation on existence’ (Sterling Ruby, ‘Ed Ruscha’, Interview Magazine, 20 August 2016, online). At once deatheningly mute and peacefully composed, God Knows Where indeed conjures the precarious paradox that dawns on the ambivalent notions of stillness and silence. Pairing the duplicate of a cinematic mountain as seen in travel books, posters, postcards and adventure movies, with a conversational expression conveying cluelessness, the painting stands as a superior example of Ruscha’s formulaic artistic programme, known more specifically under the umbrella of his Word Paintings begun in 1961, and continued to the present day.