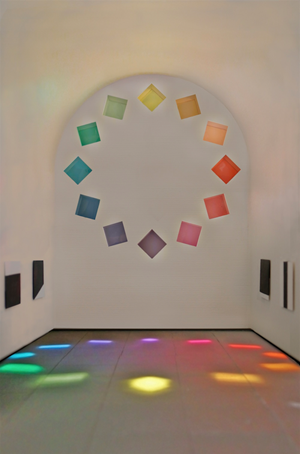 The Blanton Museum of Art has announced that it will acquire and construct Ellsworth Kelly’s Austin, a 73 x 60 foot stone building to be sited on the grounds of the Blanton at The University of Texas at Austin.

The Blanton Museum of Art has announced that it will acquire and construct Ellsworth Kelly’s Austin, a 73 x 60 foot stone building to be sited on the grounds of the Blanton at The University of Texas at Austin. The stand-alone structure, singular to Kelly’s career, comprises a 2,715-square-foot stone building with luminous colored glass windows, a totemic wood sculpture, and fourteen black-and-white stone panels in marble, all designed by the artist. The work will become part of the Blanton’s permanent collection.

Ellsworth Kelly has gifted to the Blanton the design concept for the work, including the building, totem sculpture, interior panels, and colored glass windows. The museum has launched a campaign to raise $15 million to realize the project and is pleased to announce early commitments totaling $7 million, including $2 million from Jeanne and Michael Klein, $2 million from Suzanne Deal Booth and David G. Booth, and $3 million from the Blanton family, including $2 million from the Scurlock Foundation, and gifts from Leslie and Jack S. Blanton, Jr., Elizabeth and Peter Wareing, and Kelli and Eddy S. Blanton. Beyond the $15 million project budget, UT President Bill Powers has committed $1 million, funded by earnings from the University’s Longhorn Network, to create an endowment for the care and conservation of Austin and for the research and study of Kelly’s work.

“It is a great privilege for the Blanton to share the vision of one of the greatest artists of our time,” said Blanton Director Simone Wicha. “Ellsworth Kelly’s Austin will be a joyful place of inspiration on The University of Texas campus, welcoming millions of visitors from around the world. A treasure in the Blanton's collection, it will transform the landscape of this vibrant city and have a lasting impact on all who experience it. We are deeply grateful to Ellsworth Kelly and Jack Shear of the Ellsworth Kelly Foundation for their generosity, and to our early supporters, who, with the help of others, will make this important project a reality.” 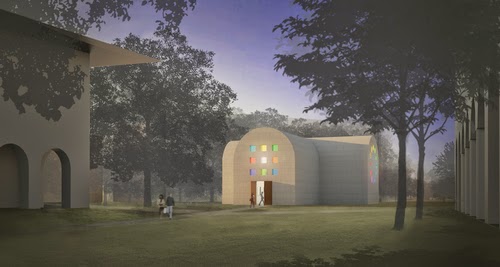 Although Kelly has collaborated with many of the world’s leading architects, Austin is the only freestanding building he has ever designed. Featuring the first works the artist has ever made in stone, it also represents the first time Kelly has represented his color spectrum in glass and light. After serving in World War II, Kelly moved to Paris in 1948 to study art on the G.I. Bill. The six years that he lived in France—1948 to 1954—shaped his art and life in indelible ways. It was in Paris that Kelly forged his artistic vocabulary and developed the vibrant color palette for which he is known and celebrated today. Austin attests to the lasting impact that the geometry of Romanesque architecture and the celebrated rose window at Chartres Cathedral, in particular, have had on his art. This building, however, has no religious affiliation, but rather is meant to be a space for contemplation.

“Austin is part of a journey that began nearly 70 years ago,” remarked Ellsworth Kelly. “In Boston in 1947, as an art student at the School of the Museum of Fine Arts, I discovered a 12th-century fresco in the museum’s collection that made a tremendous impression on me. Later, when I was living and working in Paris, I would put my bike on a train and visit early architectural sites all over France. I was intrigued by Romanesque and Byzantine art and architecture. While the simplicity and purity of these forms had a great influence on my art, I conceived this project without a religious program. I hope visitors will experience Austin as a place of calm and light.”

Originally conceived in 1986 for a private collector, the work was never realized, as Kelly’s intention was always for it to exist in perpetuity in a public space. Austin belongs to a distinguished tradition of modernist artist-commissioned buildings, such as the Rothko Chapel in Houston and Henri Matisse’s Chapelle de la Rosaire in Southern France. Austin is unique from these precedents, however, in that Kelly designed every facet of the work, including the building itself. In many ways, Austin brings this celebrated tradition into the 21st century, and will undoubtedly serve as one of the high points of the artist’s remarkable seventy-year career.

Ellsworth Kelly is regarded as one of the most important abstract painters, sculptors, draughtsman, and printmakers working today. Spanning seven decades, his career is marked by the independent route his art has taken, diverging from any formal school or art movement and by his contribution to 21st century painting and sculpture. Kelly was born in Newburgh, New York in 1923. Since 1970, he has lived and worked in upstate New York. His works are held in public and private collections worldwide. Major retrospectives have been shown at the Museum of Modern Art (1973), Whitney Museum of American Art (1982), and Solomon R. Guggenheim Museum (1996), among other venues in the US and in Europe. In 2013, celebrating the artist’s 90th birthday, special exhibitions were on view at the Museum of Modern Art, New York; Barnes Foundation, Philadelphia; Philadelphia Museum of Art; Art Institute of Chicago; San Francisco Museum of Modern Art; Tate Modern, London; Centre Pompidou, Paris; and National Gallery of Art and Phillips Collection in Washington, DC. In 2013, Kelly was awarded the National Medal of Arts, presented by the President of the United States.