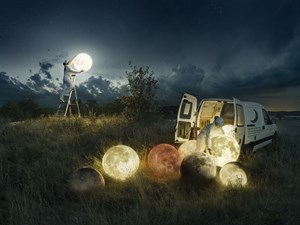 Managing to create places that challenge both reality and your imagination – that is what artist and photographer Erik Johansson does. His skilfully composed, surrealistic photographs invite the viewer to an exciting journey to fantacy. One where each detail is carved out to take you beyond reality, to the stories of the surreal reality. The stories that, among other things, are meant to make you reflect on what we are doing to the planet. Now opening Places Beyond at Fotografiska Stockholm.

Managing to create places that challenge both reality and your imagination – that is what artist and photographer Erik Johansson does. His skilfully composed, surrealistic photographs invite the viewer to an exciting journey to fantasy. One where each detail is carved out to take you beyond reality, to the stories of the surreal reality. The stories that, among other things, are meant to make you reflect on what we are doing to the planet. Now opening Places Beyond at Fotografiska Stockholm.

A beloved and playful artist and photographer is back at Fotografiska Stockholm, and in connection with the opening of the exhibition Places Beyond, his second photo-book with the same titel is released by the publishing house Max Ström. Erik Johansson is the wizard that, with equal amounts technical skill, curiosity, and boundless imagination, manages to conjure up worlds that at first feel familiar to us, until we realise that they are not familiar at all.

“Even if the worlds I create often are impossible, I want it to seem like they could exist. Realism is an important ingredient in my image-making. I always prefer to shoot as much as possible on site, in the environment where it's meant to take place, rather than in a studio, and then combine it later”, Erik Johansson says. 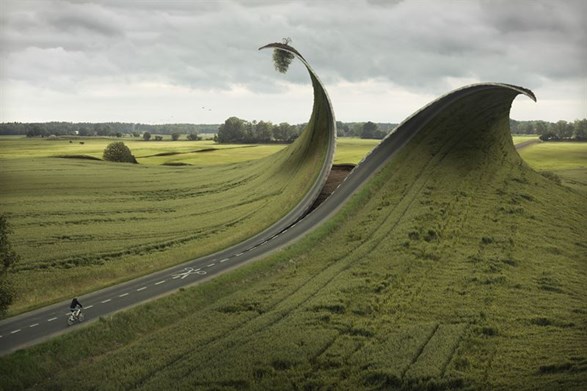 He constantly plays with our experience of reality, and through surreal absurdity and humour, he takes the viewer on a journey of imagination, to places that feel familiar regardless your own roots: places that you, once you've set your focus, realise have very little to do with reality, specifically. The starting point is often “but what if...?!”. What if there was someone who made sure to keep the moon in its best, shimmering state – what would that look like? And what about the person whose job it is the flip the switch on night and day: they must surely keep an eye on their watch to see when it is time to change? Or the man that steps out of his canoe and sees that the lake behind him has cracked like a mirror in the wake of his canoeing, and wonders “how did this happen, was it my fault?”.

“Stories and scenes kind of pop up. I see them constantly around me, and love to explore them. I become more and more interested in telling these stories, in surprising the viewer and making them think, for example about what we are doing to our dear planet”, Erik Johansson says.

It's important to know that Johansson himself photographs all parts of the image and then puts them together into a finished work, using his unique style. They are works with universal qualities, created out of an incredible attention to detail, that reach into the viewer regardless of age, culture or gender. Young or old doesn't matter – everyone can see the cleverness and imagination in his images.

“Erik Johansson is like a Magritte of photography, that with his photographic canvas makes us amazed, makes us laugh, and makes us want to step straight into his world. An image-magician. A realist. A photography-craftsman that weaves the absurd into the everyday of our contemporary world. With visual roots that manage to unite across country borders, his photography has gained recognition around the world. In Places Beyond, Johansson's biggest exhibition so far, he continues to challenge the limits of imagination and search for the places beyond”, says Lisa Hydén, exhibition manager at Fotografiska Stockholm. 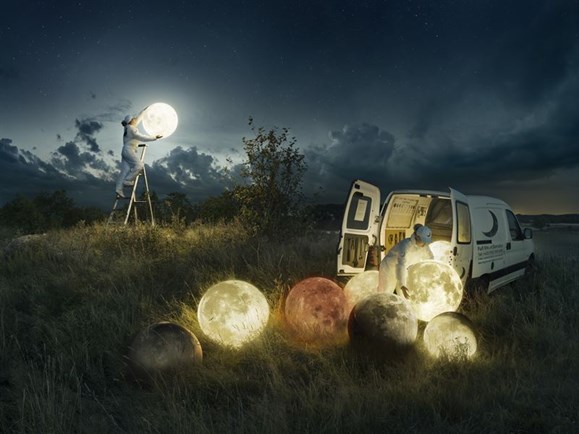 “To create a perspective-illusion like the one in The Architect, all perspective lines need to be parallel, and not converge into one point – that is how the double perspective is created. And it's not possible to capture with the camera alone, it takes a lot of conscious post-processing to get it exactly right.”

The technique of creating images by combining photographs that he's taken in many different places is something that Johansson has developed over several years and feels comfortable with. But he is constantly moving forward in his exploration of absurdist expression.

“The big challenge now is to take the process one step further in the creation of this surreal reality, and have more elements interact directly in the same place. It triggers me to build scenes that really pique the imagination. And I notice that the more I move internationally, the more I look back to my own home environment: an environment that seems to titillate and to awake associations in not just myself, but many others.”