Ernest Mancoba at the Centre Pompidou 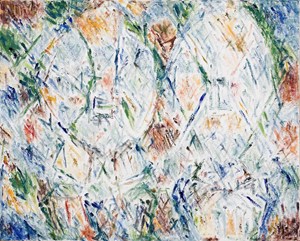 An artist, writer and thinker, Ernest Mancoba lived through the whole of the 20th century. For the first time in France, this exhibition showcases this path erased by racism. Both thematic and chronological, the exhibition retraces Mancoba's deepest concerns; the importance of appealing to the subconscious and formulating the unsaid; the need to return to the spiritual root of society and a faith in the materialistic, Marxist-like transformation of society.

An artist, writer and thinker, Ernest Mancoba lived through the whole of the 20th century. For the first time in France, this exhibition showcases this path erased by racism. Both thematic and chronological, the exhibition retraces Mancoba's deepest concerns; the importance of appealing to the subconscious and formulating the unsaid; the need to return to the spiritual root of society and a faith in the materialistic, Marxist-like transformation of society.

The Centre Pompidou continues its work of shedding light on non-Western artists. Married and sharing the same Parisian studio, Ernest Mancoba and Sonja Ferlov Mancoba were exiles in Paris for almost all of their respective careers. In homage to the scope of their indissociable and singular practices, they are showcased in two distinct spaces. Ernest Mancoba was an artist, writer and thinker whose life spanned the whole of the 20th century. After fleeing to Paris from the apartheid in South Africa, he was interned in a labour camp during the war by the Germans. After the liberation, Mancoba and his wife, Sonja Ferlov, moved to Denmark for five years. Through their friend Asger Jorn, they were involved in the early days of the Cobra movement. Cobra intersected with Mancoba’s deeper interests, pervading his whole approach since leaving South Africa: the importance of communicating with the subconscious and formulating the unspoken, the necessity of getting back to the spiritual roots of society through being attentive to folklore, a belief in a materialistic transformation of society that was close to Marxism, and the not merely pan-Nordic but universalist ambition of art. However, Mancoba did not remain long in Cobra. Ever constructed and semantic, his abstraction was questioned, and underlying racism relegated him to the status of an invisible man or "black dot" in the movement.

Ernest Mancoba is an unclassifiable artist, as witnessed by the scope of his historical career, his transnational trajectory through societies that were repressive or not very open to a black man having an autonomous career and a visual language half-way between figuration and abstraction. For the first time in France, this exhibition proposes to examine this trajectory that was erased by racism, a life spent in isolation and the complexity of his artistic quest to reconcile the political and formal worlds, merging in a universal aspiration half-way between the Bantu "ubuntu" theory of reconciliation, Christianity and Marxism.

The exhibition is both thematic and chronological, inviting visitors to an initiatory experience. It opens with a sound threshold as Mancoba’s voice resounds, leading to an immersive room dedicated to his successive struggles throughout his life of exile. Mancoba’s relentless search for "the central figure" is omnipresent. The different parts of the exhibition radiate around it, designed as motifs in a unified dance where only one image seems to move, the reflection of the artist’s relentless quest for unity.

The exhibition reaches out toward this paradoxical dance. In fact, Mancoba wanted to learn to dance when he arrived in Paris from Cape Town via London in 1938. He procured a manual to enable him to practise in his room near Montparnasse. One evening, a friend took him to the Bal Nègre, where he felt distinctly ill at ease. To his friend’s repeated calls for him to dance, he responded firmly: "I shall dance in another society". However, in the book devoted to the artist by the academic Elza Miles, Mancoba describes dance as the ultimate level of communication. He was no doubt referring to the rhythmic dance that vibrates in the artist’s work, where the figure turns constantly on itself. It is precisely this unresolved tension between historical oppression and humanistic and poetic resistance, between the impossible life and Ernest Mancoba’s liberated work that the exhibition highlights.