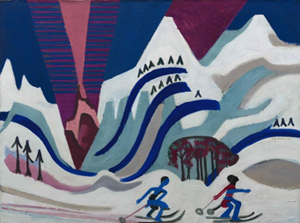 Sotheby’s autumn auction, Swiss Art/Swiss Made will feature an outstanding example of 20th -century avant-garde painting: Ernst Ludwig Kirchner’s powerful expressionist winter landscape, Schneeberge mit Skiläufern. This depiction of winter scenery was realised in the countryside surrounding the Swiss mountain town of Davos, where Kirchner settled in 1917. The work is characterised by a high degree of abstraction: alongside the range of intense colour and the flat planes of the composition, the effects of light and shadow capture the atmosphere of sunset in the expressionist painter’s distinctive style. This masterpiece will be offered for the very first time at auction as the leading highlight of the Swiss Art/Swiss Made sale in Zurich on 5 December, with an estimate of CHF 1,000,000 – 1,500,000.

In 1917, at the age of 37, German painter Ernst Ludwig Kirchner moved from Berlin to Davos. After undergoing various treatments in a number of sanatoriums to treat his mental health issues, as well as alcohol and drug addiction, Kirchner hoped that the medical treatment and physical activity he would undertake in Graubünden’s Alpine mountains would help him to recover mentally and gain physical strength. From then on, the area surrounding the Landwasser valley shaped the motifs of his paintings and his artistic output until his death by suicide in 1938.

Executed in 1928, Kirchner’s large-scale painting Schneeberge mit Skiläufern shows two skiers on wooden skis against the backdrop of what is thought to be the Tinzenhorn. The artist captures the atmosphere of a scenic winter’s evening, distilling the image of a setting sun against imposing mountains, his distinctive style – tending towards abstraction - coming to the fore with bright colour and bold lines.