Exhibition on one of the most controversial events of the 20th century: the Vietnam War is now open 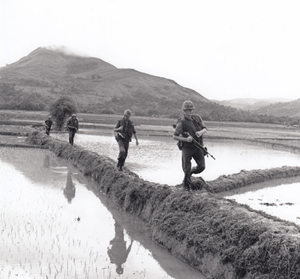 The New-York Historical Society presents a groundbreaking exhibition on one of the most controversial events of the 20th century: the Vietnam War.

The New-York Historical Society presents a groundbreaking exhibition on one of the most controversial events of the 20th century: the Vietnam War (October 04, 2017 - April 22, 2018). Populating a 3,000-square-foot gallery with interpretive displays, digital media, artwork, artifacts, photographs, and documents, the exhibit provides an enlightening account of the causes, progression, and impact of the war. Spanning the duration of U.S. involvement in Indochina from 1945 to 1975, the narrative incorporates perspectives that cover both the home front and the war front.

Displays feature such topics as the Cold War, the draft, military campaigns initiated by both sides, the growth of the antiwar movement, the role of the president, and the loss of political consensus. Throughout the exhibition, explore themes of patriotism, duty, and citizenship through key objects, including a troopship berthing unit, vibrant antiwar posters, artwork by Vietnam vets, a Viet Cong bicycle, the Pentagon Papers, and historical film footage. Long overdue in the realm of public history, the exhibit not only provides a chronological and thematic analysis of the Vietnam War but also inspires a fuller, more diverse conversation about the war. The exhibition is curated by Marci Reaven, vice president of history exhibitions. The exhibition's illustrated companion book may be purchased at the NYHistory Store.

Watch videos, hear oral histories from veterans, listen to music, see dozens of historical photographs, and learn much more on the exhibition website.

Men of the U.S. 7th Marines, part of the massive U.S. troop buildup, move along rice paddy dikes in pursuit of the Viet Cong, 1965. National Archives at College Park, MD