Face to Face with Krijn: The First Dutch Neanderthal Now Has A Face 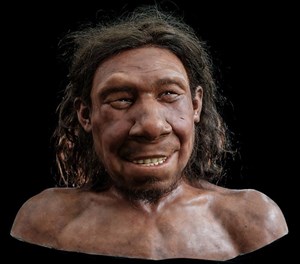 In 2009 a fragment of the skull of the first Neanderthal in the Netherlands was presented at the Rijksmuseum van Oudheden (National Museum of Antiquities). That Neanderthal now has a face.

In 2009 a fragment of the skull of the first Neanderthal in the Netherlands was presented at the Rijksmuseum van Oudheden (National Museum of Antiquities). That Neanderthal now has a face. The Kennis brothers, world-famous palaeo-artists, interpreted the characteristics of the fossil and other Neanderthal skulls to arrive at the reconstructed face of ‘Krijn’, a young man with a conspicuous lump over his right eyebrow. This lump is the result of a small tumour.

Krijn on display | The fossil and the reconstruction will be on display together until October 31, 2021 in the museum’s exhibition Doggerland. Krijn was one of the inhabitants of Doggerland, the prehistoric landscape now under the sea off the Dutch coast.

Young Man With a Benign Tumor

The fossilized orbital bone of the ‘first Neanderthal in the Netherlands’ is some 50,000 to 70,000 years old and was found twenty years ago in Zeeland by amateur palaeontologist Luc Anthonis. The fossil had been removed from the North Sea floor off the Dutch coast with a suction dredger. Examination by experts at Leiden University and the Max Planck Institute in Leipzig revealed that it came from the skull of a young man with a fairly sturdy build. Analysis of stable isotopes – varieties of nitrogen and carbon atoms – show that he mostly ate meat. One striking feature is the small hole just above the pronounced eyebrow. This was found to have been caused by a benign tumour under the skin, a phenomenon never before observed among Neanderthals.

The researchers gave the young Neanderthal the nickname ‘Krijn’. To scientifically reconstruct Krijn’s face, the palaeo-anthropological artists of Kennis & Kennis Reconstructions used the characteristics of the North Sea fossil identified by the researchers, digital matches with comparable Neanderthal skulls, and the latest findings about Neanderthals and their features, such as eye, hair, and skin colour. The Kennis brothers have made many previous reconstructions of Neanderthals and other prehistoric hominids, including Ötzi the Iceman.

Krijn lived in the prehistoric landscape that is now under the North Sea, more than 50,000 years ago. The sea level was then 50 metres lower than it is today. Mammoths, woolly rhinoceroses, reindeer, horses, and Neanderthals roamed this steppe, which was cold but offered food in abundance. This region, Doggerland, and its inhabitants form the subject of the exhibition of the same name in the Rijksmuseum van Oudheden.

The exhibition tells the story of almost one million years of human habitation and of the changing landscape and climate of this rich, vast prehistoric landscape off the Dutch coast. Krijn and the other finds show that further research and protection of the North Sea floor are of great scientific importance to Dutch and international archaeology and palaeontology.