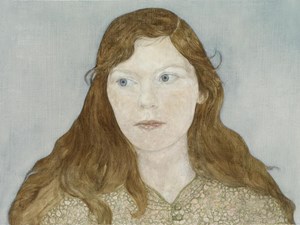 This year's BP Portrait Award was granted to a familiar face, since it marks the third time that artist Clara Drummond submitted a portrait of her friend, Kirsty Buchanan, to the painting competition.

This year's BP Portrait Award was granted to a familiar face, since it marks the third time that artist Clara Drummond submitted a portrait of her friend, Kirsty Buchanan, to the painting competition.

The winning piece, titled Girl in a Liberty Dress, was selected from over two thousand entries from artists all around the world. According to the judges, Drummond's work was chosen for its “subtle, enigmatic nature, and for the indelible impression the artist's skill makes on the viewer”.
Meant to showcase the very best in contemporary portrait painting, the work of the Award finalists will be exhibited from the23rd of June to the 4th of September at the National Portrait Gallery.
Now in its thirty-seventh year at the National Portrait Gallery, and twenty-seventh year of sponsorship by BP, the first prize of £30,000 makes the Award the most prestigious international portrait painting competition of its kind and has launched the careers of many renowned artists.
image: Girl In A Liberty Dress. Clara Drummond's friend and fellow artist Kirsty Buchanan also sat for her in 2013 and 2014 PA
Source
Source
By Maria Martens Serrano
Maria Martens Serrano is a Dutch-Salvadoran writer. She studied under a liberal arts program at University College Utrecht, going on to graduate with an MSc in Sociology from the University of Amsterdam. Exploring a broad range of interests, Maria previously worked with a news website and a human rights NGO, before becoming involved with several art fairs in the Netherlands. She now writes on topics of arts and culture. In early 2015 Maria joined the team of Artdependence Magazine as editor and contributor.