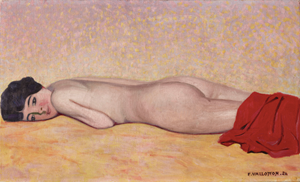 Félix Edouard Vallotton (December 28, 1865 – December 29, 1925) was a Swiss/French painter and printmaker associated with the collective known as Les Nabis.

Félix Edouard Vallotton (December 28, 1865 – December 29, 1925) was a Swiss/French painter and printmaker associated with the collective known as Les Nabis. He was an important figure in the development of the modern woodcut. In order to show the heat that is bearing down upon this young woman, Félix Vallotton used the pointillism technique, a method of painting that enabled him to depict the vibration of air that has been warmed by the sun. This establishes a contrast to the evenly-painted sand upon which the girl is lying. At Christie's Swiss Art Sale in Zurich, 18 September.