Firing up Weird Science at the Whitney 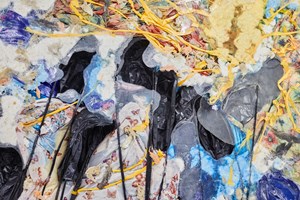 Kevin Beasley (b. 1985, Lynchburg, VA) engages with the legacy of the American South through a new installation that centers on a cotton gin motor from Maplesville, Alabama. In operation from 1940 to 1973, the motor powered the gins that separated cotton seeds from fiber. Here, the New York-based artist uses it to generate sound as if it were a musical instrument, creating space for visual and aural contemplation.

Image: A detail from “Reunion.” The back of each sculpture includes dyed, resin-covered cotton bunches. For the works, Mr. Beasley ordered bales of cotton weighing some 2,500 pounds.CreditChristopher Gregory for The New York Times

A couple of weeks ago, the artist Kevin Beasley was vroom-vrooming his maroon muscle car, a 2010 Dodge Challenger, from his Queens studio to a temporary Brooklyn outpost in a cold, steady rain.

“I’m a car guy,” said the affable Mr. Beasley, who once studied automotive design. It wasn’t a hot rod engine he was racing to see, however, but a century-old cotton gin motor (75 horsepower) that is the centerpiece of his solo exhibition “ Kevin Beasley: A view of a landscape,” which opens on Saturday at the Whitney Museum of American Art. 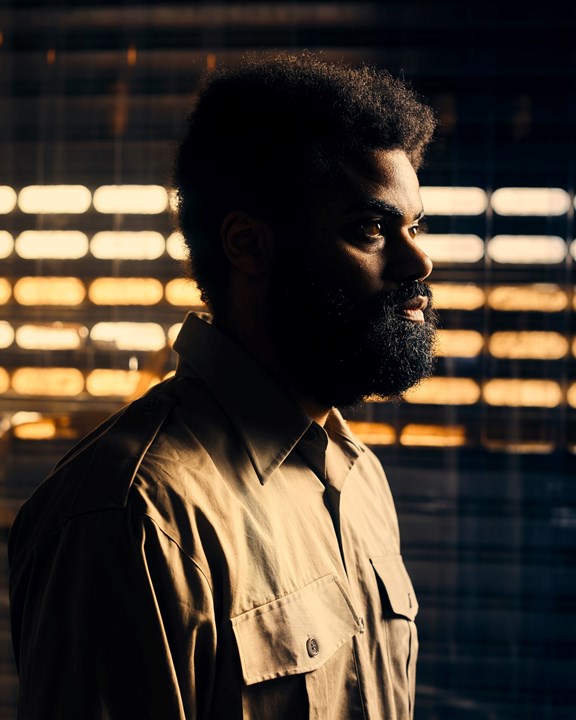 As part of the show, and with the help of complicated sound equipment, he will occasionally “play” the motor like a musical instrument and has invited his own scheduled guests to do the same; they may also perform in other ways he hasn’t yet decided. In doing so, he will contrast that joyous new activity with King Cotton’s legacy of slavery and poverty in the South.

Mr. Beasley was raised in Lynchburg, Va., and members of his family still own a farm a couple of hours south, in Valentines, Va., where the crop has been grown.

“There’s a story here that I think talks about migration, geography and ancestry,” said Mr. Beasley, who pointed out that he is very likely the descendant of slaves. “But it’s really a Conceptual work,” he added.

Christopher Y. Lew, the Whitney curator who organized the show, said: “Kevin has taken the history of the gin and tweaked it. He’s making history malleable. We can grapple with our past instead of being burdened by it.”

The show is revving up the artist’s career, too. At 33, Mr. Beasley is quite young to get the museum’s eighth-floor space all to himself, and he is making the most of it. 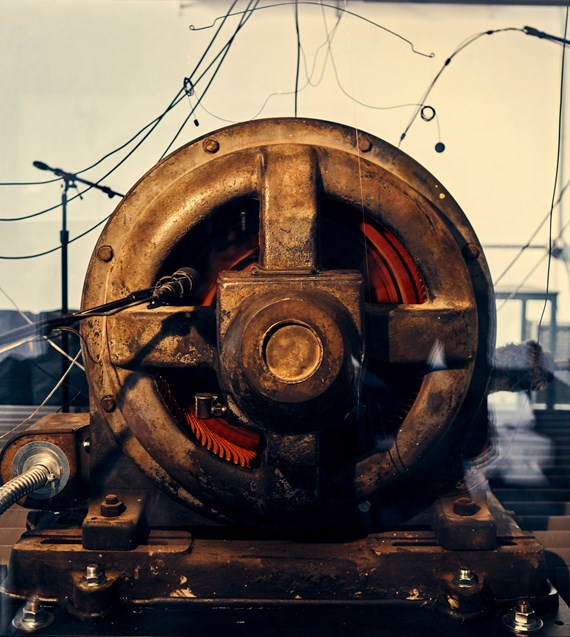 A cotton gin motor will be exhibited in Mr. Beasley’s “A view of a landscape,” his new solo show at the Whitney Museum of American Art. (This image from his studio does not show the final version.)CreditChristopher Gregory for The New York Times

“This is by far the most complicated thing I have ever done,” Mr. Beasley said, arriving at his Brooklyn destination to experiment, in his words, like a “weird scientist.”

Overflow visitors from the Whitney’s mobbed Andy Warhol show will find three monumental reliefs — he calls them “slab sculptures”— made by embedding raw cotton, clothing and other objects in resin. Each measures 8 by 10 feet and weighs more than 800 pounds.

Then comes the showstopping element: the cotton gin motor, encased in a soundproof vitrine and lighted to give it a ghostly presence. Mr. Beasley talked about it as if it were a monster in a box: “It needed to be fed,” he said.

Microphones hooked up to the motor and connected to a synthesizer and a mixer will allow him to enhance and manipulate the machine’s eerie whirring and clicking, and to turn it into an electronic symphony of sorts. A few days before the show opened, Mr. Beasley worked inside the vitrine at the Whitney, painstakingly fine-tuning the microphones and at one point splaying himself over the motor to get the positioning right.

The results will be heard only in a discrete listening room: The sound is separated from the performance space, much as Eli Whitney’s invention separated cotton fibers from their seeds, performing the task at a greater speed than the human hand. Benches will encourage people to linger. Underneath them will be amplification equipment known as “butt kickers.” (The vibrations created are intense enough to border on a massage.)

“I used to D.J. at terrible Yale parties,” Mr. Beasley said, recalling his nights in graduate school. While he spoke, he fiddled with the dozens of knobs on the control panel as multicolored lights blinked.

Mr. Beasley said that because he is a black artist using cotton as a subject, his work inevitably touches on race and slavery, but he is at pains to sound more than one note. “I feel the responsibility to make it more than that,” he said.

Courtney J. Martin, a deputy director and the chief curator at the Dia Art Foundation, who knows Mr. Beasley and his work, said that the artist has a knack for enlivening museums with his offbeat approach to large-scale sculptures.

“As a viewer, you can’t be passive with his work,” Ms. Martin said. “He wants you to participate.”

The Whitney project had its genesis in a 2011 family reunion the artist attended at the Beasleys’ farm in Valentines. His father grew up there, and it’s “a meaningful space,” he said. Seeing the gravestones of relatives on the property left a mark. “It brings up intense emotions,” he said. “When I pass away, that’s where I want to be buried.”

During the visit, he picked cotton for the first time, as it hadn’t been planted there before, and was surprised to find “it’s really pleasurable,” he said. “A very sensual thing.” But it also shook him to think of his ancestors and others who were enslaved to provide ever more material for gins to process.

Cotton’s ubiquity today kept the memory fresh. “You’ve had this emotional experience, and you look down and you’ve got a really nice cotton shirt on,” Mr. Beasley said. “It’s confusing.”

He was getting his master’s degree in fine arts at the time, and he took some cotton back to Yale — not insignificantly, the institution that educated Eli Whitney and was named after Elihu Yale, a British merchant and slave trader. 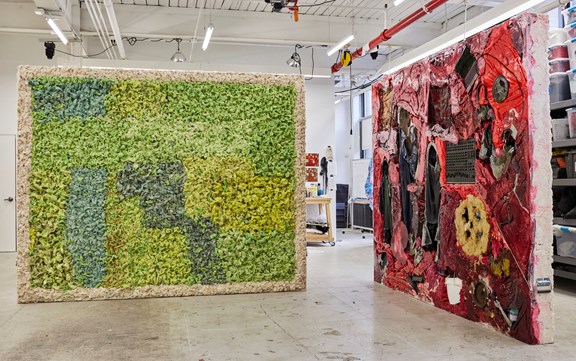 In Mr. Beasley’s studio, resin sculptures include, from left, “Campus” (2018) and “The Acquisition” (2018). They will be exhibited at the Whitney. CreditChristopher Gregory for The New York Times

“I was, like, how do I process this?” Mr. Beasley recalled. The internet provided a path. On eBay he came across an ad for a cotton gin motor that was used on a cotton farm from 1940 to 1973. The motor operated throughout significant events in 20th-century American history, including World War II, Vietnam and the civil rights movement.

Not long after, Mr. Beasley traveled to Maplesville, Ala., to meet with the farmer who had posted the ad. He found himself just 30 miles from Selma, the starting point of the historic 1965 civil rights march, during which Alabama state troopers had attacked demonstrators on a day that came to be known as “Bloody Sunday.”

“I knew he was white,” Mr. Beasley said of the farmer. “It was a little risky. I wasn’t sure what was going to happen. But he was so generous, and it felt like he had never had someone come and say, ‘Just tell me everything.’”

Not only did the farmer give his life story and details of the machine’s history, but he also said he could remember the way the motor sounded decades ago, “but he had no language to describe the noise,” Mr. Beasley recalled.

That visit informed his slab sculptures — “The Reunion, “Campus” and “The Acquisition,” all from 2018 — which have crusty surfaces, making them seem as if they had been somehow excavated after being preserved in amber. A detail from “Reunion.” The back of each sculpture includes dyed, resin-covered cotton bunches. For the works, Mr. Beasley ordered bales of cotton weighing some 2,500 pounds.CreditChristopher Gregory for The New York Times

The objects embedded include a computer, a Yale sweatshirt, blackface clown masks and a pair of overalls. The back of each sculpture is a field of dyed, resin-covered cotton bunches. For the works, Mr. Beasley ordered five bales of cotton, weighing some 2,500 pounds.

His family’s reaction to the project so far has been “supportive,” Mr. Beasley said. “They are moved by the fact that I am bringing this up, in my own way.”

When the show opens, the gin motor is likely to grab visitors’ attention. Mr. Beasley compared it both to a patient undergoing an operation and to a singer performing. The motor is rich in metaphor, and he said he felt a certain vulnerability in displaying it, after having it all to himself.

“That’s an artist life — there’s the decision to make the work, but then the decision to share it,” said Mr. Beasley, now still and reflective and no longer furiously shifting gears. “It’s now accompanied with someone else’s experience. For me, that’s a struggle.”

Kevin Beasley: A view of a landscape