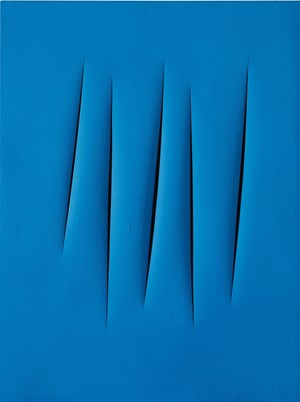 Rendered in deep azure blue, Concetto spaziale, Attese is a captivating example of Lucio Fontana’s celebrated series of slashed canvases. Executed in 1965, at the apex of the artist’s critically acclaimed career, the work displays five asymmetrical incisions that violently perforate an otherwise smooth and pristine canvas. Alluring and hypnotic in their rhythmic intervals, the tagli, or cuts, transport the viewer into a dynamic sculptural realm of space and depth, perfectly epitomising Fontana’s intent “to give the spectator an impression of spatial calm, of cosmic rigor, of serenity in infinity” (Lucio Fontana cited in: Enrico Crispolti, Lucio Fontana, Catalogo ragionata di sculture, dipinti, ambientazioni, tomo I, Milan 2006, p. 105). This is further emphasised by the vibrant blue palette which, much like the transcendent paintings of Mark Rothko, draws the viewer into introspective contemplation.

Fontana was deeply inspired by the ground-breaking developments in cosmic exploration which came to define the Twentieth Century. In boldly rupturing the picture plane of the tagli, he sought to express a seminal redefinition of the concept of space within art. Having advanced his intellectual theory of Spatialism over five formative manifestos, Fontana forged a path toward radical advancements in artistic ideology that sought to engage technology and find expression for a fourth dimension: space-time. He first embarked upon his tagli in the autumn of 1958 and developed the motif by bathing his canvases in an extensive palette of hues that ranged from blazing reds, oranges and pinks, through more muted white and grey tones, to shimmering baroque golds, silvers, and, as evidenced in the present work, vivid blues.

The crisp and syncopated incisions in Concetto spaziale, Attese are infused with the artist’s unbridled enthusiasm for space as ineffable and infinite yet brimming with the promise of uncharted and boundless adventure – the ultimate realisation of his revolutionary concept of Spatialism. As the artist proclaimed: "My cuts are above all a philosophical statement, an act of faith in the infinite, an affirmation of spirituality. When I sit down to contemplate one of my cuts, I sense all at once an enlargement of the spirit, I feel like a man freed from the shackles of matter; a man at one with the immensity of the present and of the future" (Lucio Fontana cited in: Exh. Cat., New York, Solomon R. Guggenheim Museum, Lucio Fontana: Venice/New York, 2006, p. 23). Radiating with an intangible luminescence, Concetto spaziale, Attese exemplifies the artist’s pioneering aesthetic in which colour, movement and space triumphantly converge. 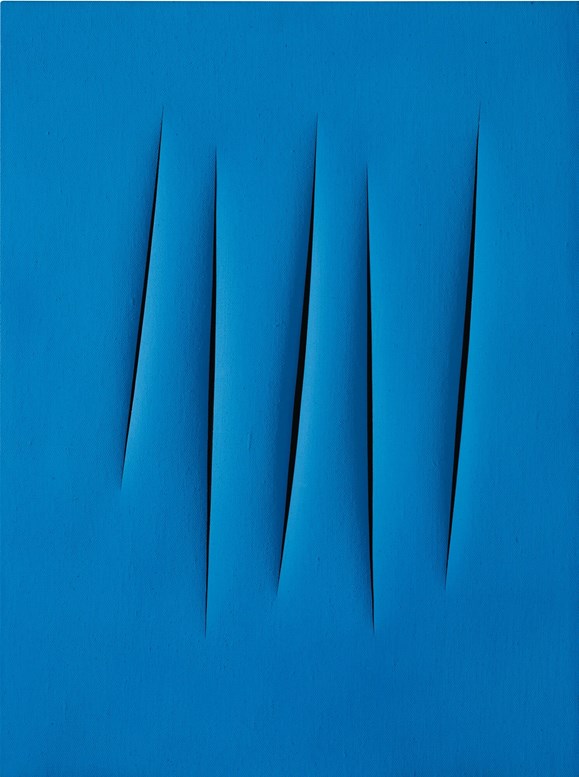