From an Indian Summer and Other Seasons 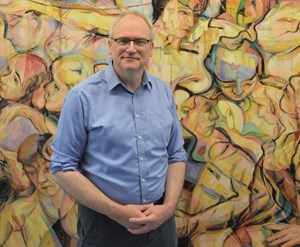 British artist Clive Head tells about his current exhibition "From an Indian Summer and Other Seasons", that is being displayed by Waterhouse & Dodd through 18 October 2019 in London. "Taken as a whole, this exhibition testifies to my on-going commitment to painting as a response to my existential presence in the world".

Image: Clive Head with “The Bar Raiser” 2019, image courtesy to the artist

My forthcoming exhibition at Waterhouse and Dodd marks a welcome return to the London art scene having spent several years showing almost exclusively abroad. My last solo show in London was back in 2012. There has been a steady development since that exhibition of urban landscapes. The title of this new show “From an Indian summer and other seasons” alludes to the selection of works from different projects since then including two major paintings from the “Indian Summer Series” completed in the past year. Clive Head with “The Bar Raiser” 2019, image courtesy to the artist

Taken as a whole, this exhibition testifies to my on-going commitment to painting as a response to my existential presence in the world. The changing characteristics of the work, which could be summarised as a transition from a quantifiable realism to a highly ambiguous morphological figuration might be attributed to a greater accountability to the truly complex nature of being. The paintings made 8 years ago had begun to replace my static position in time and space which underpins Western perspective with viewing the world from different vantage points and over a period of time. This exhibition begins at the point where, as the spatial and temporal dimensions became greater, the seamlessness of the space is replaced by a new geometry that allows for fracture and layering.

The latest paintings begin, for the most part, with my experience of being in the city. This might be a morning spent in London or recollections of a week spent in New York. Both “Elephant in the Room” and “The Bar Raiser” began with a trip to New York with my wife and eldest daughter, Rachel, but neither of these paintings could be aptly described as being of New York. Take “Elephant in the Room”. The origins of this painting could be traced back to my wife waking in our New York apartment, and then our walk with Rachel through Chinatown and journey on the Subway. The painting has a nominal likeness to these events but a much greater “unlikeness” which would suggest a different agenda. Dante via Bank, image courtesy to the artist

“Elephant in the Room” is altogether more mysterious and elusive, darker and tapping into references that have little to do with the mundanity of the events on which it was sourced. This expansion into other areas might be due to a greater openness within the painting practice and a recognition that my “being” in the studio cannot be suspended in deference to the selected subject matter on which a painting is initially begun. In short, the stream of experience which might have started on the street continues as I paint, and the painting must keep apace with that reality.

Which means that these current paintings have an unfathomable complexity. They may be true to where I have been, who I have met, but they are equally true to events as I paint, and my thoughts and dreams. The viewer is invited to consider a gallimaufry of possible narratives. The title “Elephant in the Room” might suggest a pervading subject that transcends the anecdotal details, if only we take the time to stand back and see it. My friend, the musician Jools Holland, suggested that the elephant was clearly a pervading eroticism. Perhaps, but equally the “elephant” may well be an actual elephant or many elephants. That complexity so rapidly descends into such unexpected imagery, surreal and absurd has, for me, become this project’s most fascinating feature. There is always a delight in recollecting what is known, but it is astonishing when the painting reveals to me motifs that I do not understand. Through playing with space and time, I create a web which catches the unexpected. Very little of what is presented at the completion of a painting is conceived at its beginning. Instead, imagery is layered and juxtaposed and gives birth to new imagery and narratives. It is a consequence of the act of painting.

“The Bar Raiser” is now a rhythmic interchange of figures, yet very few of these figures were witnessed, and nothing now is testimony to its actual form. I continue to collect information through taking thousands of photographs, and these are valuable in initiating a drawing, but as the drawing progresses and subsequently becomes the catalyst for a painting, I only refer to the existing state of the painting to guide me. When painting, there is no reference material to work from, its just me and the canvas fixed to the wall. All that I have experienced now exists only as thought and must find its space and form through the activity of pushing the paint around.

A figuration in which there are multiple images, where one motif dissolves to allow the realisation of another, is based on the interrelationship between things, the place something has in relation to everything else. Nothing can be considered in isolation, singled out and presented in its own terms. The existence of one thing in the painting is entirely dependent on the existence of everything else. The challenge then is not to paint a figure but to find the configuration of marks, lines, colours that will create all the figures. As a painting challenge, this rather “raises the bar” and trying to find the right solution can be exhausting. For the most part, the painting is adrift. Before it is everything, it is nothing.

If the optimum solution is expressed in terms of space, both across and beyond the picture plane, it is time spent in the studio, the layering of tentative propositions over many days, weeks and months of painting that gradually nudges towards this end. The fracturing then, that is evident in “The Bar Raiser” is as much to do with the layering of pictorial solutions over time, as the placing of one patch of colour against another. In preparing for this exhibition, I chose two canvases from the five that make up “The Indian Summer Series” extensively re-working both. 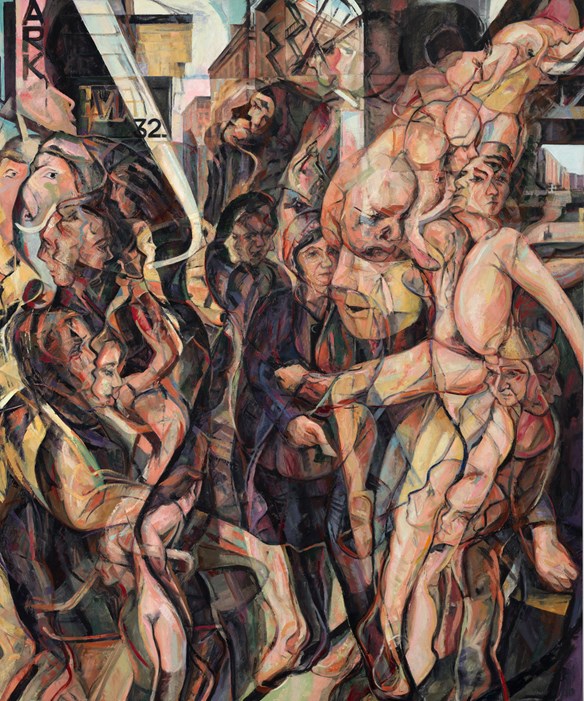 Elephant in the Room, image courtesy to the artist

The most recent painting in the show “Dante via Bank”, is the first of a series of smaller canvases which are anchored on a more centred cluster of figures. As with so many of my paintings, what began as an urban landscape, an Underground journey on the Northern Line, also became a journey back through mythology, and in this case, the underworld as I stumbled into a figure of Dante. Just as the interconnectivity between the formal elements is fundamental to the complexity of motifs, so the synaptic associations between narratives and between words, have coloured this new work. It happens without much considered planning and continues to intrigue and entertain me.

I hope others also find it engaging.