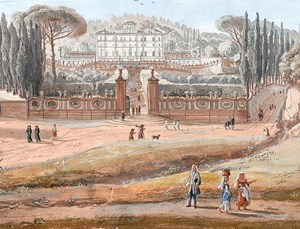 This large and refined tempera by Vanvitelli depicts the Villa Aldobrandini at Frascati, seen from the square below (now known as Piazza del Municipio).  The buildings to the left, on which the artist has signed his initials, at the time contained the stables. There are four documented versions in oil of this famous and handsome veduta, one of which, formerly with Galleria Gasparrini, Rome, is dated 1707, but this is the only known depiction of the view by Vanvitelli in tempera. 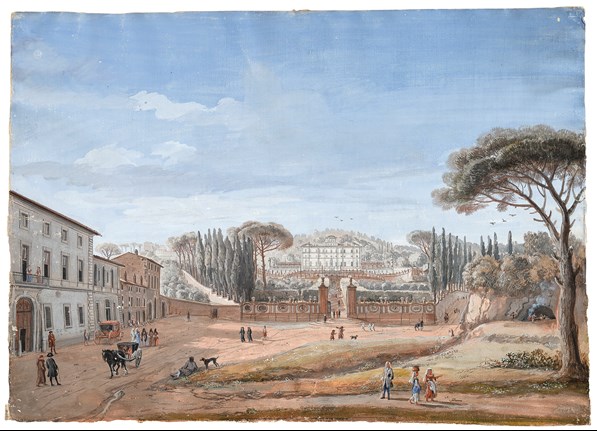 The monumental Villa, first built in 1550, was converted by the architect Giacomo della Porta (1532-1602) in 1598 for cardinal Pietro Aldobrandini (1571-1621), the nephew of Pope Clemens VIII (1592-1605).  The entrance gate with the decorative walls, segmented and with oval openings, was commissioned in 1693 by Prince Giovanni Battista Pamphili (1648-1709) from the architect Carlo Francesco Bizzaccheri (1656-1721).  The Pamphili family owned this property from 1681 (following the death of Olimpia Aldobrandini Pamphili) until 1763, so when Vanvitelli painted this view and the four oil versions, the villa was already in their possession.  Vanvitelli seems to have left his native Netherlands in 1674 and is first recorded in Rome in January 1675. A terminus post quem for the dating of the present tempera is, however, provided by the inclusion of the new gate of the Villa. 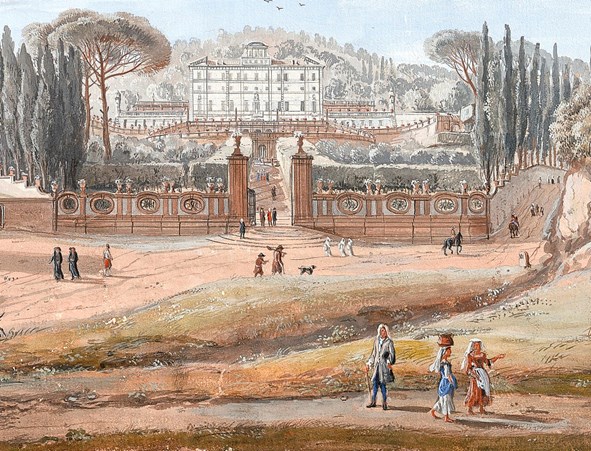 We are grateful to Laura Laureati, for confirming the attribution to Vanvitelli, having seen this work in the original, and for suggesting that, like the related oil paintings, it was executed during the first years of the 18th century.  It is very plausible that the present tempera is the one mentioned in the Galleria of the Palazzo Albani, in Urbino, and recorded in Nardini's 1931 inventory: Quadretto rappresentante una Villa, dipinto a tempera da Gaspare Vanvitelli.