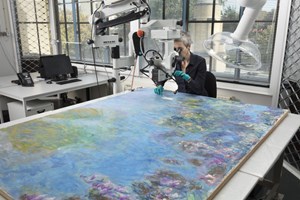 Conservator Ruth Hoppe got the surprise of her life when she looked at the x-ray of Wisteria. This masterpiece, one of three paintings by Claude Monet (1840-1926) in Gemeentemuseum Den Haag’s collection, was removed from the museum for the first time several months ago and taken to the conservation studio. To investigate the damage to the canvas Hoppe had it x-rayed and had several other tests carried out on it.

Conservator Ruth Hoppe got the surprise of her life when she looked at the x-ray of Wisteria. This masterpiece, one of three paintings by Claude Monet (1840-1926) in Gemeentemuseum Den Haag’s collection, was removed from the museum for the first time several months ago and taken to the conservation studio. To investigate the damage to the canvas Hoppe had it x-rayed and had several other tests carried out on it.

She never imagined that, besides learning more about the damage the painting had sustained, she would also discover a group of water lilies. ‘Wisteria was already a very special painting, actually’, explains curator Frouke van Dijke. ‘There are only seven paintings by Monet with this subject. But of course the water lilies are the iconic Monet image. The fact that there are also water lilies under Wisteria makes the painting all the more special, and it also adds a number of pieces to the puzzle in the story of this public favourite.’ 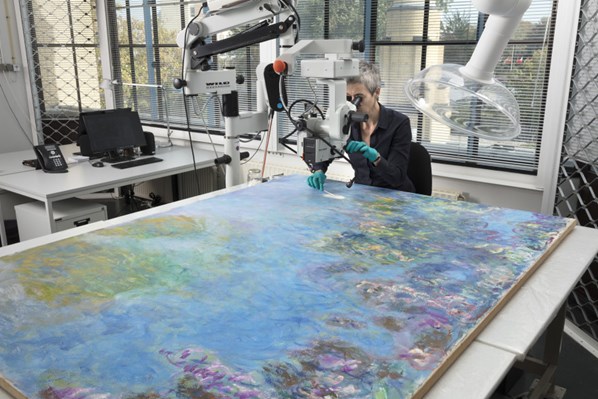 Wisteria (1917-1920) is one of the most expressive paintings Claude Monet ever produced. He was around eighty years old when he painted it in his garden at Giverny, near Paris. It was there that he also painted his world-famous water lilies. As far as we know, during his life he produced only seven paintings of wisteria. This painting became part of Gemeentemuseum Den Haag’s collection in 1961, and it has been on display in the museum almost continuously ever since.

In the runup to Monet. The Garden Paintings, an exhibition that will open later this year, and to ensure that future generations can continue to enjoy this beautiful painting, the Gemeentemuseum initiated a thorough study of this vulnerable work prior to its conservation. Ruth Hoppe was able to look at the painting under a microscope for the first time. She removed the layer of varnish that was applied after Monet’s death and revealed some ugly retouches covering some odd-looking damage. In February 2019 the museum enlisted the help of the public, launching a crowdfunding campaign to help fund further investigations.

Meanwhile, an art-historical study being conducted at the same time found that the damage to the canvas probably occurred during the Second World War. Hundreds of tiny shards of glass had penetrated the canvas from the back. A triptych of water lilies at MoMA in New York has similar damage, caused when the glass roof of Monet’s studio collapsed. Many years after Monet’s death these paintings were still in his abandoned studio when there was heavy fighting around Giverny during the war. The x-ray was taken in order to thoroughly examine the damage before the canvas was treated.

After Monet’s death, Wisteria and many other paintings he had made in Giverny remained untouched in his studio because virtually no one was interested in the master of impressionism at the time. Monet’s garden paintings – nowadays his most admired and coveted works – were not properly appreciated until a 1952 travelling retrospective exhibition co-organised by Gemeentemuseum Den Haag. From the 1950s onwards many modern American artists like Kelly and Rothko expressed their admiration for the Giverny paintings, and suddenly these previously maligned almost abstract works were very much in demand. This explains why the damage to Wisteria was retouched so quickly and carelessly before it was sold. The recent discovery adds some pieces to the story behind this public favourite.

The discovery of the water lilies under Wisteria is a particularly special piece of this puzzle, as curator Frouke van Dijke explains. ‘The discovery suggests that this piece was an experiment by the artist, perhaps even the first painting Monet made in the wisteria series. But we can’t say for sure.’ ‘I have this romantic image of Monet waking up one day and deciding he wanted to paint something other than water lilies’, Ruth Hoppe continues. ‘I see him going to his studio, taking a water lily canvas he’d painted before, scraping off parts of the old paint and painting his way to the right composition for this new subject.’ ‘We can never know for sure’, says Van Dijke.