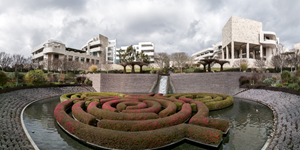 The iconic Getty Center was the result of 15 years of research, planning, design and construction.  After purchasing the hilltop site in the Sepulveda Pass in 1982, the Getty invited 33 architects to submit qualifications.  In 1984, Richard Meier was selected as the architect. Construction began in 1989 – and was briefly halted by the Northridge earthquake in 1994. In December of 1997, the Getty Center opened to the public, with initial demand for visits so strong that advance parking reservations were required for the first few years.

Since then, more than 20 million visitors from all over the world have come to the hilltop campus, where admission is free (and no reservations are necessary). More than 160,000 K-12 students visit each year, including more than 130,000 from Title One schools, whose transportation is subsidized by the Getty.

“The Getty Center was envisioned as a destination where people could come for inspiration and contemplation,” said Getty President and CEO James Cuno.  “That vision came true, and we’re honored to host visitors from across the globe, as well as our neighbors here at home. But by coming together in one location, the Getty programs were also transformed, becoming infinitely greater than the sum of their parts.”

Working together from their hilltop campus in Los Angeles over the last 20 years, the Getty Conservation Institute, Getty Foundation, J. Paul Getty Museum, and Getty Research Institute have helped conserve, study and present Old Master panel paintings in Europe, ancient mosaics in the Middle East, icons from the Sinai Desert, cave temples in the Gobi Desert, contemporary video art in Latin America, modern architecture in India – and much more.

“In the 20 years since the Getty Center opened, the Getty has begun to fulfill its potential as the world's largest cultural and philanthropic organization dedicated to the visual arts,” said Maria Hummer-Tuttle, chair of the Getty Board of Trustees. “We are able to look around the world and see the benefits of our research and work on every continent.”

Image on top: The Getty Center as seen from the garden. ©Robert F. Tobler