Ghana Pavilion at The Venice Biennale Presents Black Star: The Museum as Freedom 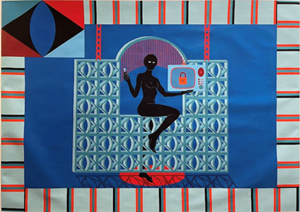 The Ghana Pavilion at the 59th International Venice Biennale, under the patronage of Ghana’s President Nana Addo Dankwa Akufo-Addo, will be on show to the public from Saturday, April 23 until Sunday, November 27, 2022.

The Ghana Pavilion at the 59th International Venice Biennale, under the patronage of Ghana’s President Nana Addo Dankwa Akufo-Addo, will be on show to the public from Saturday, April 23 until Sunday, November 27, 2022.

Following its highly acclaimed debut at the 2019 Biennale, Ghana will present the exhibition Black Star—The Museum as Freedom. Titled after the Black Star that symbolises Ghana through its flag, national football team, and most important monument, it also became a symbol of the connection of Africa with its diasporas through Marcus Garvey’s Black Star Line and his Back-to-Africa movement revived now in Ghana as Beyond the Return; as well as for Pan-Africanism and anti-colonialism with the symbol described as the “Lodestar of African Freedom.” The pavilion exhibition examines new constellations of this freedom across time, technology and borders. It includes large-scale installations by Na Chainkua Reindorf, Afroscope and Diego Araúja, in an exhibition designed by architect DK Osseo Asare, and curated by Nana Oforiatta Ayim, Director of ANO Institute of Arts & Knowledge in Accra and Director at Large of Ghana’s Museums and Cultural Heritage.

Na Chainkua Reindorf takes masquerade and secret society traditions that historically were largely male, and creates her own mythology of Mawu Nyonu, a fictional secret society made of seven women, at one with the elements around them.

This notion of oneness is taken further by Afroscope’s work Ashe, which explores the spirit that runs through all the elements, using technology as a translator of the flow of life, as exemplified by water.

The theme also underpins Diego Araúja’s work, A Congress of Salt, in which the Atlantic Ocean that served to separate those taken from the shores of West Africa to its diasporas, now acts as a unifier, the birthplace of a new creole.

The installation in Venice will be designed by architect DK Osseo-Asare, co-founding principal of Low Design Office (LOWDO), a trans-Atlantic architecture and integrated design studio based in Ghana and Texas.

The Venice exhibition is framed by Nana Oforiatta Ayim’s concept of the Mobile Museum, which travels into communities across Ghana in co-curation and exchange, with the aim of creating accessible, contextual, inclusive spaces. In Venice, the Mobile Museum programme will be presented during the Biennale Arte season with events and workshops created in collaboration with diverse communities across the city.

Nana Oforiatta Ayim said: “How do we dream into existence new narratives, languages, structures? Ghana in its 65th year still grapples with political, economic, cultural, social and knowledge systems not made of or for its contexts. Systems created within its communities over thousands of years were deemed inferior to ones termed ‘universal’ by dominant powers. As we outgrow and move beyond ill-fitting systems; new ones, not yet defined, that draw on rich histories, not with nostalgia but with discernment of hindsight and experience; are forming.”

Nana Oforiatta Ayim, curator
Nana Oforiatta Ayim is a writer, filmmaker, and art historian who lives and works in Accra, Ghana. She is founder of the ANO Institute of Arts and Knowledge, through which she has pioneered a Pan-African Cultural Encyclopaedia, a Mobile Museums Project, and curated Ghana’s first pavilion at the 58th International Venice Biennale. She published her first novel The God Child with Bloomsbury in 2019, and with Penguin in German in 2021. She has made award-winning films for museums such as Tate Modern, LACMA and The New Museum, and lectures a course on History and Theory at the Architectural Association in London. She is the recipient of various awards and honours, having been named one of the Apollo “40 under 40”; one of 50 African Trailblazers by The Africa Report; a Quartz Africa Innovator in 2017; one of 12 African women making history in 2016 and one of 100 women of 2020 by Okayafrica. She received the 2015 the Art & Technology Award from LACMA; the 2016 AIR Award, which “seeks to honour and celebrate extraordinary African artists who are committed to producing provocative, innovative and socially-engaging work”; a 2018 Soros Arts Fellowship, was a 2018 Global South Visiting Fellow at Oxford University, was appointed to the Advisory Council of Oxford University’s Cultural Programme in 2020, was a Principal Investigator on the Action for Restitution to Africa programme, and is currently Special Advisor to the Ghanaian Minister of Tourism, Arts and Culture on Museums and Cultural Heritage.

DK Osseo-Asare, architect
DK Osseo-Asare is co-founding principal of Low Design Office (LOWDO), a trans-Atlantic architecture and integrated design studio based in Ghana and Texas. He co-founded the Ashesi Design Lab as Chief Maker and is Assistant Professor of Architecture and Engineering Design at Penn State University, where he runs the Humanitarian Materials Lab (HuMatLab) and serves as Associate Director of Penn State’s Alliance for Education, Science, Engineering and Design with Africa (AESEDA). DK Osseo-Asare creates architecture with and for the people that design overlooks.

Na Chainkua Reindorf, artist
Na Chainkua Reindorf is a mixed media artist and mythmaker. Her work, which ranges from large-scale tapestries to immersive sculptural installations, is an exploration of and an ode to the rich cultural history of West African textiles, focusing largely on the complexities and visual culture surrounding masquerades and ceremonial costumes. She incorporates contemporary materials into her work, using these historical textiles and costumes as inspiration to investigate ongoing social topics centered on the politics of dress, identity and gender and their close relation to culture and tradition. Na Chainkua has exhibited internationally in institutions across the United States, as well as in France, Nigeria and Ghana.

Afroscope, artist
Afroscope is a speculative artist and designer for whom art-making is an attempt to deconstruct normative reality and challenge popular tropes by imagining transcendental visual narratives that comprise otherworldly beings, speculative dreamscapes and peculiar forms. He straddles the worlds of myth, mystery and automatism in his work, and sees art as portals into a multiverse of realities. He has exhibited widely in Ghana and Europe and was winner of the 2017 Kuenyehia Prize for Contemporary Ghanaian Art, Ghana’s foremost art award.

Diego Araúja, artist
Diego Araúja is an artist born in Salvador-BA, Brazil, where he lives and works as an artist, director, and writer. He has directed the Creole Time process since 2015, considering the ongoing traumatic experience of Afro-Diasporic peoples and their descendants, He was director, playwright, and producer at Teatro Base from 2010 to 2017. In 2017, Diego Araúja and artist Laís Machado founded ÀRÀKÁ Platform, a space of creation and connection between Afro-Atlantic artists. He conceived a choreographic performance for the video installation A Marvelous Entanglement by artist Isaac Julien in 2018, was invited to artist residencies at Atlantic Center For The Arts in 2018 and SAVVY Contemporary in 2020. In 2019, he was invited by the German Ministry of Foreign Affairs to represent Brazil for the 56th Theatertreffen. In 2020, he participated in the Iberoamerikanisches Theaterfestival with his work QUASEILHAS. And in 2021 created an ephemeral architecture with the name “Lands Giving Birth Gold” connecting Brazil and Ghana through their respective work songs.

Exciting News: ArtDependence now has an art store on Artsy. Click the Artsy banner to see the brilliant works on view.