“Giacometti’s portraits are about the interrogation of appearance” - Paul Moorhouse, National Portrait Gallery 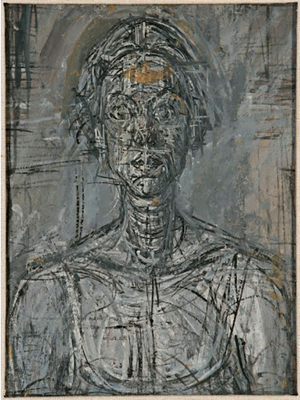 Coming October 15th, the National Portrait Gallery in London will present the major exhibition “Giacometti. Pure Presence”, which will focus, first and foremost, on Alberto Giacometti as a portraitist. The exhibition will feature portraits depicting Giacometti’s closest circle: family members and friends who were near the artist in the different periods of his life, and some were present almost throughout all of his career, from 1914 to 1966. The exhibition centers on the fascination that particular sitters drew from Giacometti, and the various ways in which they influenced his creative genius.

“Giacometti’s portraits are about the interrogation of appearance” - Paul Moorhouse, 20th century curator at the National Portrait Gallery in London speaks about the upcoming exhibition: “Giacometti. Pure Presence”

Coming October 15th, the National Portrait Gallery in London will present the major exhibition “Giacometti. Pure Presence”, which will focus, first and foremost, on Alberto Giacometti as a portraitist. The exhibition will feature portraits depicting Giacometti’s closest circle: family members and friends who were near the artist in the different periods of his life, and some were present almost throughout all of his career, from 1914 to 1966. The exhibition centers on the fascination that particular sitters drew from Giacometti, and the various ways in which they influenced his creative genius. Giacometti’s multifaceted preoccupation with the human body can be observed in his paintings, drawings and sculptures. Paul Moorhouse, curator of the exhibition,talks to Artdependence Magazine about the assembling process for one of the most important upcoming exhibitions this autumn, and shares his discoveries about the artist’s life and his oeuvre.

Artdependence Magazine: As curator of “Giacometti. Pure Presence”, please tell us whether it was a big challenge pulling this exhibition together? Were there private collectors involved, or was it mostly drawn from by the Alberto and Annette Giacometti Foundation?

Paul Moorhouse: It was a big challenge to assemble this exhibition. Not least because we are dealing with one of the great figures of 20th century art, one of the giants of modernism. In assembling this exhibition we wanted to borrow  key examples of his work, but also the precise combination of works, which would underpin with a very particular approach that we are taking. This is not a conventional Giacometti exhibition. Lots of exhibitions of Giacometti in the past have followed a standard course:they concentrated on the Paris works, abstract sculptures, surrealist sculptures, and the existential sculptures. We are doing something very different: we are showing the other side of Giacometti’s work, which involves portraiture, right across his career from 1914 till 1966. To do that we had to find very particular works, which show Giacometti’s engagement with portraiture, and we wanted to get the very best works as well. So, in order to do that we have borrowed from collections around the world, both public and private. I started this process by approaching both Giacometti’s foundations. First of all, the foundation in Zurich, who were enormously helpful and very supportive of the theme for the exhibition. We also had a discussion with the Foundation in Paris, who were equally helpful. They really supported us, providing us with the really important loans. We had to go elsewhere, of course, to assemble other aspects of Giacometti’s involvement with portraiture. And we ended up with 65 of his finest portraits, which is quite an accomplishment. It’s five years work. 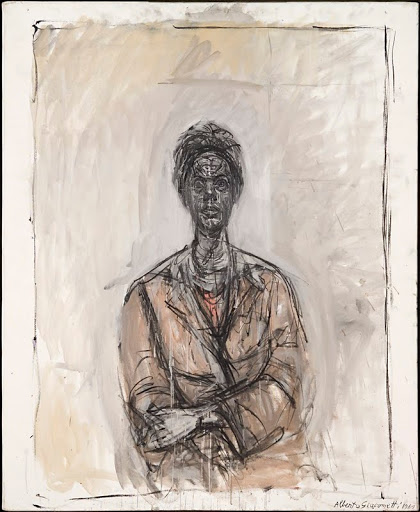 AD: The exhibition focuses on Giacometti’s portraits. The human head is a central subject in his work, something which he evidently studied throughout his career. Does the exhibition include all artistic media that Giacometti used in his work: sculpture, prints, paintings, and drawings? And does it also cover the span of his career, including also his African period, his practices in cubism and surrealism?

PM: Yes, one of the really important aspects of this exhibition is the focus on Giacometti’s involvement with particular sitters. It’s not just a chronological walk through his work. What we have done is to highlight Giacometti’s main models. There are individual rooms, devoted to member of his family, or to his sitters in Paris and in Switzerland. His main sitters in the post-war period are his mother Annetta, his wife Annette, Diego - his brother, then the circle of his intellectual and artistic contacts in Paris - James Lord, his biographer, Jean Genet, the playwright, major collectors like David Thompson, and members of his family, including Nelda – a  picture that many people have not seen before. And then the final room is dedicated to Caroline, the young woman he became obsessed with right at the end of this life. There are 6 portraits of her. And in each of these cases it has been really important to show his response in terms of sculpture, painting and drawing - all in dialogue - because each of these layers of his studio work feed each other. In each of these cases all of these different media are mutually reinforcing, so they really interact in the development of the final portrait image. 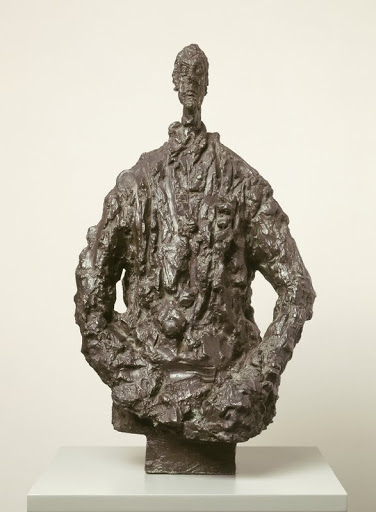 AD: Giacometti’s “dark heads” series depicts a “generic” and anonymous man concept, which was described by Sartre as: “A whole man, made of all men, worth all of them, and any one of them worth him”. Can you explain what this concept meant to Giacometti?

PM: Giacometti is very well known for his standing women and walking men, and his pointing man. These are generalized figures, highly abstracted, anonymous figures evoking a human presence. This is how I have approached him. That’s the familiar presentation of Giacometti’s work. There is one such figure in this exhibition - one of the "Women of Venice" series of 1956, and I put it in the center of the exhibition because I wanted to acknowledge this more well-known feature of Giacometti’s work. This is what people will come to the exhibition expecting to see, but it is not what we are dealing with. What we are doing is showing where these figures come from. For the first time, I think, we are able to show that the source of these figures is actually Giacometti’s involvement with particular sitters: with women such as Annette or Caroline, or with particular male models such as Diego. And what you see happening in the exhibition is a progressive abstraction, so that Giacometti works from very detailed observations from which he progressively abstracts the human presence. Out of that comes the better-known body of work, which are the anonymous figures. 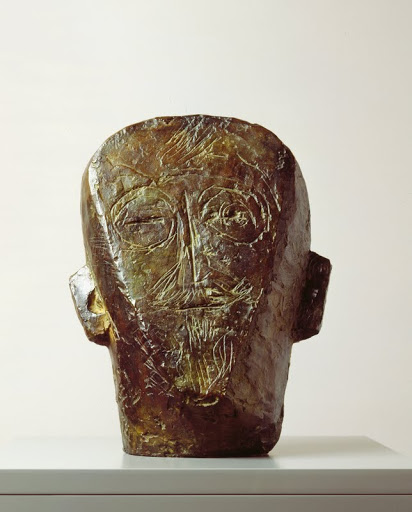 AD: For a curator every exhibition is, in a way, a research project. Did you discover something new for yourself when preparing the exhibition?

PM: I did. I discovered lots of things about Giacometti, which certainly took me by surprise. I thought that Giacometti was among the most well-known artists of the 20th century, and that there is nothing else to discover about Giacometti. One of the main discoveries was the double life of Giacometti. The idea of Giacometti that is generally recognized is one of him as a solitary figure working in his studio in Montparnasse in Paris, devoted to his art and completely obsessed with making stick like figures. The big realization was that this story is correct but incomplete. What I discovered is that, alongside that life, Giacometti had another life: almost since the beginning of his time in Paris in 1922, he made regular visits to Switzerland where he stayed in a family home at Stampa. He had a different studio in Switzerland and throughout that period, from 1925 to 1935 - all the time when he was claiming to have given up making figurative work,saying that it was necessary to “abandon the real” - he continued to make portraits. And, in fact, throughout his life his involvement with portraiture never ceased. So that was the first enormous realization, that I had underestimated: there are two Giacometti’s - one in Paris, one in Switzerland; and his involvement with portraiture is much more than one has ever imagined.

The second realization is that Giacometti, being one of the greatest artists of the 20th century, is also one of its most important portraitists. Giacometti’s portraits are like no other portraitist’s work. They don’t have to do with literal appearance, they are not about the biography of the sitter, they have nothing to do with life achievements and they do not individualize the sitter in any particular way. There is no sign of the sitter’s psychology. All this is irrelevant to Giacometti, or beyond his interest anyway. So what are the portraits about? And this is another realization: that Giacometti’s portraits are about looking,to an extent that I think is unrivaled by any other artist of the 20th century. They are about the interrogation of appearance; the will to engage with what you see and to test you own responses to what you see. This is where his portraits come in. It’s truly an engagement with another human being in the space of the studio. He absolutely interrogates the process of looking and the complexities of seeing. No other artist does that to such an extent. 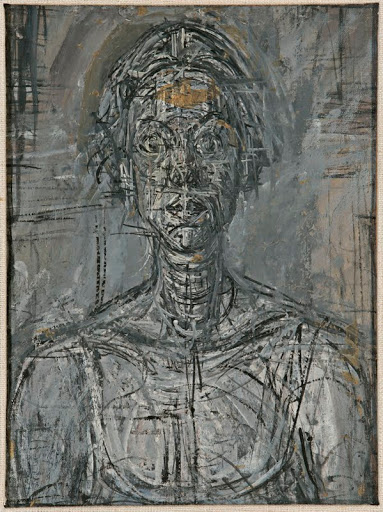 AD: You have also been working on a book: Giacometti. Tell us a bit about it. Are these observations included in the book?

PM: Yes, they are. The book is being published to accompany the exhibition. So, it includes all the works that we are exhibiting, as well as other works. It also contains a text I have written, laying out the chronology of his life, exploring the double life that he led. The book develops the theme of the exhibition in detail. It does ask the question, what Giacometti’s portraits are about, and it tries to deliver a more detailed response to this question. I talk about all the crises that Giacometti went through,which he experienced in relation to his attempts to copy what he saw. Why it was such a problem for him, why it was so difficult, and why this led him to moments of despair. I also write about the epiphanies he experienced. There were moments of incredible insight in his life when he said: I saw things, as they have never appeared before.

More information about the upcoming exhibition is here.

Many thanks to Mr. Evans for his support.